In an emergency letter to the governments of the European Union and the United States, Dr. Matthias Rath is calling for the immediate suspension of mandatory anti-COVID vaccinations using RNA- and DNA-based approaches. Citing game-changing new research published in the scientific journal Viruses, Dr. Rath describes how these highly experimental medical interventions have now been shown to risk potentially devastating side effects. Carried out by scientists from the universities of Stockholm and Umea in Sweden, the Viruses study found that the SARS-CoV-2 spike protein is able to reach the cell core (nucleus) and significantly inhibit DNA damage repair. The effective repair of DNA – the biological software of each cell – is essential for maintaining our immune defense and protecting against a multitude of diseases, including cancer.

The Swedish scientists warn that their findings imply a significant risk of severe long-term side effects from COVID vaccination strategies, since currently used vaccines either directly inject SARS-CoV-2 spike proteins into the body or induce their production in it. Based on this discovery, it is now no longer a question of whether these vaccines will cause an avalanche of side effects and new diseases, but when.

As Dr. Rath points out in the letter, the publication of this new research comes at a time when politicians – under pressure from European and American vaccine manufacturers – are calling for population-wide mandatory anti-COVID vaccinations to be given, including in children. Already in the past few days, the government of Austria has announced that vaccination against COVID-19 will become mandatory in their country from February 2022. Austrians who refuse to be vaccinated will receive $4,000 fines.

Given the clear health risks from DNA- and RNA-based vaccines, Dr. Rath is calling for the world’s political decision-makers to suspend all further use of them. “Any other decision is irresponsible,” he says, “and knowingly endangers the health and lives of millions of people.” Dr. Rath adds that the need for such action “is even more compelling since effective and safe approaches to COVID are readily available.”

While presently still ignored by the world’s political leaders, the fact is that high-dose vitamin C remains the only therapeutic approach that has been clinically shown to significantly reduce the mortality rate from advanced COVID-19. A randomized, placebo-controlled clinical intervention study conducted in patients at advanced stages of coronavirus infection found that high-dose vitamin C cut the death rate almost in half compared to a control group that received the placebo.

Additional research published in February 2021 by scientists at the Dr. Rath Research Institute has documented that combining vitamin C with other specific micronutrients can inhibit all key mechanisms of coronavirus infection. This finding built on previous studies published by the institute’s scientists in July and August 2020, which had demonstrated that specific combinations of micronutrients can block the entry of SARS-CoV-2 into human cells.

Given the availability of scientifically proven natural alternatives to anti-COVID vaccines, Dr. Rath is calling for political leaders to immediately take advantage of them to fight the coronavirus pandemic. He is also demanding that an investigation be launched into the potential side effects of the vaccines and is stressing the importance of this being carried out independently of the vaccine manufacturers.

Following the issuing of Dr. Rath’s letter, European and American political leaders are in possession of the scientific facts. In any forthcoming liability litigation brought against them or their governments, they will therefore be unable to use the defense that they “didn’t know.” The ball is now in their court, and millions of people worldwide are awaiting their response. 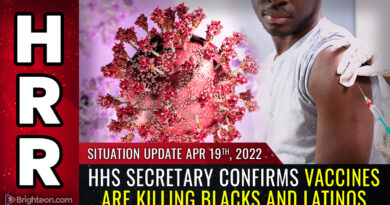 Why Is the FDA Hiding the Pfizer Vaccine Data?