During his interview on the Joe Rogan podcast last week, Dr Robert Malone explained the truth about mass formation psychosis. Malone was shortly afterwards de-platformed by Twitter. He says he doesn’t know which tweet got him banned from the platform.

This clip of him from that podcast then was tweeted out by Dr Peter McCullough who also recently appeared on Rogan’s podcast, both of which have been censored and removed by YouTube.

“Mass formation psychosis” went on to trending mightily on Twitter Saturday and the search term then practically broke Google. They have since settled on having the first result be a hit piece against Malone by the Daily Dot, the same shill website that did a hit piece on me last year.

What the heck happened in Germany in the ’20s and ’30s? Very intelligent, highly-educated population and they went barking mad.

How did that happen?

The answer is mass formation psychosis.

When you have a society that is de-coupled from each other and has free-floating anxiety and a sense that things don’t make sense, we can’t understand it.

And then, their attention gets focused by a leader or series of events on one small point, just like hypnosis, they literally become hypnotized and can be led anywhere.

And one of the aspects of that phenomenon is the people who they identify as their leaders, the ones that typically come in and say, “You have this pain and I can solve it for you – I and I, alone – can fix this problem for you.

Then, they will follow that person. It doesn’t matter whether they lied to him or whatever. The data are irrelevant.

And furthermore, anyone who questions that narrative is to be immediately attacked. They are the other. This is central to mass formation psychosis.

And this is what has happened. We had all of those conditions.

If you remember back, before 2019, the world doesn’t make sense, we’re all isolated from each other, we’re all on our little tools [cell phones, etc], we’re not connected socially anymore, except through social media, and then, this thing happened and everybody focused on it. That is how mass formation psychosis happens and that is what’s happened here. 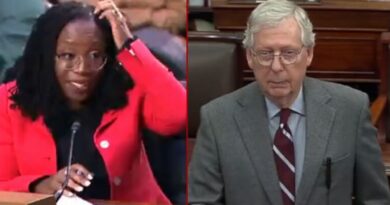 GOP Immigration Cucks Crawling Out Of Holes, Despite Massive Base Disapproval