To succeed in politics, business or entertainment, you must sell your soul to the devil, aka Rothschild.

People like George Soros, Obama, Trump and Klaws Swab and the rest of these scoundrels are front men.
Unmasked: Klaus Schwab’s School for Covid Dictators, the Master Plan for ‘Great Reset’
by Michael Lord
(abridged by henrymakow.com)
Economist Ernst Wolff believes a hidden alliance of political and business leaders is exploiting the pandemic with the aim of collapsing national economies and introducing a global digital currency.

How come more than 190 governments from around the world ended up dealing with the COVID-19 pandemic in almost exactly the same way, with lockdowns, mask mandates, and vaccination cards now commonplace everywhere? …

The answer may lie in the Young Global Leaders School, founded and led by Klaus Schwab of the World Economic Forum, and which many of today’s prominent political and business leaders have gone through on their way to the top.

In 1992, Schwab founded the Global Leaders for Tomorrow school, which was re-established in 2004 as Young Global Leaders. Entrants to the school must submit an application for admission and are then subjected to a rigorous selection process.

Among the members of the school’s very first class in 1992 were many who later became important liberal politicians, such as Angela Merkel, Nicolas Sarkozy and Tony Blair. There are currently about 1,300 graduates of this school, and the list of alumni includes several names of those who later became leaders of the health institutions of their respective countries. Four of them are former and current health ministers for Germany, including Jens Spahn, who has been federal health minister since 2018.

Other notable names on the school’s roster include

Jacinda Ardern, the Prime Minister of New Zealand, whose strict lockdown measures have been praised by global health authorities;
Emmanuel Macron, the President of France;
Sebastian Kurz, who until recently was the Chancellor of Austria;
Viktor Orbán, Prime Minister of Hungary;
Jean-Claude Juncker, former Prime Minister of Luxembourg and President of the European Commission;
Annalena Baerbock, the leader of the German Greens, who was the party’s first candidate for Chancellorship in this year’s federal election, and who is still in the running to become Merkel’s successor. 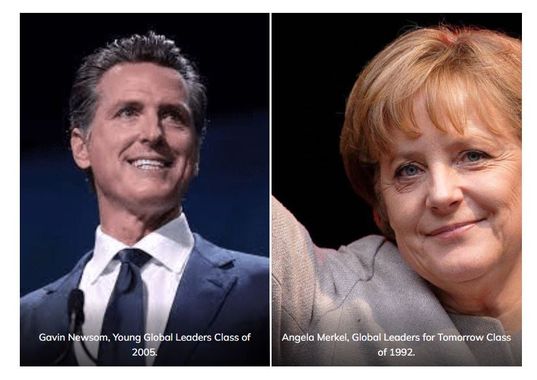 California Governor Gavin Newsom is also on the list. He was selected for the class of 2005, as was former presidential candidate and current US Secretary of Transportation, Peter Buttigieg, who is a very recent alumnus, as he has been selected for the class of 2019. All these politicians who spent the last two years in power have been in favor of tough responses to the COVID-19 pandemic, which has also significantly increased the power of their respective governments.

But the list of the school’s alumni is not limited to political leaders. We also find many private industry leaders, including Bill Gates of Microsoft, Jeff Bezos of Amazon, Richard Branson of Virgin and Chelsea Clinton of the Clinton Foundation. All of them, too, expressed support for the global response to the pandemic, and many have made significant gains as a result of the measures….

In 2012, Schwab and the WEF established yet another institution, the “Global Shapers Community”, which brings together individuals under 30 with leadership potential from around the world. To date, approximately 10,000 participants have completed this program, and they hold regular meetings in 400 cities. Wolff believes that this is yet another testing ground where future political leaders are selected, vetted and groomed before they take their place in the world’s political apparatus.

Wolff points out that very few Global Leaders School graduates mention this on their resume. He says he’s only seen one, that of German economist Richard Werner, who is a noted critic of the establishment. Wolff suggests the school is happy to include even critics of the system in its ranks, as another name among the graduates is Gregor Hackmack, the German head of Change.org, who was in the 2010 class. Wolff thinks this is because the organization wants to present itself as fair and balanced, although she also wants to ensure that its critics are controlled opposition.

Another thing the Global Leaders graduates have in common is that most of them have very scant resumes, (what does he mean? Fidelito was a substitute drama teacher!) apart from their participation in the program before being elevated to positions of power, which may indicate that it is their connection to Schwab’s institutions. which is the deciding factor in launching their career. This is most evident when the school’s alumni are publicly questioned about topics they have not been instructed to talk about beforehand, and their difficulties in formulating answers are often very apparent. Wolff claims that their role is simply to act as a mouthpiece for the topics of discussion that those in the shadows behind them want discussed in public debate.

Given the growing dissatisfaction with the anti-Covid measures that the school’s graduates, who are now national leaders, are putting into practice, Wolff believes it is possible that these people were selected because of their willingness to do whatever they are told, and that they are primed to fail so that the ensuing resistance can be exploited to justify the creation of a new global form of government. Wolff notes that politicians with distinct personalities and strong, original views have become rare, and national leaders of the past 30 years have distinguished themselves for being long-suffering and following a strict, top-down, globalist line. This has been particularly evident in the response of most countries to the “pandemic.” 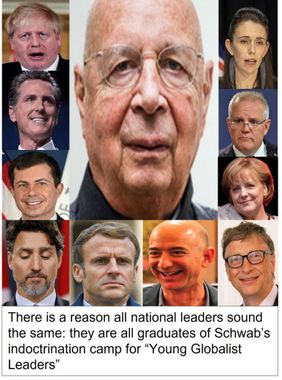 A GLOBAL NETWORK OF WEALTH AND INFLUENCE

Graduates of the Young Global Leaders School, and before that Global Leaders for Tomorrow, are in a very favorable position as they have access to the WEF’s network of contacts. WEF’s current Board of Trustees include luminaries such as Christine Lagarde, former director of the International Monetary Fund and current president of the European Central Bank; Queen Rania of Jordan, who has been ranked by Forbes as one of the 100 most powerful women in the world; and Larry Fink, CEO of BlackRock, the largest international investment management firm, which manages approximately $9 trillion annually. …

THE ALLIANCE OF BIG BUSINESS AND GOVERNMENT

The main purpose of WEF’s activities, Wolff believes, is to facilitate and promote high-level cooperation between large companies and national governments, something we are already seeing. Viviane Fischer, another participant in the Corona Commission podcast, points out that British company Serco processes migrants for the British government and also manages prisons around the world, among its many other activities. The international reach of the pharmaceutical industry is also significant: Wolff mentions, for example, that Bill Gates, a graduate of Global Leaders, had been doing business with Pfizer, one of the major manufacturers of the controversial mRNA anti-vaccine vaccines, long before the pandemic broke out, through the public health initiatives of his foundation in Africa.The Wall Street Journal has reported that his foundation had earned about $200 billion in “social benefits” from vaccine distribution before the pandemic even started. One can only imagine what his vaccine yields are today. 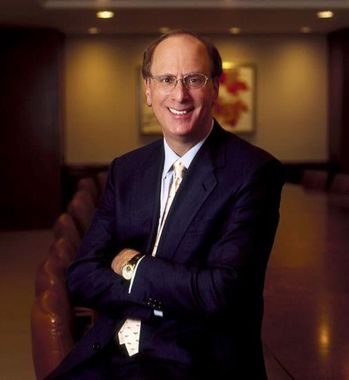 Digital technology, now ubiquitous, also plays a prominent role in the elite’s global designs. Wolff emphasizes that BlackRock, led by Global Leaders alumnus Larry Fink, is currently the largest advisor to the world’s central banks, collecting data on the global financial system for over 30 years, and undoubtedly has a better understanding of how the system works. than the central banks themselves.

One of the goals of current policies pursued by many governments, Wolff says, is to destroy the businesses of small and medium-sized entrepreneurs so that multinational corporations based in the United States and China can monopolize business everywhere. Amazon, in particular, led until recently by Global Leaders alumnus Jeff Bezos, has made huge profits as a result of the lockdown measures that have devastated the middle class.

DIGITAL CURRENCY
Wolff argues that the ultimate goal of this domination by major platforms is the introduction of digital banking currency. …

Wolff goes on to explain that the lockdowns and subsequent bailouts that have taken place around the world over the past two years have brought many countries to the brink of bankruptcy. To avoid economic catastrophe, the world’s governments resorted to taking out 650 billion special drawing rights, or SDRs, which are additional foreign exchange reserves managed by the International Monetary Fund. When these eventually fall due, those same governments will find themselves in dire straits, which may be why the adoption of digital currencies has suddenly become a priority – and this may have been the hidden purpose of the lockdowns all along.

Wolff says two European countries are already ready to adopt digital currencies: Sweden and Switzerland. Perhaps not coincidentally, Sweden has had virtually no lockdown restrictions as a result of the pandemic, and Switzerland has only taken very light measures. Wolff thinks the reason for this may be that these two countries didn’t have to crash their economies due to lockdown measures, as they were already prepared to use digital currencies before the pandemic started.

He contends that a new round of lockdowns may be being prepared that
will finish off the world’s economies for good, leading to massive
unemployment and in turn the introduction of Universal Basic Income and
the use of a digital currency managed by a central bank. This currency
might be restricted, both in terms of what individuals can spend it on
as well as in the time frame that one has to spend it in.
DEMOCRACY IS ABOLISHED

The ultimate conclusion we must draw from all this is that democracy as we knew it has been quietly abolished, and that while the semblance of democratic processes is being kept up in our countries, … an elite cadre of super-rich and powerful individuals actually control everything that happens in politics, as has become especially evident in relation to the response to the pandemic.

The best way to combat their plans, Wolff says, is simply to educate people about what’s going on and make them realize that the “super-dangerous virus” story is a lie designed to trick them & manipulate them into accepting things that are against their own interests. If even 10% of ordinary citizens become aware of this and decide to take action, it could thwart the plans of the elite and perhaps open a window for ordinary citizens to take back control of their own destiny.

Ernst Wolff is interviewed in this series of videos by Dr. Reiner Fuellmich, a German lawyer and politician who hosts a podcast called Corona Ausschuss (Corona Committee), which critically examines the German government’s response to the pandemic. These videos are from one of their podcasts. Also joining the group chat are Viviane Fischer, a Berlin-based lawyer and economist who regularly sits on the Corona commission, and Wolfgang Wodarg, a former German MP for the Social Democratic Party who has spoken out against the lockdown and vaccination measures of the German government.

For the videos see the link