Whenever US/Western officials are interviewed, mind-manipulating double-talk is consistently featured.

It’s in stark contrast to straight talk by officials from Russia and other nations free from US control.

In the 1990s, US-controlled “NATO’s military infrastructure started to get closer and closer to the borders of the Russian Federation.”

As a result, Russian “security (is) endangered.”

“NATO is…an organization that was tailored and was created for confrontation, not for defense.”

“NATO is a weapon of confrontation.”

“(T)his weapon (is) get(ting) closer and closer to our borders.”

“(W)e have seen the gradual invasion of NATO into Ukrainian territory with its infrastructure, its instructors, (heavy and other) weapons, teaching (and directing) Ukraine(’s) military” for preemptive war-making as a US proxy force.

“(T)hat brought us to the (the current) red line.”

“Let’s find a way out. Let’s produce some guarantees for us.”

“Let’s think about returning NATO’s military infrastructure back to the borders of 1997.”

Let’s get freed of the idea of Ukrainian membership (in) NATO, and also…abandon the idea of deployment of any offensive weapons on the territory of Ukraine next to our borders.”

Russia will no longer “keep silent (about) this (unacceptable) danger.”

Throughout his time as Russia’s president, Putin has always been willing to negotiate with other countries and “take into account (their) concerns.”

At the same time, no responsible leaders would sacrifice their country’s security in dealings with others.

When Russian peacekeepers are deployed abroad, they’re in response to requests for help by other governments.

“Russia will never discuss with anyone withdrawal of missiles or other weapons from its own territory.”

“There are no Russian troops in Ukraine.”

“There are no Russian troops in Donbass.”

“There are Russian troops on Russian soil” threatening no one.

They’re deployed to defend the nation from threats posed by US-dominated NATO.

It’s prepared to respond to aggressors.

It wants its sovereignty, territorial integrity and security concerns respected.

If the Biden regime crosses the line to illegally sanctioning Vladimir Putin, other senior Russian officials, and more gravely harming the nation’s interests than already, it “can lead to (a) discontinuation of any relationship between our two countries,” said Peskov.

Its Article II requires all member states to “settle…disputes” according to the rule of law.

When imposed by hegemon USA, sanctions are weapons of war by other means.

Yet they fail to achieve intended objectives.

US sanctions war and other hostile actions against Cuba for over 60 years, Iran since its liberating 1979 revolution, Venezuela for more than 20 years, and against countless other nations achieved no strategic aims.

Yet hegemon USA imposed them against dozens of countries.

It’s one of many examples of how the scourge of imperial lawlessness operates.

Over the longterm, they’re self-defeating. The same goes for other hostile US actions.

Despite its global empire of military bases, its super and other weapons, its endless hot and cold wars on invented enemies, hegemon USA grows weaker on the world stage.

It’s incrementally going the same way as history’s other empires.

In decline because of its imperial arrogance and unwillingness to change, it’s just a matter of time before its supremacy on the world stage ends.

Looking ahead on Russian/US relations over the near-term, Peskov stressed the following:

If dominant US hardliners show “political will” to shift from confrontation to cooperation with Moscow, then “common ground” can be found.

If the unacceptable status quo continues unchanged — what’s highly likely — it’ll be the other way around. 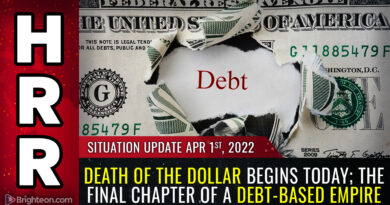 Death of the dollar begins TODAY; the final chapter of a debt-based empire