he has a medical condition

that prevents him from wearing a mask.

by Jeff B
(henrymakow.com)

Mask wearing in “indoor public spaces” became mandatory in Manitoba in October of 2020.

I was forced to change my work situation in order to avoid wearing a mask all day.  At least this part of my life remained under my own terms.

Nor have I worn a mask to go shopping. In a Costco, in April of 2021, I was confronted by a couple of enforcement officers, I realized how easy it was to deflect these
agents of the province.

They were quickly dismissed by my claim of a medical condition that prevented me from wearing a mask.  They did not ask me about my medical condition because they have been trained and know that they cannot.  (If they did ask, my condition is called ‘acute lucidity’). 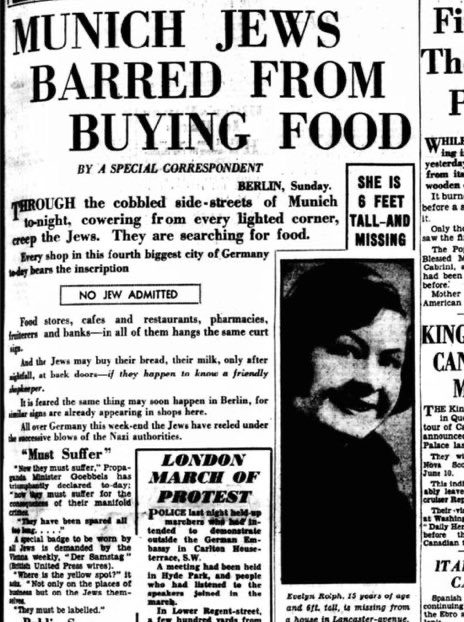 (Were it so easy for German Jews)

Covid
enforcement officers and the police both know they can do nothing once
you inform them that you are exempt from the rules.

In Manitoba, my personal medical information is protected by the Personal Health Information Act (PHIA).  The
rules will vary depending on where you live, but chances are your right
to privacy prevents these officials from asking for proof of anything.

I
had already ventured without a face cover of any kind in a few smaller
businesses, but it was not until my confrontation in a Costco that I
realized it was possible to do this everywhere.

Next it was on to Superstore.

My
first maskless visit to this retail behemoth inspired some anxiety,
remembering video footage of elderly people being harassed and then
arrested by police for what I was about to do.

I even brought my plastic face shield with me in case I decided to pull the pin on the whole idea.  Nobody said anything.

This is last May!

From then on, I went absolutely everywhere without a mask and have rarely encountered any resistance.

It
seems like the large stores have learned their lesson and give the
least amount of pressure to patrons who are not wearing masks.  I
imagine this is due to their willingness to comply with the laws, which
really state that the only requirement of a business is to remind
shoppers that there is a mask mandate in effect, but they no longer try
to enforce these rules.  Enforcement was never part of the mandate.  The stores and the citizens took it upon themselves to push each other around, which I believe was expected by our overlords.

In any case, it’s as simple as walking in without a mask.  Most stores no longer have someone manning the front door making certain customers are mask-compliant and hand-sanitizing.  If someone does say something, asks me about my mask, I respond with, ” I cannot wear a mask.”

In most cases, that is the end of the conversation.

Sometimes the response is a confused look, as if these words somehow do not compute, but nothing more.  On occasion, a follow up question of, “why can’t you wear a mask?” is asked.

On a rare occasion, the clerk might push further with,  “how or why are you exempt?”  To
this, an appropriate response might be, “none of your business,”
although I usually say something like, “I have a medical condition.”

I
cannot say that all of my experiences have been without incident, but
the vast majority have been smooth and easy and certainly everyone
should be doing it.

I feel like the best strategy is a smile.

Being inside a store in this covid era is a definite cause to be happy.  The angry, defensive or even aggressive approach of asserting yourself in this matter is counter productive.  Stating
that these laws are unconstitutional, while true, opens up a discussion
that will not suit your purpose if you just want to shop.

Being
positive and upbeat while defying these laws puts a smile on my face,
and although everyone else is still masked, I can tell very often that
they are smiling back.

In most every case, other customers and staff treat you normally, like you were any other shopper.

On
a side note, I have developed a friendship by simply striking up a
conversation with a brave maskless patron who helped inspire me to do
the same.

We now have this brief opportunity, while these
rules are still in place of being able to easily identify those
like-minded individuals around us.

It’s not surprising that the vast majority of people are still complying.

Last
fall when Manitoba scrapped the mask mandate for about 3 weeks, due to
supposed falling cases, you could hardly tell the difference; masks
everywhere.  Masks outside, and exercising and driving
alone. So many of them still believe the official narrative and
willingly wear the mask because they believe it has some benefit.  If nothing else it shows they are on board with team covid.

Depending
on where you live, the rules may be different, and you may encounter
more difficulty than I in asserting your freedom, but no matter what
it is worth the risk.

It feels like all of this mask stuff is about to go away anyway, with the UK dropping all restrictions recently.  Not that things are going to turn around.  This is all part of the plan.  Restrictions will be loosened before the next round of tightening.

But why would we wait for the government to tell us it’s ok to dispense with the mask-wearing when it is already ok?