British broadcaster ITV was issued a warning by regulator Ofcom after a guest and a presenter on a TV show falsely claimed that 90 per cent of COVID hospital patients were unvaccinated.

The spurious remarks were made by Dr. Hilary Jones and Lorraine Kelly during a segment on the Lorraine show last month.

“Those people who haven’t been vaccinated, we’d really love you to think again and be vaccinated because 90 per cent of people in hospital are unvaccinated right now with Covid,” said Dr. Jones.

“That’s a figure that we have to really concentrate on, 90 per cent of people in hospital have not been vaccinated,” Kelly repeated.

However, both the doctor and the host of the show were sharing medical misinformation. The actual figure at the time was around 36 per cent.

After Ofcom received nearly 4,000 complaints from viewers about the broadcast, the TV regulator issued a statement.

“This programme incorrectly referenced the proportion of unvaccinated COVID-19 patients in hospital,” it said.

“We have told ITV that greater care should be taken by trusted medical experts when presenting facts and figures on public health issues.”

However, despite the erroneous claim, Ofcom said it wouldn’t be launching a formal investigation because “vaccination against COVID-19 offers greater protection against serious health consequences” and as a result, “we do not consider that the error was sufficient to materially mislead viewers on this main point of discussion.”

As the Glasgow Times reports, “A clarification was broadcast on the show two days later, explaining the statistic related to patients in intensive care units rather than the proportion of unvaccinated COVID-19 patients in hospital.”

However, as Toby Young points out, this isn’t true either.

“In fact, it’s also not true that 90% of Covid patients in ICUs are unvaccinated, as we’ve pointed out many times before on this website. So even the “clarification” was misleading,” writes Young.

Dr. Hilary Jones has been a vehement lockdown advocate from the very start of the pandemic and has significantly heightened his profile (and fattened his bank balance) as a result of regular ITV appearances over the course of the last two years.

However, in the early months of outbreak, Jones infamously acknowledged that face masks were largely useless in stopping the spread of the virus, before ‘getting the memo’ and doing a complete 180. 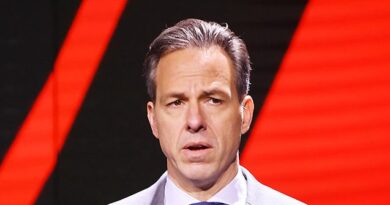 CNN’s Tapper on 1/6 Hearing: ‘Absolutely Devastating’– ‘Footprints Traced All the Way Back to Donald Trump’