The Canadian Government has announced that they will set aside CAD$40 billion (AUD$43.8 billion) to compensate Indigenous children in residential schools for “historic injustices”.

The decision affects around 55,000 children and is set to be paid after a lawsuit is settled.

The Canadian government separated around 150,000 Indigenous children from their families and sent them to residential schools from 1831 to 1998.

The children reportedly faced physical and sexual abuse at the schools, where around 6,000 students died, but officials say this number could be higher.

The compensation pledge stems from ongoing negotiations between Canadian authorities and First Nations groups, on how to start making amends for the mistreatment of Indigenous children.

“We have been unequivocal throughout these historic negotiations.

“And we will lay the foundation for an equitable and better future for First Nations children, their families and communities,” she said in a statement.

The money will reportedly be used to settle a Canadian Human Rights Tribunal order and two class action lawsuits as well as improvements to the Indigenous child welfare system.

A recommendation from the First Nations community was for Pope Francis to visit Canada in hope of an apology for the role the Catholic Churches played in the mistreatment.

The trip was initially scheduled for 2020 but was postponed due to the pandemic and then re-scheduled for this month, which has also been postponed.

In October the Vatican press office said the Pope is willing to travel to Canada as part of “the long-standing pastoral process of reconciliation with Indigenous peoples”.

While no date for the trip has been announced, it has been said he is aiming to arrive in Spring 2022.#

Canadian Prime Minister Justin Trudeau and his wife Sophie are well known Marxists who have taken Canada down a dangerous track of vaxxine tyranny in lockstep with most other countries particularly Australia.

Both are alleged to ingest Adrenochrome which makes them suspect in the child trafficking industry.

Backing the indigenous tribes has long been a tool of communist Deep State to divide and conquer countries as in Australia. Making extravagant reparations for ‘historic injustices’ to indigenous Canadians will open the door for the Australian Aboriginal industry which already costs the economy more than $38 billion a year. For what one might ask?

If any treaty is ever signed between the Australian Government and Aborigines then every Australian household will pay rent to the murris for evermore. Will landowners then understand why communist state governments in Australia have removed all freehold land titles?

The Vatican is involved and Pope will arrive in Canada later in the year. That should ring alarm bells everywhere.

Truckers from both countries have demanded vaxxine mandates stop. Supermarkets have run out of most food and fuel supplies are almost dry.

We will keep a close eye on what happens to the truckers and if the people support them. If they don’t it appears there will be a lot of starving people. Editor 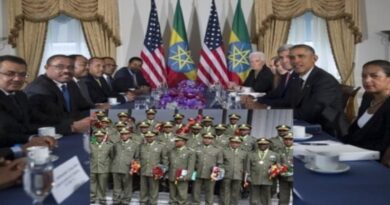 A Hidden Document Shows Obama Met Dr. Tedros and Terrorist Leaders of Ethiopia in 2014 – Then In 2017 Tedros Elected Head of WHO