Dozens of internally displaced people in Yemen's Marib governorate organised a sit-in yesterday to denounce the "brutal and continuous crimes committed by the Houthi militia" against them and demanding an end to the group's violations, Anadolu reported. The displaced Yemenis from the Sweida camp demanded the Houthis stop attacking them with missiles and booby-trapped planes, calling on the group to be prosecuted in local and international courts for committing war crimes in Marib, Taiz and other governorates. The protesters appealed to the United Nations, the Office of the High Commissioner for Human Rights and the international community to assume their humanitarian, legal and moral responsibilities towards the displaced and civilians of the Marib Governorate and to stop the killing, abuse and displacement […]

Rabo: Powell Is More Concerned With Repairing Past Mistakes Than The Consequences Of His Current Actions 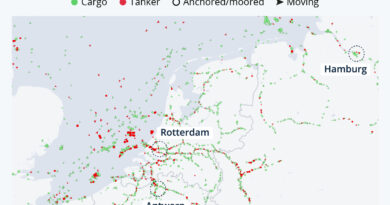 Forget China, There’s Now A Ship-Jam In The North Sea