On Friday, Feb 4, a weak Coronal Mass Ejection (CME) hit Earth. The event was supposed to pass by uneventfully — it would perhaps spark a few auroras, but nothing more. So how did a G1 geomagnetic storm ensue? How did the KP hit level 5? And how did 40+ Starlink satellites come crashing back down to Earth?

SpaceX confirmed the event yesterday: “On Thursday, Feb 3 at 1:13 p.m. EST, Falcon 9 launched 49 Starlink satellites to low Earth orbit from Launch Complex 39A (LC-39A) at Kennedy Space Center in Florida. … Unfortunately, the satellites deployed on Thursday were significantly impacted by a geomagnetic storm on Friday, [Feb 4].”

Two days before launch, a CME hit Earth’s magnetic field. It was not a major space weather event. In fact, the weak impact did not at first spark any remarkable geomagnetic activity. However, as Earth passed through the CME’s wake, some sputtering G1-class geomagnetic storms did develop, and it was one of these minor perturbations that hit the Starlink satellites on Feb 4.

Geomagnetic storms heat Earth’s upper atmosphere. Diaphanous tendrils of warming air literally reached up and grabbed the Starlink satellites. According to SpaceX, onboard GPS devices detected atmospheric drag increasing “up to 50 percent higher than during previous launches,” which is absolutely staggering — the heating was so extreme it was beyond the heating in modern solar models for storms 10-100 times bigger.

The company’s statement continued: “The Starlink team commanded the satellites into a safe-mode where they would fly edge-on (like a sheet of paper) to minimize drag. Preliminary analysis show the increased drag at the low altitudes prevented the satellites from leaving safe-mode to begin orbit raising maneuvers, and up to 40 of the satellites will reenter or already have reentered the Earth’s atmosphere.”

The Sociedad de Astronomia del Caribe apparently caught one of the reentries over Puerto Rico on Feb 7:

SpaceX says that the deorbiting satellites “pose zero collision risk with other satellites and by design demise upon atmospheric reentry—meaning no orbital debris is created and no satellite parts hit the ground.”

But how did such a minor solar event catch the experienced SpaceX team off guard?

The company launched 49 Starlink satellites into lower orbit for their usual validation phase. At first everything went as planned. However, it wasn’t before an ongoing geomagnetic storm –caused by 1) interaction with the Sun’s current sheet, and 2) a plasma stream riding the solar wind– began causing major problems. The storm succeeded in downing at least 40 of the 49 craft, most of which have now burnt up in the upper atmosphere.

At 210km (130 miles) up, the satellites were in the highest dangerzone for solar storms — they are at the key energy coupling point for a geomagnetic activity. However, this storm, by all measurements and standards, was extremely weak — it was a run of the mill space weather event, which explains why the SpaceX team decided to launch despite the forecasts. The company have shot many satellites into orbit during similarly sized geomagnetic storms, on ten previous occasions, in fact, all without issue.

No, a G1-storm / KP5 reading isn’t at all concerning in of itself, not in the slightest — they occur regularly, approx. 100-200 times a decade. The cause for concern here, and what they won’t tell you, is that this is a huge FAILURE for Earth’s magnetic field. In other words, it is evidence of our planet’s ever-waning magnetosphere, which is weaker than we’ve all realized and getting weaker all the time due to forcings and mechanisms that we simply don’t have a good grip of thanks, at least in part, to a chronic under-funding of the field in favor of the more lucrative rewards offered by fairy-tales such as ‘anthropogenic global warming’.

But to say we don’t know anything would inaccurate. We do have a limited, though tried-and-tested, understanding of the factors involved, which include two key players: 1) low solar activity, and 2) our planet’s migrating magnetic poles.

Basically, as Earth loses its dipole magnetic shape, due to the shifting of its poles, the overall field strength is weakening. Earth is effectively losing its protective shield against energy from space, meaning every enhancement of the solar wind, every crossing of the Sun’s current sheet, and every CME is having a larger and larger impact than it ordinarily would, both directly on the upper atmosphere, and also indirectly through the ionosphere’s equator-traveling waves that come from the aurora.

In the year 2000, we knew the field had lost 10 percent of its strength since the 1800s. Another 5 percent was lost by 2010. Further accelerations occurred in recent years, 2015 and 2017, but we laymen were not privy to any additional loss data–with guesses on why that might be quickly sending you down a conspiracy rabbit hole.

Given the last solid data point we have, that of 2010, our magnetic field should have handled this recent impact far better. Those Starlink satellites should not have been taken out — I can picture SpaceX team still scratching their heads. And while this is a small blow for a man (Musk), it poses a much bigger blow for mankind: What happens when the ‘big one’ hits? One on the heels of a large coronal hole stream, for example? What happens when that monstrous X-class solar flare is fired directly at us?

Bottom line, the Sun is capable of muchm much more, particularly at this junction of the solar cycle. The ‘ramp-up’ of SC25 isn’t expected to reach its Max until 2024-2025, meaning we could have 4 years left of ever-increasing threat. And worse than downing a few satellites, a powerful X-flare (an X9+) would pose problems to the electrical infrastructure across the planet.

Prepare for a grid-down scenario.

One could be coming.

Bison have been spending their winters in the farmlands near Delta Junction for decades. But this year’s deep, icy snow pack has forced the animals to forage at farms and travel on roadways, reports ktoo.org.

The below video shows what can happen when driver meets bison on a roadway — with no other way to get around the vehicle, except through deep snow off the sides of the road, the bison charged and trampled over the top of a car:

The car was seriously damaged, but the driver reportedly was OK.

“They’re having a tough time right now, getting through that ice crust and getting to their normal forage,” said Clint Cooper, who works for the local Fish and Game Department.

Cooper said that the December storms that dumped snow have made it very hard for the animals to move around and forage, adding that “the bison are sticking to the road more, more so than normal, that’s for sure. They’re doing whatever they can to stay out of that snow with that crust on the top. There’s been quite a few folks that’ve expressed some concern about the bison being on the roads,” he said. “And I’ve talked to a few people who’ve had some damage to their vehicle.”

…With A Feels-Like Of -91F Logged In Howard Pass

A weak and wavy meridional jet stream flow has effectively locked North America’s COLD up north this week –particularly the Easts’– where it is proving brutal and record-challenging.

Bettles, located in north-central Alaska, logged a low of -51F recently, well below the locale’s average of -15F. Daytime highs in Bettles have also struggled, peaking at barely -25F last weekend. And the situation has been similar across much of Alaska:

Prudhoe Bay, for example, on the state’s NE coast, saw an overnight low of -47F and a daytime high of just -27F; Nuiqsut recently hit a low of -53F; while the remote northern town of Deadhorse reached -50F, with winds making it feel as low as -88F (among the coldest ‘feels-like’ temperatures ever logged there); however, most impressive was Howard Pass, home to some of the state’s most extreme weather, which reported a wind chill of 91 below zero — a reading only a few degrees away from the town’s unofficial all-time record of -100F, set in 2014.

“The intense cold is confined to the northern part of the state across the Brooks Range and the North Slope,” said AccuWeather senior meteorologist Dan Pydynowski. But farther south has still be anomalously frigid, with Monday’s temps in the Fairbanks area struggling to climb above zero degrees — well-below the norm of 8F for the time of year.

“The jet stream is running through the middle of the state, with the polar vortex and Arctic air trapped over northern Alaska producing dangerous low temperatures,” said AccuWeather meteorologist Thomas Geiger.

According to NOAA –who use ground-based temperature stations proven to be skewed by the urban heat island effect– the contiguous U.S. kicked off 2022 with its coldest January since 2014. The month was also the driest Jan in eight years.

The average January temperature across the contiguous U.S. was 31F, which ranks it in the middle-third of January months in the 128 year record.

Other notable climatic anomalies in Jan, 2022 for North America:

“Bomb cyclone” batters Northeast: A nor’easter rapidly intensified off the East Coast from January 28-30. The storm dumped record volumes of snow and brought blizzard conditions along the coastline from Delaware to Maine. On Jan 29, Boston, Massachusetts, tied its greatest one-day snowfall record — 23.6 inches, although benchmarks from the late 1800s were toppled elsewhere.

Several other significant snow events occurred throughout the month, including the Jan 4 blast that brought a blanket of snow from Arkansas to Delaware and stranded motorists for 24+ hours on I-95 in Virginia. A snow event on Jan 16-17 also delivered significant snowfall from the southern Appalachians to Maine with portions of New York state reporting a record 18-24 inches of powder.

Florida Was impacted by a descend polar plunge, bringing the state its coldest temperatures for a decade+.

Bering Sea Ice Extent was its highest since 2013 (and growing), with Arctic Sea Ice reaching its highest extent since 2004.

Climate is cyclic, never linear; and the COLD TIMES appear to be returning, the mid-latitudes are REFREEZING, in line with historically low solar activity, cloud-nucleating Cosmic Rays, and a meridional jet stream flow (among many other forcings, including the impending release of the Beaufort Gyre). 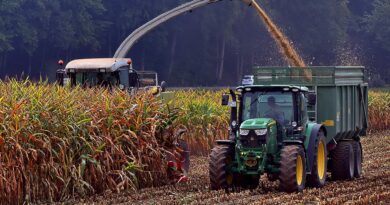 New Study: 23 Experts in the fields of Solar Physics and Climate Science Contradict the IPCC — the Science is NOT Settled