BUENOS AIRES – Argentina’s Defense Minister Jorge Tayana and his Venezuelan counterpart, Minister of People’s Power for Defense Vladimir Padrino López, have agreed to cooperate in pursuing their investigation of Puma, a series of military exercises conducted in Argentina in 2019 with the aim of invading Venezuela and overthrowing the government. The military drills – which were overseen by Argentina’s former rapid deployment force army commander and current head of the army, General Juan Martín Paleo – were undertaken between April and July 2019, during the presidency of Mauricio Macri.

“As an active member of the Lima Group, Macri’s government demonstrated an interventionist attitude in relation to Venezuela,” said Tayana.

With the overall goal of overthrowing the Bolivarian Revolution, the objective of the military drills was to train a swift action battalion ready and available to the U.S. military’s Southern Command. Seven military exercises were conducted at the Campo de Mayo garrison and by videoconference. Participants included Córdoba’s Parachute Brigade, the Tenth Mechanized Infantry Brigade of La Pampa, and commandos from Argentina’s Special Operations Force, also located in Córdoba. After the initial incursion into Venezuelan territory, a multinational task force would follow to provide military support and consolidate the occupation.

The Communist Party of Argentina has called for Paleo’s removal.

Revealed by Argentinean journalist Horacio Verbitsky, operation Puma also uncovered maps of Venezuela with military installations and positions. Not so unassuming codewords and acronyms were used to describe different countries in the region. “South America is called South Patagonia. Venezuela is referred to as Volcano and its officials in conflict are NM and JG, otherwise, Nicolás Maduro and Juan Guaidó,” said Verbitsky. The map also showed Colombia referred to as “Ceres”; the two Guyanas and Suriname are “Tellus”; Brazil is “Febo”; Peru and Ecuador are “Fauno”; Chile is “Juno”; Uruguay is “Baco”; and Paraguay and Bolivia are nonexistent.

It also has been noted that the first Puma military exercises were conducted in April 2019, just 15 days prior to Operation Liberty, a failed attempt to seize a military base east of Caracas. The operation was coordinated by the disgraced former president of Venezuela’s National Assembly and self-proclaimed president, Juan Guaidó, and opposition figurehead Leopoldo López. Macri was a regional head of state who recognized Guaidó as president of Venezuela. He also was a signer to the Organization of American States’ (OAE) Inter-American Treaty of Reciprocal Assistance. During heightened tensions against the Venezuelan government, this treaty made it permissible to activate the armed forces of regional countries if any member state suffered an attack.

Venezuela’s National Assembly has approved an agreement, signed by the government and opposition, on three principal aspects regarding the protection of its national territory: (1) Coordinate and reject any pretense of military intervention; (2) Incentivize investigations to determine responsibility and impose sanctions on those who attempt to undermine or weaken the national territory; (3) Strengthen internal laws related to security and defense of the national territory.

Argentina’s current president, Alberto Fernández, withdrew from the Lima Group in March 2021. “The Republic of Argentina has formalized its withdrawal from the so-called Lima Group, considering the actions promoted by the group internationally, to isolate Venezuela and its representatives, have achieved nothing,” noted Argentina’s Ministry of Foreign Affairs. The official press release also stated that the Lima Group was composed of “Venezuelan opposition members,” as if they were equal parties to the group. Their presence has “led to the adoption of positions that our government can’t undertake and will not support.” 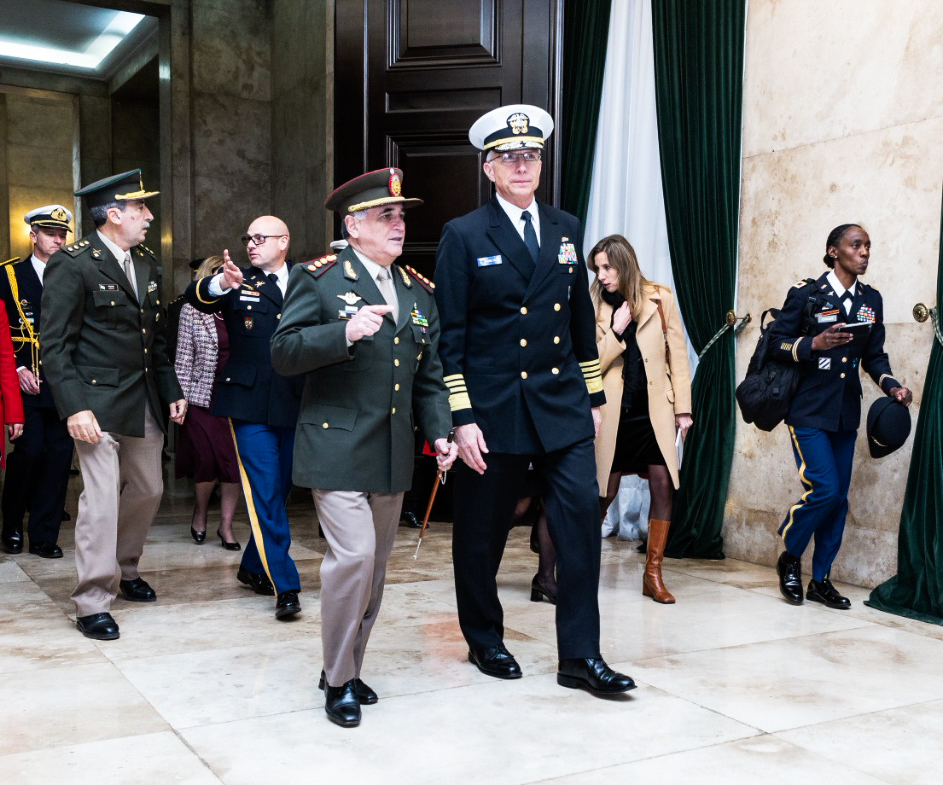 Craig Faller (right), head of the US Southern Command, meets with Argentine defense officials in Buenos Aires in 2019. Photo | SouthCom

Established by 13 countries – including Brazil, Canada, Colombia, Mexico, and Peru – with support from the United States, the Lima Group’s stated purpose is to “denounce the rupture of the democratic order in Venezuela.” Despite not officially being a participating member, the U.S. government attended several Lima Group conferences via videoconference.

“In May 2019, as Paleo commanded the second and third sessions of the Argentine Armed Forces exercise to invade Venezuela,” said Verbitsky, “[t]he (U.S.) Southern Command published” a white paper entitled “Enduring Promise for the Americas.” The publication of the document coincided not only with Operation Puma military drills but also an official visit by the Commander of the U.S. Southern Command, Craig Faller, to Argentina in June 2019. During his stay, the career military official convened with Venezuela’s former Minister of Defense Oscar Aguad to discuss issues involving cyber-defense, narco-trafficking, and organized crime.

Julian Cola is a translator (Brazilian-Portuguese to English). A former staff writer at the pan-Latin American news outlet, teleSUR, his articles and essays also appear in Africa is a Country, Black Agenda Report, Truthout, Counterpunch and elsewhere.