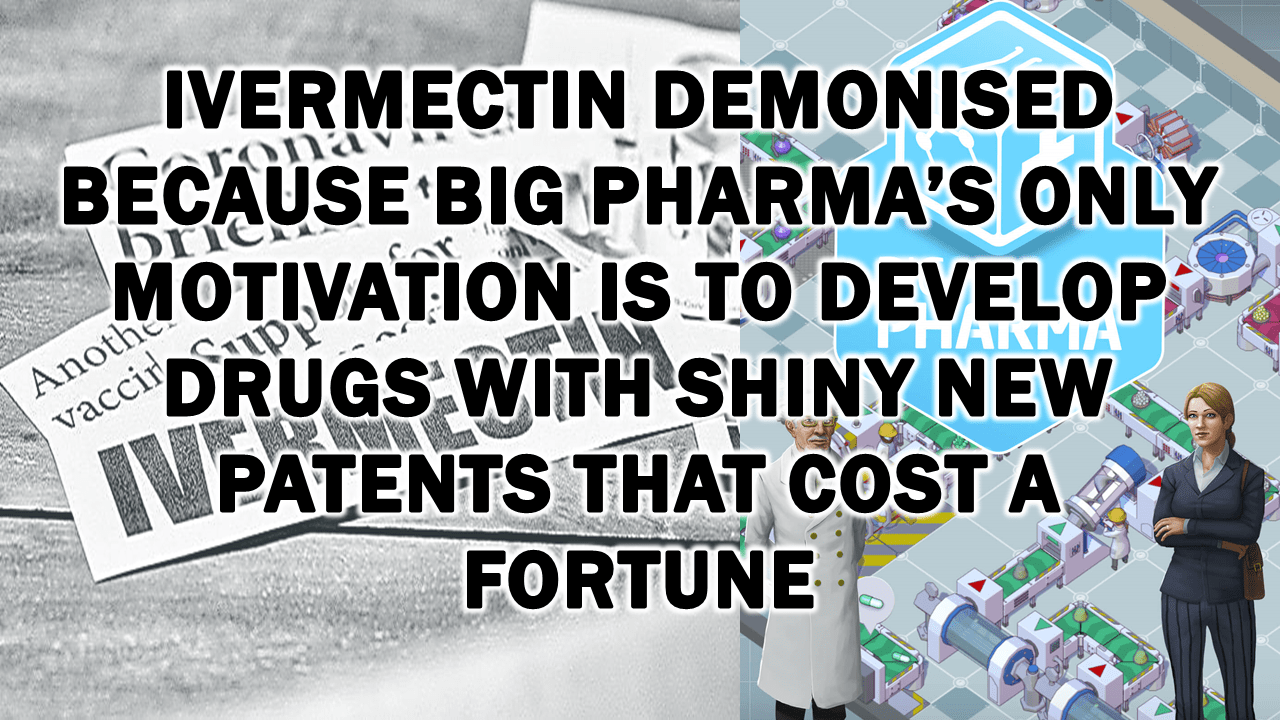 Before getting into the Covid discussion, it’s important to note the many amazing qualities of this inexpensive, safe medication – ivermectin – that’s on the World Health Organisation’s List of Essential Medicines, Dr. Steven Phillips wrote.

Ivermectin has saved countless lives globally in its use as an anti-parasitic, Dr. Phillips noted, and for that it won its discoverers the Nobel Prize in Medicine in 2015. But in addition to that, its other diverse therapeutic effects, including broad antiviral activity, have helped solidify its reputation as a “wonder drug.”  Many may not know that, ivermectin:

To top it off, “ivermectin has continually proved to be astonishingly safe for human use.”

There are currently 79 studies evaluating ivermectin for Covid from 766 scientists, which include over 85,000 patients from 27 countries. And they overwhelmingly demonstrate that ivermectin is helpful against Covid.

And yet, somehow, NIH doesn’t recommend ivermectin for Covid. Why?

Because why look for the causes of, and cures for, chronic illnesses when you can suppress symptoms for a patient’s lifetime – keep patients coming back can be way more profitable.

Given this powerful financial motivation, if Big Pharma does find an effective medication that’s intended for short-term use, it’s reasonable to conclude that they’re only motivated to develop the drugs with shiny new patents that cost a fortune. But what happens if a cheap, safe, effective repurposed drug is found to have similar beneficial effects? It is ignored. Worse yet, is it demonised.

The demonisation of ivermectin is not only a lethal psychological disease of US corporate media and public health bodies.  It has infected the simliar corporate dominated institutions in the UK.

A search on the BBC website for “ivermectin” returns the latest headlines:

And the Guardian has equally manipulative headlines to stop the use of the life-saving drug:

These headlines, so obviously false and intended to misdirect the public, should be enough for even the most devout fans of these outlets to mistrust corporate media entirely, surely?

But it is not only corporate media that are responsible for unnecessary harm and death, the UK government and public health bodies are equally guilty.

On 5 February 2021 a petition to hasten the regulatory approval of ivermectin – as it had been shown in a WHO study to reduce mortality in Covid patients by 83% – was rejected by the UK government, citing it was a concern for the MHRA.  Effectively passing the buck and disregarding any duty of care they have to the public.

In response to a Freedom of Information Act request, the Medicines & Healthcare products Regulatory Agency (“MHRA”) stated: “ivermectin is currently not approved in the UK for the prophylaxis or treatment of Covid-19.”  This was in June 2021 but appears to be the last word the MHRA has said regarding ivermectin as a treatment.

To make a comparison, Oxford University began trails for their Covid “vaccine” on 20 January 2020 and was given UK emergency use authorisation on 30 December, 11 months later.

It took less than a year for the MHRA to “approve” a novel gene therapy drug with known catastrophic effects, however, over two years later the MHRA is still awaiting trials to be completed on a known to be safe and effective treatment, ivermectin.

On 22 December 2021, the UK government signed two new contracts to buy a further 4.25 million courses of antivirals for the NHS. Not a single one of those courses is ivermectin. Instead, they purchased “2.5 million additional courses” of HIV/AIDS treatment, ritonavir, from Pfizer and “1.75 million additional courses” of a drug that increases the number of mutations in viral RNA, molnupiravir, from Merck.

To make matters worse, ritonavir, which judging by the order sizes the UK government has placed, is to be the widely used treatment and has known side-effects:

(Related: Pfizer says using its Covid Pill with HIV Drug cuts the risk of Death by up to 89%; is this an admission that the Covid Vaccines cause Acquired Immunodeficiency Syndrome?)

If none of this makes sense then you may have fallen for the charade that this is about the public’s health. It is not about health.  It’s about making money.  It proves Dr. Phillips’ point that “if Big Pharma does find an effective medication that’s intended for short-term use, it’s reasonable to conclude that they’re only motivated to develop the drugs with shiny new patents that cost a fortune.”

Fact-checkers, Centers for Disease Control (CDC), and even Pfizer themselves have made …

March 3, 2022Ilana Rachel Daniel: Israel, The Canary in the Coal Mine

March 3, 2022Is your country being led by a Psychopath?

The world is now being controlled by a bunch of conspirators – …

March 3, 2022Australia’s record breaking wave of Covid-19 sees Fully Vaccinated account for 9 in every 10 ICU Admissions & 4 in every 5 Deaths

Australia has just experienced its largest wave of Covid-19 cases, hospitalisations and …

March 2, 2022Vaccines that spread themselves, a Covid “Solution”

March 2, 2022Slipping Under the Radar: Pfizer Documents, Pandemic Treaty and the Magical Disappearance of Covid

March 2, 2022Covid and Putin are not a threat to your freedom; people like Schwab, Gates & Trudeau are

House Passes Bill To Rescind Over $70 Billion In IRS Funding

EU & NATO Appear To Be Forming A Bloc For War Against Russia: Lavrov