It is becoming increasingly more apparent with each passing day that the Russia-Ukraine conflict is the globalists’ new “problem” for which a global financial reset is the only “solution.”

We are now being told that in order to stop Vladimir Putin’s aggression against Ukraine, all cryptocurrency must be swept under the control of central governments.

Because decentralized cryptocurrency is a threat to the global central banking cartel, the globalists appear to have launched another false flag operation to create a reason for seizing control of the crypto-sphere.

At best, they are capitalizing on another foreign war to push the goals and agendas of the World Economic Forum (WEF), which wants all cash to go away and for everyone to be forced into a new digital paradigm.

Neil Parmenter, president and CEO of the Canadian Bankers Association, says the new system being ushered in as you are reading this will do away with all paper and coin money, credit cards and identification cards.

“Under the Great Reset, your entire financial portfolio will be controlled by the central bank and your assets relegated to a Central Bank Digital Currency (CBDC) that can be turned off in a split second by the tyrannical regime you dare to criticize,” warns Matt Agorist from Activist Post.

The Canadian government’s recent seizure of cryptocurrency wallets tied to the Freedom Convoy trucker protest was just a trial run for this new paradigm.

Justin Trudeau, invoking Canada’s Emergencies Act in order to do it, called on the state to cut off all payment transfers from identified wallets linked to the protests. This went on for a short time before Trudeau ultimately revoked the act.

Now, just a few weeks later, Putin has invaded Ukraine and the global mafia “elite” are calling for the entire world’s crypto wallets to be “regulated” in order to stop Putin from receiving monetary support.

“We just witnessed Canada seize the assets of its citizens for peaceful protest, and now they are pushing a new system in which the state and central banks literally control everything,” Agorist says. “And it’s spreading – to America.”

“It is essential that policymakers, including the Federal Reserve, plan for the future of the payment system and consider the full range of possible options to bring forward the potential benefits of new technologies, while safeguarding stability,” Brainard said in remarks he prepared for the U.S Monetary Policy Forum in New York.

“A U.S. CBDC may be one potential way to ensure that people around the world who use the dollar can continue to rely on the strength and safety of U.S. currency to transact and conduct business in the digital financial system.”

As Agorist explains, such rhetoric is deceptive in that the “competition” Brainerd is talking about actually means central banks “competing” with, i.e., taking control of, all decentralized cryptocurrencies, including Bitcoin.

“Bitcoin and other decentralized cryptocurrencies are a threat to the global banking cartel because they cannot control it,” Agorist writes. “The anonymity and independence fostered by cryptocurrencies on the blockchain are enemies to the ruling class who seek to maintain control through centralization.”

It turns out that the Russia-Ukraine situation is, in fact, being used by the military-industrial complex to try to justify this transition, which WEF Founder Klaus Schwab infamously said will result in people owning nothing and being happy.

“The Atlantic Council is the group that NATO uses to whitewash wars and foster hatred toward Russia, which in turn allows them to continue to justify themselves. It’s funded by arms manufacturers like Raytheon, Lockheed Martin, and Boeing,” Agoris says.

“It is also funded by billionaire oligarchs like Ukraine’s Victor Pinchuk and Saudi billionaire Bahaa Hariri.” 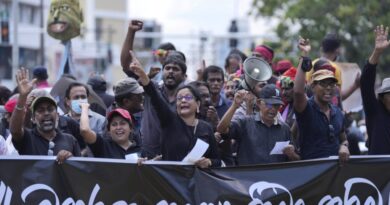