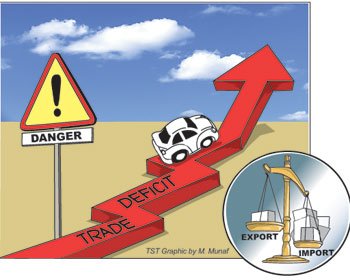 Another milestone (or more accurately millstone) was recently passed by the U.S. economy as the January trade deficit surged to an all-time record high of $107.6 billion, up some $26 billion from December’s $80.7 billion imbalance.*

Like the gigantic federal budget deficit, the trade imbalance is no longer talked about by the financial press.  There has been little criticism of President Biden on either matter nor are Administration officials questioned about how things can be reversed.  In fact, some commentators bizarrely contend that trade deficits show how robust an economy actually is!

The trade deficit was supposed to be alleviated by former President Trump who vowed throughout the 2016 campaign that he would rectify the situation and repeatedly ridiculed U.S. trade negotiators for their lack of financial acumen.  He touted that his “friendship” with world leaders, most notably Chinese President Xi Jinping, would result in favorable trade deals for the country.

Trade hawks got on board with Trump’s economic nationalism believing that he would not only fix imbalances, but create an American industrial renaissance.  Optimism ran high after his unexpected win in 2016.

As president, after a couple of contentious years of on-again, off-again negotiations a first phase of an agreement with China was signed in early 2018.  During the negotiations, he boasted:

When a country (USA) is losing many billions of dollars

on trade with virtually every country it does business with,

trade wars are good and easy to win.**

In actuality, nothing significant was agreed upon with China despite the Trump Administration bragging that it was the first phase of a more comprehensive deal to come.  Despite all of the hoopla, the trade imbalance continued to grow and no deal was ever finalized.

Besides the initial agreement with China, the next biggest trade policy act was the scrapping of NAFTA and its replacement with a new treaty, “The U.S.-Mexico-Canada Agreement” (USMCA).  The new agreement was little different than the original treaty.

Thus, by the time he left office in 2020, the U.S.’s trade gap ($68.2 billion) was greater than during his predecessor, Barrack Obama’s term, who Trump lambasted for his ruinous trade policy.***

Trump wisely spoke little about trade during his unsuccessful 2020 re-election bid and, surprisingly, his opponents, despite the president’s miserable failure, steered clear of the issue.  Of course, the Democrats were limited in what they could do with an obvious feeble, senile, and vile candidate at the top of their ticket.

Like the Democrats, Trump’s trade-hawk cheerleaders have remained reticent about the escalating trade numbers and like the former president they too, are now discredited when it comes to trade.  If America could not overcome its trade gap with an economic nationalist as president for four years, then there must be a problem with their thinking.

The reason why Trump failed – as will Biden – is that he, his negotiators, and the trade hawks who supported him are ignorant of basic economics. The burgeoning trade deficits are not the result of bad trade deals or that of ineffective tariff policies, but are the result of a deteriorating U.S. economy which is no longer one of production, but of consumption and debt.  A growing economy creates trade surpluses not deficits; it produces more than it consume.

Because of decades of anti-capitalistic economic legislation – confiscatory taxation, regulatory burdens, inflationary monetary policy, “crowding out” budget deficits, unemployment subsidies, minimum wage laws, and an overemphasis by the Establishment on higher education – the U.S. is no longer an industrial power and not a conducive environment for economic growth.

Because it possesses the world’s reserve currency, the U.S. has been able to offset its trade imbalances by importing goods in exchange for dollars.  Even with this advantage, however, trade deficits have continued to grow.  It appears that even its status as the possessor of the world’s reserve currency may be coming to an end as the dollar’s preeminence will fall with the surge in price inflation.  This will have a devastating effect not only for the domestic economy but its foreign trade as well as the country will not be able to export dollars for goods in the future.

The burgeoning trade deficit is a far more accurate indicator of the health of an economy than GDP, unemployment figures, or the government’s “official” rate of price inflation.  All these statistics are so manipulated that they do not come close to showing what is actually happening in the real world.  The trade deficit is a more reflective gauge of an economy’s productive capacity.

That Trump posted the largest trade deficit in history also explodes his claim that under his watch, the U.S. had the greatest economy ever!  How he calculated and supported such nonsense (which was not challenged by the financial press) is hard to maintain with trade deficits in the stratosphere.

When America’s economy was at its zenith, it was a creditor nation with trade surpluses and producing goods which were sold the world over.  It had a high savings rate, a low inflationary environment, little public debt, and respect for private property, particularly the right for entrepreneurs to hire and fire whom they pleased.  All socio-economic groups prospered from the free market and free trade, not just the 1%.

NETHERLANDS – 100 schools have insects and mealworms on the menu, indoctrinating your children to the New Normal.