To its shame, my alma mater is on the wrong side of history.

Denouncing US aggression in Southeast Asia during a 1969 address, he stressed that the business of America is “life, not death,” that US leadership is “insane.”

They’re guilty of grievous “war crimes” in Vietnam, he said.

Wald later focused on what he called “survival politics.”

He served as president of international tribunals on human rights issues in El Salvador, the Philippines, Afghanistan, Zaire, and Guatemala.

In 1984 during US-orchestrated and directed Contra wars against independent Nicaragua, he and three other Nobel laureates visited the country on a “peace ship.”

He feared that if militarized nuclear power didn’t end, it could end us.

“Rapid Response Panel: Ukraine Under Attack” at which he called Russia’s demilitarizing and deNazifying campaign “capricious and senseless,” adding:

“Now is the time for all voices to be raised (against) deplorable actions of Vladimir Putin (that) put at risk the lives of millions of people (sic) and undermine the concept of sovereignty (sic).”

Defying reality, he shamelessly ignored Russia’s intervention at the request of Donbass.

Invoking the right of self-defense under the UN Charter’s Article 51, Vladimir Putin authorized intervention to halt 8 years of  forever war by the US-installed coup d’etat regime in Kiev.

Calling the right of self-defense “wanton aggression,” Bacow further disgraced himself by ordering the Ukrainian flag to be raised over the Harvard Yard.

“Harvard University stands with the people of Ukraine (sic).”

Left unexplained was the scourge of US-installed fascist tyranny in Kiev.

Its internal state terror against Ukrainians with Russian roots, against all things Russia since illegitimately installed.

Its abolition of the rule of law and fundamental freedoms.

Its use of the country as a platform for US proxy war on Russia.

Its Nazification of central Europe.

Its menace to regional peace and stability.

Putin is “going to turn the dial up on the violence (sic).”

His tenure as Russia’s president has been “unbelievably brutal (sic).”

“Russia’s military campaign was premised on terrible delusions and assumptions (sic), so it was a big miscalculation both politically but also militarily (sic).”

Ignoring Putin’s overwhelming popularity at over 70% (compared to the fake Biden’s 37%), Kofman added:

“I don’t understand how that person is long term going to hold onto power after this.”

Putin restored Russia to a preeminent position on the world stage after the country’s lost 1990s decade under Western darling Boris Yeltsin.

Ukrainian President Viktor Yanukovych “was ousted after rejecting a trade deal with the European Union (sic).”

Russia “has been arresting, forcibly disappearing, and murdering activists in occupied Crimea since 2014 (sic).”

Do Harvard’s faculty teach rubbish like the above in classrooms?

Are students given failing grades on exams by sticking to truth and full disclosure on questions about Ukraine?

The book I edited and contributed to, titled “Flashpoint in Ukraine: How the US Drive for Hegemony Risks WW III” explains reality about the US-installed fascist regime and longstanding US war on Russia by other means.

Published in 2014, its content from distinguished contributors remains relevant to what’s going on today. 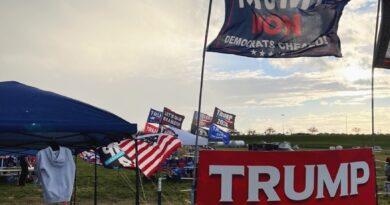 “The Election Was RIGGED and STOLEN and We’re Not Going to Let It Happen Again!” – President Trump in Pennsylvania