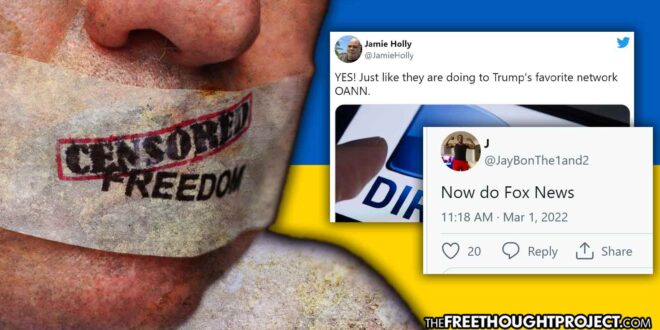 Apparently, in this new day and age, “defending freedom and democracy,” means you must eliminate freedom and democracy in regard to the sharing of information. In order to create and foster a freer and more peaceful world, we must silence anyone who questions our tactics and motives for obtaining that ostensible goal. Peace, we are now told, will come from McCarthyism in 2022.

In 1950, Senator Joseph McCarthy began a massive campaign to silence anyone who would dare question the establishment’s move involving the Soviet Union. These attacks on information would eventually become known as McCarthyism.

Using anti-communism as a means of stoking fear, the McCarthyist cult went after countless individuals who were silenced, lost their jobs, were put on blacklists, and even imprisoned. Years after the campaign began, people finally realized that they had been persecuting entirely innocent people — using extra-judicial procedures — whose only crime was questioning the status quo.

During the years of 1950 to 1954, McCarthy and his cohort within the House Un-American Activities Committee waged a destructive war on information and laid waste to the lives of innocent people, all the while enjoying the support of most Americans. The oblivious populace was so blinded by the “red scare,” they were willing to watch innocent people be silenced and hauled off to jail for a false promise of security.

Despite carrying out egregious acts of evil, most everyone involved in silencing and persecuting these “thought crimes” believed their actions were entirely noble. Though McCarthy faded into the background in 1955, later dying in 1958, every time a new threat presented itself to the American people, McCarthyism was revived — though it would never be referred to by that name again.

In just the last two decades, McCarthyism has reared its ugly head several times. After 9/11, thousands of innocent people were detained through administrative measures largely because of their ethnic identity. “Anti-terrorist” organizations began popping up on college campuses seeking to silence antiwar voices.

Lynne Cheney’s American Association of Trustees and Alumni, in its November 2001 report, Defending Civilization: How Our Universities are Failing America and
What Can be Done About It, listed 117 instances of “unpatriotic speech” by identified university professors and called American faculty “the weak link in America’s response” to September 11.

The examples of rampant McCarthyism after 9/11 are numerous too numerous to list but were not enough to stop people from engaging in it again.

McCarthyism would again rear its head in more recent years with the intellectually intolerant mob of woke cancelists. Anyone who dared stand up to the cancel culture in the mainstream was then forced out of their jobs and blacklisted — just ask New York Times editor Bari Weiss and New York Magazine journalist Andrew Sullivan.

While the woke McCarthyists are certainly troublesome, it is nothing compared to the wave of censors who began their rise to power during the early Trump years on the backs of the woke. Donald Trump ignited a fire under the new McCarthysists who would stop at nothing to silence any speech they deemed unfit for consumption — because Orange man bad. Couple this hatred for Trump with his alleged ties to Putin and we had a recipe for disaster.

No longer did the woke cults have to travel to campuses to shut down their political rivals — Big Tech took that over for them and effectively silenced anyone who’d dare commit one of the many new “thought crimes.”

In early 2018, Facebook and Google, tested the waters with this new era of McCarthyism. But instead of an entire group of people, they went after one man, Alex Jones. Jones was the perfect candidate as he’s long espoused conspiracy theories and in his latter years he went from standing up for the rights of Muslims, to pushing anti-Muslim rhetoric, giving his censors plenty of fodder.

Facebook, Apple, Spotify, and YouTube all permanently deleted the Infowars and Alex Jones Channels, Podcasts, and pages. Outside of their own domain, Infowars was entirely purged from the internet, with their last hold out being Alex Jones’ twitter profile.

“Yes, Infowars has frequent nonsense, but also a state power critique. Which publisher in the world with millions of subscribers is next to be wiped out for cultural transgression?” WikiLeaks tweeted at the time.

That tweet was met with hundreds of comments from folks praising the censorship and people subsequently attacking Julian Assange for standing against it. Infowars’ ban was not only supported by every mainstream outlet, but they demanded it go even further by removing Jones’ personal Twitter page, which happened shortly after. The masses were once again engaged in McCarthyism and once again, they didn’t even realize it.

Before and after Alex Jones was “unpersoned” by Big Tech, the Free Thought Project tried alerting everyone to the dangers of such a move. If they could take out Jones for his political rhetoric, they could take us all out — and several months later, they did.

October 11, 2018 is remembered in history as the day the tech giants attempted to wipe out independent, liberty-minded, antiwar media from the airwaves. In a coordinated effort, hundreds of pages devoted to peace and liberty were memory holed by social media giants.

The purge happened around 12:30 p.m. CST with mainstream news reports launching at the same time — implying that they were working in concert and given the heads up about the move.

In a statement co-authored by Facebook Head of Cybersecurity Nathaniel Gleicher — who also happens to be the former White House National Security Council Director of Cybersecurity Policy — the massive social media platform explained that it has removed “559 Pages and 251 accounts that have consistently broken our rules against spam and coordinated inauthentic behavior.”

Twitter followed shortly after by wiping out hundreds of accounts, including the Free Thought Project, on their platform as well.

Just like they did with Alex Jones, the unaware McCarthyists praised the move — until it came for them.

Once again, we find ourselves on the cusp of a massive wave of censorship and it has gone full circle — back to the “red scare” of 1950. The Russians are once again the enemy and anyone who doesn’t want to engage in nuclear war against them, a “Kremlin agent.”

After Russia invaded the Ukraine, the neo-McCarthyists came out of the woodwork and demanded anyone who spreads “misinformation” be unceremoniously silenced. but misinformation is entirely subjective.

Nevertheless, Facebook, Twitter, Google, Netflix and Tiktok have all blocked Russian News broadcasts and content, seemingly at the behest of the EU which announced it will ban the networks from broadcasting on television.

THE FUTURE OF CENSORSHIP

The Most Splendid Housing Bubbles in America, June Update: “Deceleration” and “Tipping Point” of the Raging Mania

How the Specter of Communism Is Ruling Our World – Part 8