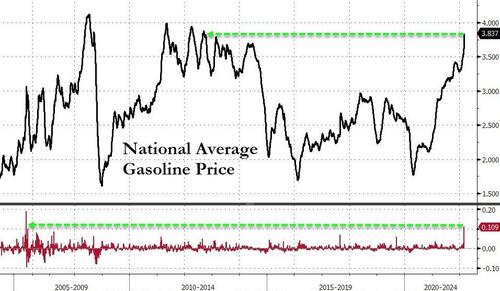 Gas prices at the pump were soaring long before Russia invaded Ukraine. The conflict has produced the prospect of a shortage of commodities, especially energy products, and sent Brent and WTI well over the $110 mark in recent days. Russia is one of the world’s largest crude oil suppliers. The spillover effects of the Biden administration sanctioning the country into oblivion have resulted in one of the most significant daily jumps of gasoline on record.

According to new AAA fuel data, the current national average gas price is $3.837, up almost 11 cents overnight, the second biggest move on record since the early days of the Iraq war in 2005. At this rate, gas prices could exceed the record in days, which is only 27 cents away.

On Thursday, for the first time ever, a U.S. city breached the $5/gal per gallon average – this is San Francisco, De Haan tweeted yesterday.

WTI futures surpassed the $110 mark, and wholesale gasoline prices are following suit down the supply chain, both providing a leading indicator of where gas prices are headed next. We find below that prices at the pump could rise well beyond $4 with upper-end targets of even $4.50 if geopolitical turmoil in Ukraine worsens or supplies globally tighten.

Gas prices at the pump have never been this high for this time of year.

The transition to a summer grade versus winter fuel grade will also increase prices.

A sharp rise in gas prices is causing a drag on consumer sentiment and will likely impact President Biden’s polling data with another drop.

The shock to energy prices is sparking staglfation fears as it stokes inflation while suppressing economic growth. Commodities this week posted their largest weekly gain since 1974 (a time when inflation was rampant). Jim Bianco of Bianco Research points out:

Not every recession is led by a 50% rise in crude.

But every 50% rise in crude has led a recession. pic.twitter.com/PN3vWuzQj9

Inflation is widespread as consumers are plagued with some of the highest food prices in a decade. The combo of high gas and food prices will impact household spending patterns and dent sentiment ahead of the midterms, but just this morning, the Biden administration stated – with absolutely no ‘scientific’ support – that it’s uniquely well-positioned to deal with inflation.  We shall see… 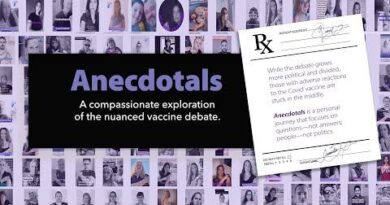