Another high integrity patriot, former BlackRock portfolio manager Edward Dowd, is speaking out about the real motivations behind the pandemic, which he believes aren’t about COVID at all. Instead, it’s all about money — specifically a global debt problem and an imminent global collapse of the financial industry.

During his career, Dowd witnessed two bubbles — corporate fraud and then bank fraud — and now he believes we’re in the third bubble, which involves central banks and governments.1

“A lot of the regulatory agencies have been captured by deep-pocketed money interests, and so we have to spread the word and awareness through educating people, because the governments aren’t going to come and rescue us this time. We, the people, are going to do it, I believe,” he says.2

Dowd became suspicious of COVID-19 shots early on, as he reviewed data on side effects from the Vaccine Adverse Event Reporting System (VAERS). “These jabs kill people and they maim people. That’s my personal belief, and I think I’m 100% correct,” he says.3

Dowd has been analyzing data about mortality rates before and after COVID-19 shots became widespread, and found that death rates worsened in 2021 — after the shots became prevalent — compared to 2020, particularly among non-COVID-related deaths among young people.

For instance, Scott Davison, the CEO of Indiana-based insurance company OneAmerica, reported the death rate for 18- to 64-year-olds has risen 40% compared to before the pandemic.4

Further, insurance companies citing higher mortality rates include Hartford Insurance Group, which announced mortality increased 32% from 2019 and 20% from 2020 prior to the shots. Lincoln National also stated death claims have increased 13.7% year over year and 54% in quarter 4 compared to 2019.5 Dowd tweeted:6

“Randy Frietag CFO just explained that in 2021 the share of young people dying from covid doubled in the back half of the year & that’s driven the result for Lincoln & its peers. He cited 40% in 3Q and 35% in 4Q were below the age of 65 … Mandates are killing folks … This shouldn’t be happening with miracle vaccines in a working age population period and a mild Omicron.”

Further, Dowd pointed out “a spike in mortality among younger, working-age individuals coincided with vaccine mandates. The spike in younger deaths peaked in Q3 2021 when COVID deaths were extremely low (but rising into the end of September).”7

Dowd also reported data from public funeral home company Carriage Services, which announced a 28% increase in September 2021 compared to September 2020, while August had a 13% increase. He tweeted:8,9

“Business has been quite good since the introduction of the vaccines & the stock was up 106% in 2021. Curious no? Guys this is shocking as 89% of Funeral homes are private in US. We are seeing the tip of the iceberg.”

The Global Debt Bubble Is at Its Peak

The pandemic was the perfect cover for central banks to print money for an “emergency,” Dowd said.10 “Under the cover of Covid they were able to print 65% more money to keep this thing afloat, but we’re at the end days here.”11 After the Great Financial Crisis, the decision was made to increase the money supply, but for every dollar you create, you create a dollar in debt, which then gets multiplied across the globe.

This debt-based financial system is unsustainable and Dowd believes it’s on the brink of collapse. “My overarching thesis is that we have a global debt problem, and after the Great Financial Crisis (of 2007-2008), all the central banks and the governments started pumping money into the system.”12 Since 2008, the central banks have cooperated to keep the debt bubble afloat — he used the example of negative yielding bonds in Europe — but it can’t stay afloat forever.

Restrictions on travel, vaccine passports and rampant censorship enacted as measures to control the pandemic are all a global way to control the collapse and its aftermath, Dowd believes, put in place under the guise of medical care:13

“If you know a debt bubble is going to blow up, and pensions won’t be able to be paid and people’s life savings will be wiped out, wouldn’t it be interesting to use COVID as cover to set up a system to prevent all that from happening, a medical system … under the guise of medical welfare or help. It’s a stealth tyrannical system that can be switched from medical to riot prevention pretty quick.”

“That’s what I would do if I was anticipating a global debt problem,” he added.14 When asked whether the collapse is guaranteed, Dowd said, “Absolutely, it’s just a matter of time.” He didn’t want to speculate on whether the collapse would be this year, next year or at another point in the future, but believes it will be sooner rather than later. Still, he stressed that people shouldn’t run out to make investment decisions based on this prediction.

The Cat Is Out of the Bag

With solid data that non-COVID deaths have skyrocketed among young people since the introduction of COVID-19 shots, evidence of fraud in Pfizer’s COVID shot trials and disturbing Department of Defense (DOD) data on COVID injection side effects, Dowd believes it’s only a matter of time before the criminals behind this scheme are held accountable.

“The responses from governments to this virus that doesn’t kill 99.9% of us makes no sense. And they’re all unified in their determination to put in these systems — these digital vaccination/passport systems. They’re all globally synced. They all want us to get these jabs, and it’s too unified. I suspect there’s a problem coming down the road.”

The systems, including ever-expanding plans for digital currency, vaccine passports and digital IDs, are in place for control and power.17 While digital IDs are being promoted as convenient and easy, underneath it is the ability to track — and tax — everything you do.

If you buy the “wrong” products or foods, you could be penalized by being heavily taxed, for instance, and there’s no limit to how high the tax could go or what products or activities could be affected. Even the promotion of fake meat in lieu of real animal protein, Dowd believes, is a way of turning people off animal-based protein, which is key for health and growth. “They want you to get sick and die,” he said, or at the very least to stay physically weak.

“It’s a total enslavement system,” Dowd said. “And then they can cut off your digital currency if you behave badly, like they do in China … digital currency and social credit will be tied. If you’re a ‘bad citizen,’ they turn it off and you disappear.”18 The answer, Dowd believes, lies in eliminating the debt-based monetary system:19

“We have to have a monetary system that is no longer debt-based … that allows real investments in real things, not financial speculation … I think it’s going to go from global back to local. So it’s really important to make real human relationships locally, develop a network of people who you trust, who you can rely on that will take care of you. It’s not about money. It’s about human connection and taking care of each other.”

In the meantime, he stressed that “cash is good” if you think a financial crash is looming and offered these warning signs of imminent financial collapse:

Dowd was wary of getting a COVID-19 shot from the beginning. “Operation Warp Speed sounds like a disaster,” he said, noting that the drug is experimental and it normally takes seven to 10 years for safety data for shots to be effective. He saw side effects to the shots being reported to the VAERS database early on, so he was very suspicious and didn’t take the shot.

Then, around November, a friend in the biotech industry told him that the all-cause mortality endpoint had been missed by Pfizer in the original clinical trial — this means that in the jab group there were more deaths than in the placebo group. Normally, during the drug approval process, if you fail that endpoint, you do not get approved.

Dowd said. “When that came out in November, the biotech executives who saw that decided they weren’t going to get boosters, and the people who weren’t vaxxed were not going to get vaxxed.”20 Seeing we’ve been misled, Dowd started to share his thoughts on Twitter. Around that time, the FDA decided to hide the clinical data from the trial for 75 years.

“When I saw that, that’s when I got very vocal and said fraud has occurred. How do I know that? They won’t show us the clinical data.”21 Then, he spoke with Brooke Jackson, a regional director formerly employed by Pfizer subcontractor Ventavia Research Group, which was testing Pfizer’s COVID-19 vaccine.

She witnessed falsified data, unblinded patients, inadequately trained vaccinators and lack of proper follow-up on adverse events that were reported. After notifying Ventavia about her concerns, repeatedly, she made a complaint to the U.S. Food and Drug Administration — and was fired the same day.22 Dowd believes this fraud could not have occurred without the help of the FDA.

If you thought you’d be done with COVID-19 shots after the first two or three doses, you’re mistaken. The end game was revealed in footage published by Project Veritas, in which FDA executive officer of countermeasures initiative Christopher Cole speaks about the FDA’s conflicts of interest.

“You’ll have to get an annual shot [COVID vaccine],” he said. “I mean, it hasn’t been formally announced yet because they don’t want to, like, rile everyone up.” He explained:23

“Well, there’s a money incentive for Pfizer and the drug companies to promote additional vaccinations … it’ll be recurring fountain of revenue. It might not be that much initially, but it’ll be recurring — if they can — if they can get every person required at an annual vaccine, that is a recurring return of money going into their company … that’s one of the benefits. They clearly want it also for that reason.”

Cole also states, “Biden wants to inoculate as many people as possible” and, when it comes to approving COVID-19 shots for toddlers, states, “They’re not going to not approve [emergency use authorization for children 5 years old or less].”24

In an official statement, the FDA responded to Cole’s remarks by saying, “The person purportedly in the video does not work on vaccine matters and does not represent the views of the FDA.”25

However, as it stands, looking to Wall Street may give some of the greatest clues that what Dowd says is correct — even with COVID-19 shots so prevalent, Big Pharma stocks are dropping. Moderna, for instance, was down nearly 70% from its all-time highs of 2021.26 “In a normal time, that would make lots of news.” The answer, he believes, lies in each person speaking up for freedom:27 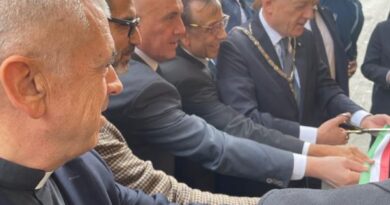 One World Religion: A Catholic Bishop and a Grand Master of Freemasonry Inaugurate a Masonic Temple Together!