He’s sure that “the world is listening to Russia,” but very much unsure to what extent “it hears us,” he said.

There’s no ambiguity about Russia’s demilitarization and deNazification campaign, its importance to eliminate the scourge of US-installed fascist tyranny in Ukraine.

No responsible officials are pleased about deaths and destruction.

It’s “been happening in Donbass for eight years and is now happening during Russia’s special military operation,” Lavrov stressed, adding:

“The goal of this operation is to stop any war that could take place on Ukrainian territory or that could start from there.”

“I have no doubt that a solution will be found.”

“Our minimum terms (in compliance with the rule of law) are well known.”

“They are being discussed, in part, at the talks with Ukrainian representatives.”

Yet Kiev representatives postponed talks for the second time before showing up.

“There is no doubt whatsoever that Ukraine receives instructions from Washington.”

Its officials “are not independent at all.”

But “talks must take place” in pursuit of peace and regional stability.

“We can no longer tolerate the threat of direct attack on the Russian Federation from the territory of Ukraine.”

“Such threats are fixed in the current doctrinal documents of the Kiev regime.”

“One of the main reasons is Ukraine’s unrelenting desire to join NATO and the reluctance of alliance members to fulfill their” indivisibility of security commitments as mandated by the 1997 Founding Act agreement between Russia and NATO.

All countries may join alliances at their discretion.

But none may enhance their security at the expense of others.

“No organization (or alliance) can claim dominance in the Euro-Atlantic space, which is exactly what NATO is doing now,” said Lavrov.

“The West strengthening its security at the expense of Russia’s security has become proverbial.”

“We are told ‘not to worry because Ukraine or any other country joining NATO will not pose a threat to Russia’s security.’ ”

“Why should the West tell us what our security needs are?”

“Just like the Americans decided for Germany and Europe what was needed for European energy security.”

“They decided that Nord Stream 2 was something that the EU did not need for its energy security, which would be ensured instead by supplies of liquefied natural gas from the United States at multiple times the cost.”

It seeks control of their resources, wanting their people exploited as serfs.

“The story of Nord Stream 2 vividly illustrated the EU’s actual place in the international arena.”

“It was coerced (by hegemon USA) into doing what it is now doing, end of story.”

“Now, they have started talking and Western capitals are issuing demands.”

I noted on Friday that his view isn’t borne out by ruptured relations between the US-dominated West and Moscow.

As long as Russia remains free from US control, chances for normalized relations in any form are off the table.

While things at some point may step back somewhat from unparalleled hostile actions by US/Western regimes toward Russia, recent events changed the dynamic beyond return to its pre-2022 status.

Lavrov noted the absurdity of how Western regimes and their MSM press agents characterize Putin an isolated man on the world stage.

He continues carrying out his duties in full compliance with constitutional powers afforded the president of Russia, including talks with his counterparts.

On whether Russia might use nuclear weapons, Lavrov cited the nation’s military doctrine that states:

“There is no ‘escalation for the sake of de-escalation.’ ”

US-installed puppet Stoltenberg recited what his master in Washington scripted for him to say.

He hyperventilated “in a propaganda frenzy, trying to curry favor with the most radical forces in the West, that nobody would ban NATO from doing whatever it wants, even if it suddenly decides to deploy nuclear weapons in Eastern Europe.”

“It does not have them. The Americans (French and Brits) do.”

His higher power in Washington decides what he will or won’t do.

The notion of “nuclear war is constantly running through the minds of Western politicians but not the minds of Russians,” said Lavrov, adding:

“I assure you that we will not let any provocations cause us to lose our balance.”

“But if a real war is unleashed against us, this must be a concern for those who are hatching such plans.”

“And I believe these plans are being hatched.”

When forced to retreat, they loot and destroy while pulling back.

In Mariupol and other Ukrainian cities, they embeded weapons in residential areas and use civilians as human shields.

“There are no Russian troops in Kharkov.”

“But we see foreigners who want to depart, including across Russian territory, being prevented from leaving at the Kharkov railway station,” Lavrov explained.

There’s no ambiguity about US-dominated NATO’s eastward expansion to near Russia’s borders.

It’s a “relentless desire to” pursue US hegemony at the expense of world peace.

There’s nothing defensive about the war-making alliance.

Shelled regularly for 8 years, no Western media representative visited Donetsk or Lugansk to witness the horrors of what’s going on and report accurately about US-sponsored, Kiev waged aggression with no end of it short of Russia’s intervention.

Asked if Russia intends to reinstall Viktor Yanukovych in power, Lavrov said posing this question shows the failure of US/Western media to read and understand what he and Vladimir Putin said time and again.

It’s for Ukrainians to choose their leadership and other officials, not foreign powers, the way hegemon USA-dominated NATO operates.

SHOCKER! WaPo Sheepishly Admits the FBI Found No Nuclear Secrets, or Anything Else, in Mar-a-Lago Raid 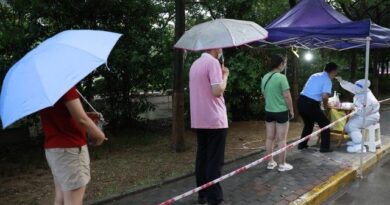