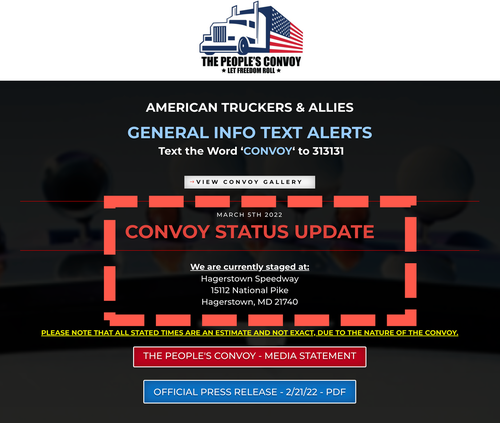 At least 1,000 ‘freedom convoy‘ vehicles converged at a speedway in Hagerstown, Maryland, on Friday night and through Saturday morning into the afternoon as some made the 2,500-mile journey from Southern California, according to WaPo. The convoy is at a staging area where their next move could be Washington, D.C., to protest the COVID-19 vaccine and other public health mandates.

NBC4 Washington reports the convoy is planning to drive onto the Capital Beltway on Saturday, but a convoy spokesperson said they’ll stay in Hagerstown for another night.

The convoy left a rural parking lot in Adelanto, California, on Feb. 22 and is now at its last staging area, about 73 miles outside of D.C.

Here’s the convoy’s route across America as it appears Hagerstown is the last staging area before D.C.

As the Epoch Times notes:

Organizers of the convoy told The Epoch Times that the group has adjusted its plans and are no longer aiming to arrive in Washington on Saturday as previously reported. Rather, they will be staying in Hagerstown, Maryland—about 70 miles northwest of Washington—for Saturday, and will be headed to an unspecified location two miles from the D.C. Beltway area either on Sunday or Monday.

Numbers in the convoy have fluctuated as vehicles and trucks join and drop off along the way. It’s unclear how many vehicles will be headed to the nation’s capital.

One of the organizers, Mike Landis, said he will be driving to Washington. He pointed to a symbolic U.S. flag that had been gifted to him by the grandson of a fallen soldier killed during WWII.

“In Oklahoma, his grandson drove from Texas to give it to me because his mother said that this is the first thing that reminds her of freedom since WWII and they wanted it to fly behind the lead truck,” he told a rally in Hagerstown on Friday.

“I can tell you one thing right now. The government can claim that they have all this opposition for us waiting in D.C. but that flag on the back of my truck will go down Constitution Avenue between the White House and the Washington Monument before this is over.”

Aerial footage from the area shows a massive line of trucks.

Nothing to see here folks! 😭😂 pic.twitter.com/ij4ArymOdS

So this is the approx. size of the convoy in Hagerstown, MD. They say they’re heading to DC today, and most likely many of them will, though there’s still not a consensus on when they’re going or even where (some say the beltway; others indicate they’re going into DC). pic.twitter.com/6R0EpSOqTq

Hundreds of trucks are seen parked at a speedway in Hagerstown.

#BREAKING Stay with @nbcwashington for how THIS #TruckerConvoy, staging in #HagerstownMD right now, could affect your weekend travel plans and possibly even your commute on Monday #BreakingNews #mdtraffic #dctraffic #vatraffic #PeoplesConvoy pic.twitter.com/oVwFJ54r9b

Here are scenes on the ground.

Many people here say there’s a rally at the “People’s Convoy” gathering in Hagerstown tonight. Lots of people lining the roads and on highway overpasses in case they decide to head out today. #PeoplesConvoy #hagerstown pic.twitter.com/OOPMCXwTtZ

Plenty of donated snacks and drinks here at the trucker’s convoy.

I’ve been told since getting here they plan on a 7pm rally here and will NOT be going to DC today. pic.twitter.com/VRuvFMLwkO

Hundreds of vehicles gathered here in #Hagerstown, Maryland, about an hour and a half from Washington DC.

Unclear if/when they will head toward DC this weekend. pic.twitter.com/4mw92Qtvf8

Covering the “People’s Convoy” for @WTOP as hundreds of trucks gather here in Hagerstown before going to the D.C. area. Melissa Ramhoff from Frostburg, Maryland, told me it’s the “best thing that has happened in two years.” #PeoplesConvoy #hagerstownspeedway pic.twitter.com/zja0gn5SeR

And there are multiple live feeds to monitor when the convoy begins the final leg to D.C. (that’s if they do).

Superantigen insert found in the spike of SARS-2