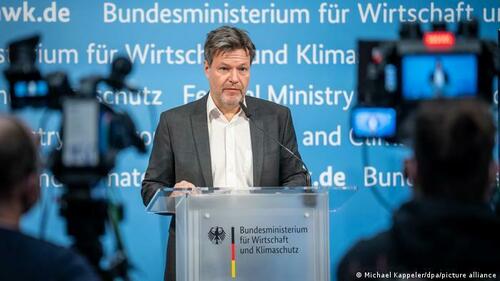 At a time when US officials are saying virtually every day that the US is in “active discussions” to ban Russian oil imports, Germany’s economy minister said that while he regrets the country is still dependent on imports from Moscow, he warned against a comprehensive ban on energy imports from Russia.

As Dutesche Welle reports, “Germany is currently still dependent on Russian fossil fuels”, Economy Minister Robert Habeck said on Thursday; he spoke out against a ban on energy imports from Russia in the wake of Moscow’s invasion of Ukraine.

“I would not advocate an embargo on Russian imports of fossil fuels. I would even oppose it,” he said after meeting German business leaders. “We need these energy supplies to maintain the price stability and energy security in Germany,” Habeck added, warning that “a shortage in supply could threaten social cohesion in Germany.”

Habeck stressed Germany “must free ourselves” from imports of Russia’s gas, coal, and oil.  In February, Germany stopped the controversial Nord Stream 2 natural gas pipeline. It has since joined other European nations in introducing a raft of sanctions against Russia over its invasion of Ukraine. Berlin even overturned its longstanding practice of blocking weapons exports to conflict zones.

Habeck, however, said Germany has already begun to feel the effects of those decisions.

“The impact of the sanctions and of the war on all sectors of the economy is so strong that we can fear a big impact,” Habeck said. The minister said any hopes that Europe’s largest economy would return to post-pandemic levels later this year were dashed.

“We had hoped that we will experience an upswing this spring, a recovery phase. But now we have the consequences of the war,” he warned. Habeck urged consumers do their bit by reducing consumption. “If you want to hurt Putin a little, then save energy,” he said.

The German government has vowed to make cheap credit available through its public lender KfW to help compensate for some of the losses.

Habeck said he hoped measures taken by the government to alleviate the impact of sanctions and high energy prices on businesses and households would avert a recession.

“And it must be said once again that it is Vladimir Putin alone who has burdened the global community with these consequences,” he added.