NATO War-Making Explained
Among the religious devotees and dupes of NWO Globalism, NATO (North Atlantic Treaty Organization) ranks right up there with the United Nations, the World Health Organization, the European Union, the World Bank and the International Monetary Fund as “indispensable” institutions of “global stability.” The truth is, that from its inception in 1949 to the present day, NATO — a wholly-owned subsidiary of the CIA which itself was founded just two years before NATO — has always been a destabilizing war-making organization in service to the Globalists.

The initial beginnings of NATO actually trace back to the Treaty of Brussels of 1948 among Belgium, France, the Netherlands and the UK — four European states which had conspired to start World War II in the first place (and, in the case of UK, France & Belgium, World War I as well). NATO is essentially the greatly expanded 20th Century version of the Rothschild-British-French bully alliance which, in addition to World War I (1914-1918), imposed the Crimean War upon Russia (1853-1856); the Opium Wars upon China (1840s & 1850s); and even plotted to enter the U.S. Civil War (1861-1864) on the side of the Confederacy — until the Russians threatened them not to.

Economically ravaged and militarily weakened by World War II, and hence, vulnerable to hidden US-CIA domination; the four dying colonial powers agreed upon a mutual defense system which would soon include all of Western Europe plus the USA. The Alliance’s first Secretary General, Lord Ismay, explained that the aims behind the new military bloc were to:

“keep the Russians (Soviets) out, the Americans in, and the Germans down.”

NATO, after having achieved all three of the objectives set forth by Ismay, and after outliving the Soviet Union and its Eastern European vassal governments, has since expanded eastward into a 29-member force — adapting the “keep the Russians out” element into one of “menace the Russians.”

* Isn’t it interesting how (((they))) still ridicule Hitler’s 1941 claim of needing to preemptively defend Germany (and all of Europe) — by invading the Soviet Union — as being a “Nazi pretext,” but only a few years after the war, the ALL-LIES set up NATO for the very same stated purpose of defending Europe from the Soviets? Evidently, Hitler was telling the truth about Stalin’s intentions, after all!

In more current times, Admiral Vladimir Komoyedov, defense committee chairman of the Russian Duma (lower house of Parliament), puts it this way: “They would even admit the North Pole to NATO for the purpose of encircling Russia.”

1.& 2. NATO would pick up where the warmongering “Entente Cordial” between Britain & France left off. // 3. A 1904 cartoon depicts John Bull (UK) and his French whore giving Germany a dirty look, as the German officer keeps a wary eye. Ten years later, this forerunner to NATO started World War I. The destruction and unconditional surrender of Germany (1945) and the establishment of the CIA (born 1947) enabled the Globalists to begin shaping the corrupted and libtarded European Union of today. Notice the similarity of the NATO & CIA symbols. // 3. The eastward-expanding NATO (born 1949) is also a key element of the New World Order.

With this bit of historical context in mind, we can better understand the Globalist butt-hurt of the past few years — “the Trump years” — as expressed in one anti-Trump / anti-Putin attack published by the seditious scum at Sulzberger’s Slimes back in 2018. From that article:

“Only in the last quarter-century has Latvia been able to reclaim its nationhood, and only in the last decade has it felt secure in that claim. The security came from one thing: joining NATO, an alliance of nations forged after the fires of World War II and expanded during the Cold War as a buffer against Soviet aggression.

Now, with Russia once again on the prowl, that alliance seems to be at risk in ways that were virtually inconceivable when Latvia joined in 2004.”

So, the innocent and peaceful Russians, who have patiently tolerated every US/NATO calumny (a $10 word for slander), every form of domestic political interference, and every external military provocation (right on their very border!) are the ones “on the prowl,” eh? Oh the bloody deceitful drama! What does Putin, whose country already spans 11 time zones, need to swallow up tiny Latvia for? The only ones with nefarious design on Latvia and other tiny eastern states are the N.W.O. kingpins who seek to deploy as many missiles, tanks and troops on Russia’s doorsteps. It is they, not Putin & Trump, who, by dragging Latvia into this tense environment, created an “existential threat” to that tiny Baltic state.

Fake News Headline / Sub-headline — The Express (UK)
WW3 Will Start in Latvia. Expert Envisages Armageddon with Russia.
As we saw with the barbarism unleashed upon Yugoslavia, Afghanistan and Libya, NATO is, and has always been, a violent, dangerous and cruel war machine. Indeed, the bloody beast selected to be very first “Supreme Allied Commander” of NATO was that vile mass-murderer of 1.5 million German POW’s, General Dwight D. Eisenhower — a position (which he held concurrently with his unmerited, resume-enhancing no-show job as president of “prestigious” Columbia University) from which the Globalists were to soon launch his “Republican” candidacy for president.

The more recent suicidal game of “chicken” with Russia — which had been deactivated by Trump — was intended to kick off World War III. To that end, the Alliance had stationed many thousands troops while staging large scale war-games in Eastern Europe — all part of an effort to bait Putin into drawing “first blood.”

Exactly as Lord Ismay had said, Germany and the US (its people, that is) are also adversely impacted by NATO. For Americans, the expensive NATO quagmire keeps us entangled with and enslaved to Globalist schemes. The game spelled out in “debunked” Protocols of the Learned Elders of Zion about 120 years ago remains in play today:

PROTOCOL VII // Article 3: “We must be in a position to respond to every act of opposition by war with the neighbors of that country which dares to oppose us: but if these neighbors should also venture to stand collectively together against us, then we must offer resistance by a universal war.”

And with NATO now expanded right up to the borders of Russia, the ultimate World War III tripwire can be activated at any time (and probably would have been by now had Killary been elected President in 2016).

As for Germany, NATO, especially in recent years, has become a source of great stress and anxiety for that country. Situated at the center of Europe, the Germans understand that World War III would touch their soil very quickly. Sadly, there is nothing Germany can do because the potentially powerful nation has been occupied and “kept down” ever since the tragic result of “The Good War.”

Pictures > see at link: https://www.realhistorychan.com/nato.html
In service to the New World Order, the conspirators at New York’s Council on Foreign Relations (and also London’s Chatham House) blew up Germany, Italy and much of northern France, subjugated the other nations of Europe, assisted the rise of the Soviet Union as a global military power (Lend-Lease, Yalta etc) — and then established NATO as a military power to counter the very Soviet threat which they had deliberately created in the first place! // Hiroshima Harry Truman signs off on NATO.

NATO is and has always been, a great big lie — which was why the conservative anti-communist legend, Senator Robert A. Taft (R-OH) voted against NATO membership in 1949. In a speech following his “No” vote, Taft said:

“A joint military program has already been made… It thus becomes an offensive and defensive military alliance against Russia. I believe our foreign policy should be aimed primarily at security and peace, and I believe such an alliance is more likely to produce war than peace. A third world war would be the greatest tragedy the world has ever suffered. Even if we won the war, we this time would probably suffer tremendous destruction, our economic system would be crippled, and we would lose our liberties and free system just as the Second World War destroyed the free systems of Europe. It might easily destroy civilization on this earth…”

Tell it Senator. Tell it! — By the way, Taft was expected to be elected president in 1952 — until the “instant Republican” Eisenhower came along and cheated him out of the party’s nomination.

Nothing has changed since Taft’s times. If anything, the arguments in favor of keeping NATO in existence are now even more absurd. Not a single one of the NATO member nations and mini-nations faces any external threats from Russia — and nor do any of the states still being considered for expanded membership, like Ukraine and Georgia. So let us all hope that the Trump-Putin understanding that got the One Worlders so agitated marked the beginning of the end for this purely offensive military organization.

See pictures at link below.
1. In 1949, Robert Taft — “Mr. Republican” — warned that NATO would actually be an offensive organization that could one day drag the United States into World War III. By that time, Taft was on track to become president in 1952. The Globalists then recruited NATO Commander General Dwight D. Eisenhower to literally steal the nomination from Taft at the 1952 GOP convention. (Read “I Don’t Like Ike,” by M S King) // 2 & 3. The merciless and murderous bombardment of Yugoslavia and Libya dispelled the myth of NATO existing as a “defensive” organization.
Source: Mike King – https://www.realhistorychan.com/updates–archives-2.html 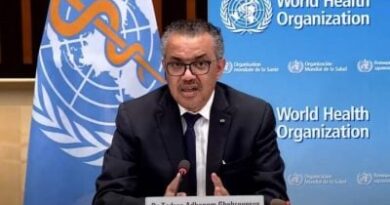 “Factual Chaos” at the WHO? Dr. Tedros: Monkeypox Outbreak Is “Among Men Who Have Sex with Men”

Democrat-Permitted Mobs As Modern-Day Turbas: Agents Of A Repressive Anarcho-Tyranny