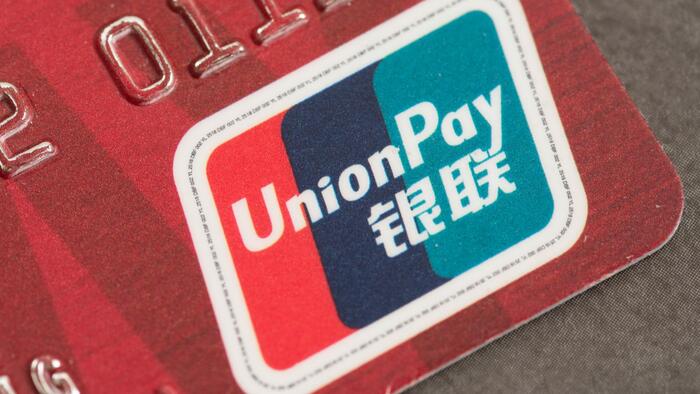 Yesterday, when reporting that both Visa and MasterCard had suspended operations in Russia just hours after Ukrainian President Volodymyr Zelenskiy called on the companies to halt all business in Russia during a video call with U.S. lawmakers, we said that “with this latest escalation in Russia’s comprehensive expulsion from the western financial system, expect a surge in usage for China’s UnionPay credit card system as millions of former Visa/MC users in Russia look east.”

One day later, Reuters has confirmed this development, writing that “several Russian banks said on Sunday they would soon start issuing cards using the Chinese UnionPay card operator’s system coupled with Russia’s own Mir network, after Visa and MasterCard said they were suspending operations in Russia.” State-owned UnionPay is the provider of most card payments in China.

Announcements regarding the switch to UnionPay came on Sunday from Sberbank, Russia’s biggest lender, as well as Alfa Bank and Tinkoff.

As Bloomberg adds, the move could allow Russians to make some payments overseas, with UnionPay operating in 180 countries and regions. Visa and Mastercard said that any transactions initiated with their cards issued in Russia will no longer work outside the country from March 10.

The Bank of Russia is also temporarily reducing the amount of information commercial banks are required to publish in an effort to limit the risks from international sanctions. Starting with statements for February, banks will no longer have to release accounts prepared to national standards or make any additional disclosures on their websites, the central bank said in a statement.

The central bank of Russia advised its citizens to use cash abroad. It said Mir cards could also be used in Turkey, Vietnam, Armenia, Belarus, Kazakhstan, Kyrgyzstan, Tajikistan and the breakaway territories of South Ossetia and Abkhazia.

The moves are “in addition to the previous steps we have taken, which include halting our relationships with banks in Russia impacted by the U.S. and international government sanctions,” American Express said.

On Saturday Visa said that customers in Russia who have a card issued there can still pay for goods and services in the country, but the company won’t process the transactions. Processing will be left to Russia’s National Payment Card System, or NSPK, according to Bloomberg.

Visa and Mastercard products issued by Russian banks will continue to work until they expire, according to the Russian central bank.

On Saturday, PayPal also announced it has shut down all its services in Russia due to “the current circumstances”. The announcement was made in a letter PayPal CEO Dan Schulman sent to Ukraine’s Deputy Prime Minister Mykhailo Fedorov expressing solidarity with the Ukrainian people.

We received a letter from @Dan_Schulman, CEO PayPal. So now it’s official: PayPal shuts down its services in Russia citing Ukraine aggression. Thank you @PayPal for your supporting! Hope that soon you will open it in for 🇺🇦 pic.twitter.com/RaJxEMSLQe

The global payment processors are the latest companies to join a growing list of US tech and internet sector giants who are boycotting Russia over the Putin-ordered invasion, currently in the middle of its second week.

Expert Warns US Descending Into ‘Anarchy’ Amid Heightened Distrust Of DOJ, Law Enforcement