He’s a noted military expert. I am not.

He commented critically on RT’s reporting as have I.

While it’s been reporting important information about Russia’s demilitarizing and deNazification campaign in Ukraine, I’ve been critical of its TV reporting overall.

Notably because it blacklisted distinguished guests invited on regularly long ago in favor of lessers — too many with little to say worth hearing.

Indeed they’ve been a rare few exceptions to the rule, especially since Russia’s campaign began.

But in following RT’s newscasts since Feb. 24 — not its other programming — I recall one guest alone of the caliber it used to invite on regularly for straight-talk truth-telling on key issues.

Now is the time to reinvite these individuals back on air to the exclusion of lessers.

On Saturday, Martyanov said the following:

“I don’t know why people even bother.”

“I am on record. Remove these political science and ‘history’ clowns from military affairs” they know nothing about.

He quoted one RT guest who made comments to the effect that success of Russia’s operation depends on if it’s victorious.

“In related news, water is wet, the sky is blue and we need to breathe air to survive.”

Most US/NATO-supplied weapons are of the “anti-tank and manpad variety.”

“While manpads could be a danger to low flying aircraft, especially helicopters, they are primarily a danger AFTER the war around airports with commercial aviation.”

Kiev “took delivery of thousands of manpads, but they were marginally effective shooting down one Su-25, allegedly one Mi-35, and we don’t know with what lone Su-34 was shot down.”

“Something tells me that Su-34 case could be that of a remaining ukie Buk-M1 and AD ambush.”

“(V)aunted and much talked about Javelin (anti-tank weapons) performed abysmally.”

“Two cases of Javelins hitting Russian tanks have been reported by Russian MoD.”

“In both cases, tanks continued with the task.”

“One of the crews had minor concussions and continued with the task in their tank and destroyed two ukie tanks. They will be awarded.”

“So, all in all, all those ATMs, manpads and RPGs are primarily weapons for what Washington thinks will be a prolonged guerrilla warfare…”

“(B)ut why they are delusional about creating a ‘second Afghanistan’ for Russians is a separate topic.”

“I am on record…Washington yet again fails to understand the nature of the war and how it is prosecuted.”

“Russia IS NOT going to occupy (Ukraine), let alone in parts where steppes and sparse forest-steppes flow into the alpine and forestry landscape of Western Ukraine.”

“Moreover, that will be new, reconstituted, Ukrainian security forces which will be dealing with the issue of a residual nazi infestation.”

As I mentioned in a same-day article, Martyanov explained the following:

“NO amount of old MiGs will make any difference militarily…”

“(N)or will any NATO fighters.”

They’ll “be detected, tracked and shot down in Ukrainian air space.”

“(T)he US (faces) the final obliteration of its proxy force” in Ukraine.

It’s “desperate not to repeat a debacle of Afghanistan, but this is exactly what it is especially since Russian Armed Forces already wiped out most of” Ukraine’s war machine capabilities.

“Russia in Ukraine is not to gain territory…”

It’s forces are “there to wipe out the Kiev regime’s military and Nazi-driven security machine and is accomplishing her task really well.”

The US-dominated West is “hysterical because they know” the following, short of admitting it:

The “incompetence” of their regimes “is being exposed” for observers to see.

“Their lies and disinformation are breaking down.”

Destruction of Nazified thugs they supplied with billions of dollars worth of weapons since 2014 is “inevitable.”

Its war machine is a faint shadow of its former self.

Most of what remains is embedded in cities like Mariupol — where Nazified battalions hold civilians as human shields for protection.

Nonsense reports like the following will end once the West can no longer conceal reality on the ground:

“Its pilots and air defenses have prevented Russian fighter jets from conquering the skies (sic).”

Fact: If Nazified Ukrainian forces weren’t holding civilians as human shields in cities where they’re embedded, fighting would have ended by now.

Fact: Losers, not winners, blow up bridges and destroy other infrastructure.

Fact: Its military bases and air defenses were destroyed.

“A rush to failure (sic)…How the Russian military started off so badly in Ukraine (sic).”

“The early stages of the campaign were reminiscent of the Russian army of almost 30 years ago (sic).”

“(U)nits lack clear direction and (are) dying horribly as a result (sic).”

“(T)he strategy has stretched supply lines and morale to a breaking point (sic).”

“Russian tanks and military equipment have, at times, gotten stuck in mud or run out of gas (sic).”

The above rubbish and more of the same applies to Ukraine’s smashed military capabilities — clearly not to Russia’s campaign.

“Putin’s war is a nightmare for the Ukrainian people and for Russia (sic).”

Things are going “badly for the Kremlin (sic).”

“Putin’s Quagmire (sic): Russia’s Invasion of Ukraine Is a Strategic Disaster for the Kremlin (sic).”

Russia is winning in Ukraine.

The Media’s Rank Dishonesty About ‘Climate Change’ And Hurricane Ian 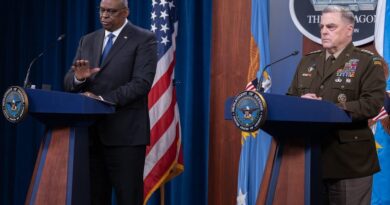 If The U.S. Is Dragged Into WW3, Where Will Biden Find Enough New Troops That Are Willing To Fight?