Authored by Techno Fog via The Reactionary,

Beware the false flags. But also beware the fake news and false promises, as they are the means for dangerous ends: increased U.S. and NATO involvement in the war between Russia and Ukraine.

On Thursday, Senator Lindsey Graham – a longtime member of the Washington D.C. war party – called for the assassination of Russian President Vladimir Putin.

Florida Senator Marco Rubio soon followed with claims that Putin would “use chemical or biological weapons” and “slaughter millions.” This same Marco Rubio has been a proponent of NATO expansion – the very policy that contributed to the environment that led to Russia’s invasion.

If Putin’s goal is to “slaughter millions” (or even if that is a secondary result of his goals), he sure is going about it the wrong way. Hundreds of thousands of Ukrainians have sought security in Hungary and Romania. More than 700,000 Ukrainians have fled to Poland, Ukraine’s neighbor to the west. Certainly Russia has the means to target these fleeing civilians. Even when Russia seized the Ukrainian port city of Kherson, there were reports of 300 dead civilians after “days of intense fighting.” We can grieve the loss of life and still demand U.S. politicians convey accurate information to Americans.

Those Ukrainians who have remained at their homes have taken to the streets to protest Russia’s occupation of their country. Have they not heard Senator Rubio’s warnings?

Huge turnout at a protest against the Russian occupation in Russian-occupied Kherson.
pic.twitter.com/nJKkiD7U8i

We assume the purpose of Rubio’s comments are not to advance the truth, but to spur increased U.S. involvement in Ukraine. To us, this means a no-fly-zone over Ukrainian airspace and NATO boots on the ground in Ukraine. After all, according to Rubio what is the alternative to intervention? “Millions” dead. It’s Rubio’s indirect call for the U.S. to enter this war.

No doubt much of this is being fueled by Ukraine President Zelensky, whose fight for his people includes spreading falsehoods to goad the West into action. Zelensky is now demanding a no-fly-zone over Ukraine and is asking for more American weapons. West Virginia Senator Joe Manchin is receptive, stating this morning “I would take nothing off the table.”

On zoom call now with President Zelensky of #Ukraine pic.twitter.com/xhgbpIwVD9

Back to Rubio. We should be scared to think that Rubio believes what he says. It’s just as likely, however, that Rubio’s comments – and the similar statements of those in power – are the result of Russian advances in Ukraine.

In other words, the window for their desired U.S./NATO intervention in Ukraine closes as Russia continues to take more territory. Desperation leads to escalated rhetoric, and explains the unhinged statements about the re-emergence of Stalin and warnings that Putin will use nuclear weapons.

To the credit of Secretary of State Anthony Blinken, the Biden Administration is shutting down talks of a no-fly-zone. From this morning:

Todd: Why rule out the no-fly zone? Why not make Putin think it’s possible?

Blinken, after a long explanation: “…For everything we’re doing for Ukraine, the president also has a responsibility to not get us into a direct conflict, a direct war with Russia, a nuclear power…” pic.twitter.com/1RQxR2lezp

All the while, there persists, due to social media and western press, a large degree of false hope concerning Ukraine’s chances for victory. The theory being that Ukraine will thwart Russia if only they could get a little more help. In reality, Russia is winning this war. Cities are encircled (if not outright taken), Kyiv faces Russian troops from its west and its east, and Russia may soon own the Ukrainian coast.

#Russian forces in #Ukraine may have entered a possibly brief operational pause as they prepare to resume operations against #Kyiv, #Kharkiv, #Mykolayiv, and possibly #Odesa in the next 24-48 hours. Read the latest from @TheStudyofWar and @criticalthreats:https://t.co/5neCMG8col pic.twitter.com/xGBXtwtJm2

Meanwhile, per the latest reports, negotiations between the countries are to resume on Monday. According to Reuters, Russian news reported that “the Ukrainian side had shown some openness in the second round to reaching an agreement.”

Right now, Zelensky has a tough decision: continue fighting or come to terms with Russia. The decision becomes less difficult as Russia advances, if only because Russian success limits Ukraine’s options and bargaining power. This desperation and the diminished likelihood of Ukrainian success only increases the potential for a false flag operation to justify Western involvement in this war. 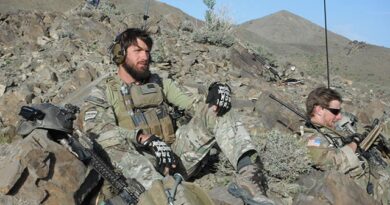 Derrick Anderson: Abigail Spanberger Gets Permission from Nancy Pelosi and the ‘Squad’ to Appear Moderate