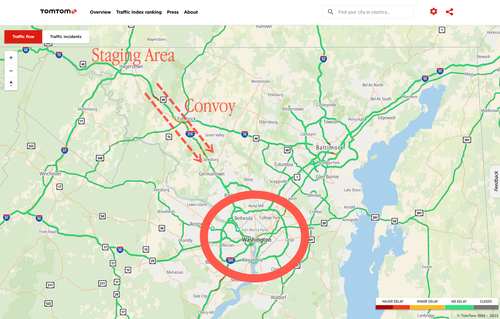 The “People’s Convoy” of semi-trucks (some with trailers), motorhomes, trucks, SUVs, and cars embarked from the speedway in Hagerstown, Maryland, Sunday morning towards the outskirts of Washington. They’re expected to arrive on the Capital Beltway later today and circle the stretch of highway that encompasses DC “until the group’s demands are met,” Brian Brase, a convoy organizer, told WaPo.

Data from geolocation technology company TomTom shows the convoy has left Hagerstown and is already clogging up miles of highway. Hagerstown is about a 70-mile drive from DC. The Daily Mail says the convoy could be up to 30 miles long.

Brase said the convoy’s plan Sunday is to drive slow (without stopping) around the Beltway twice before returning to the staging area in Hagerstown. The move will be repeated each day of the week until the convoy’s demands are met.

Sunday “is a show of just how big we are and just how serious we are,” the convoy organizer said. He said the group wants an immediate end to the national emergency declaration in response to the virus pandemic more than two years ago.

“We’re going to be a huge pain,” Brase said. He noted that other convoys are en route and will join them.

“We’re trying to work with our local law enforcement communities because we want them to understand that we are law-abiding citizens that are just exercising our rights to this protest,” he said. But “every day is going to elevate what we do.”

“We want to show the American people how large we are.” Brase said. “And we want to show our congressional leaders that we’re serious and we are here to negotiate. We are here to talk. We are law-abiding. We are peaceful. We don’t want to shut anything down, and we’re not coming downtown.”

On social media, users are reporting the convoy is en route to the Capital Beltway.

PEOPLE’S CONVOY: On the ground in Maryland where the Convoy is making two laps along the DC Beltway today.

The convoy plans to return to the Hagerstown Speedway where it left from earlier this morning after circling the Beltway. @FoxNews @FoxNewsMMR pic.twitter.com/IBTHZoMJew

Maryland State Police have issued a warning to motorists as they must plan for “higher volumes of traffic” today.

.@MDSP urge motorists to plan ahead for possible higher volumes of traffic while traveling in and around the Maryland National Capital Region. Follow https://t.co/2ZO0eKCuel for the latest traffic alerts and road conditions. pic.twitter.com/DqlVzAtsdx

Watch live feeds of the convoy.

The 55th Speaker: Kevin McCarthy Is No Nancy Pelosi… And That’s A Good Thing 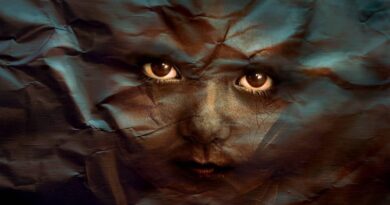 Negative energy: 21 ways to clear and get rid of it