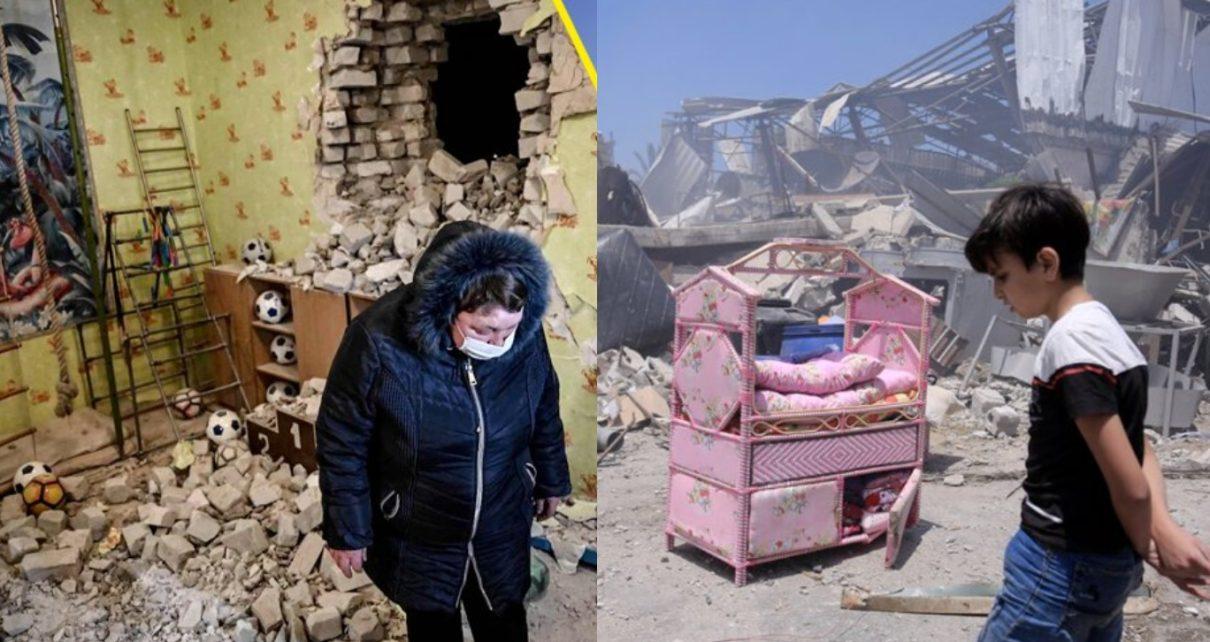 Since the Russian invasion of Ukraine, which began on February 24, we have witnessed the hypocrisy of Western elitists and their supporters perhaps more now than ever before. If anything, this is a teachable moment in history.

From talk of the Western nation’s peoples being “civilized” opposed to the foreign “others” our governments kill in the millions, to certifiable war criminals now opposing an invasion of a sovereign country, the world has gone mad. Below we will go through just a few examples of the hypocrisy from both the pro-NATO warmongers and their supporters.

Free Speech, Or Not Really

To begin with, we have the self-proclaimed bastions of “free speech” openly opposing freedom of speech. Russia Today (RT) and Sputnik have been banned throughout the European Union (EU), so that member nations cannot access the channel anywhere. Canadian telecom operators have now banned RT also and in the United Kingdom, the Website for RT and its youtube account are not accessible and the only reason it still airs on television is due to the fear of a Russian retaliation against the BBC.

So why the ban on RT? Has it broken any laws, you may ask, or has it published provable disinformation and fake news? Nope. RT is Russian and the Russian State is invading Ukraine, that’s the reason cited here. Interesting that this is taking place in the countries that ostensibly pride themselves on “freedom and democracy,” implying the right to freely vote, act, speak and seek out information. Yet, in these same locations today, you aren’t even allowed to look at the Russian point of view, it must be censored, banned, and purged they say, and anyone who believes the “evil Russians” is a now “a traitor.”

If this is truly just about Russia, why the need for eliminating the entire RT library online, prohibiting all past content on their website and youtube from being viewed? Take a journalist like myself; I don’t talk about Europe much at all. In fact, for RT I have only spoken about the Middle East when contributing to their platforms, but now all of my work is gone. Similarly, other journalists who do not specialize in Eastern Europe, Ukraine, or Russia have now had their content banned. For me, this includes interviews with Palestinians who have lost family members, survived bombing attacks, interviews with officials in groups like Hamas and the Polisario Front, and much more — all of it now gone if you live in the UK or EU.

The reality is that RT was the only news outlet that was by nature of its large viewership able to compete with mainstream media outlets in the West. All independent media has been censored already and/or does not have the money to break through the way RT does. RT represents a real threat, in that it provides the Western world with the alternative point of view and is the most successful news outlet on youtube — or at least it was. In the US RT still exists, but for the likes of PressTV they haven’t been so lucky.

Purging the Iranian perspective, the Russian perspective, and soon the perspectives of many other non-Western States, is now very much acceptable from NATO member regimes. Additionally, FIFA, the top football (soccer) authority, is banning Russia’s teams; the Premier League is also taking action against Russian ownership of its teams; EA Sports even decided to remove Russian sports teams from their video games. Meanwhile, Saudi Arabia and the UAE are fine to own multiple clubs, despite openly carrying out war crimes with little to no consequence — even when occasionally called out by the UN.

Eurovision, which was hosted on the remains of an ethnically cleansed Palestinian village and stated at the time that politics should remain aside, is also taking action against Russia. Boycotts, Divestments and Sanctions (BDS) against Russia it seems is totally acceptable (not just the government either). Yet if we do the same in response to Israeli government crimes against the Palestinian people, we are roundly and unjustly deemed “anti-Semites” and could potentially be fired from jobs in over 20 states across America. Russia is completely being isolated from the world. This is simple hypocrisy.

The Not So Woke After-all

I remember discussing the issue of Western racism, ideological supremacy and imperialism with many people back in 2020 during the Black Lives Matter protests, during which Western liberals, who were not aware of the issue before, overnight became social justice warriors. Many of that very same crowd and the media outlets which covered the BLM protests favorably are now displaying their casual racist beliefs.

Western media have been repeatedly talking about how it’s so sad and more emotional now that war is happening to people who dress a certain way, come from Europe and are Westerners. In the case of CBS anchor Charlie D’Agato, the conflict in Ukraine hits home because it’s happening in a “relatively civilized country”, unlike “Afghanistan or Iraq” he said. Interestingly, viewable on social media and in personal encounters I’ve had, people who describe themselves as liberal are constantly talking about the “civilized world” and how “this is the only time I’ll stand with neo-Nazis” according to one individual I spoke with — he was referring to the Azov Battalion in Ukraine.

We also have little pushback against the racist abuse suffered by minority communities in Ukraine, mainly Africans, who have been physically assaulted by Ukrainian military and civilians who refused to let them enter public transport to flee conflict. Then, when some of these people had attempted to flee to places like Poland, instead of being let in with open arms like white Ukrainians, they have been refused entry according to multiple reports.

Apparently for the average Western liberal, black lives don’t really matter all that much in Ukraine, nor should we focus on the war in Yemen — the worst war on the planet, which the US and UK are actually part of — why? Because “Putin is a madman” or “Putin is literally Hitler”? Any attempt to argue back against these emotional arguments are normally futile, as the media in the West has not provided them with the capacity to possibly view the conflict in its true geopolitical context.

It’s also quite comical that we see US President Joe Biden say things like the “free world is United”, driving home the “civilized nations” point again for Westerners. What makes the West the “Free world”? What makes us “civilized” in comparison to others?

The truth here is that the Western elitists don’t mind different skin colors, sexualities, or genders at this point. Although clear cut discrimination does exist, the corporatists don’t care so much anymore. We in the West live in very diverse multi-cultural societies, and in terms of marketing to a large percentage of the populations in these countries, acceptance of the physical differences and coexistence is good for business. Where they are truly concerned and will absolutely discriminate is when it comes to separate political ideologies, which may come as a result of one’s religion, culture, or national identity — this is a massive threat to the West. If you think differently to the majority opinion, you are part of the barbarian hoards, you can be stereotyped and nobody will care to point out the bigotry against you. We see this with Muslims, Arabs, Iranians, Chinese, and we see it with Russians. In the past it was others, like the Japanese or Vietnamese for example. Anyone who sympathizes with those who aren’t part of the “civilized and free world” will also become targets as well.

This inability to accept certain foreign ideas and political ideologies, is ultimately a form of Western imperialist racism. That’s why you will see everything from the blatant; “people with blonde hair and blue eyes are dying” racist talking points, to the; “we are democratic”, and therefore better, talking points. Why is White Supremacy still a factor? Because most Westerners are White and the manufactured culture wars have now made many of them — primarily on the right — cling onto that identity tight. Race is, for the most part, an invention of the Western European elitists who used the concept of race in order to make profit — divide and conquer.

The War Criminals Are Condemning War

John Bolton is an example of the type of figure now being featured on the likes of CNN, a hardline Neo-Conservative who thinks that US boots on the ground should have been the strategy prior to Russian President, Vladimir Putin’s, invasion of Ukraine. Bolton, if he had his way, would have lead us into World War III and nuclear annihilation at this point.

Perhaps the most comical of all appearances on mainstream Western news so far, has been a Fox News segment featuring Condoleezza Rice, a former Bush Jr administration official. Rice sat with a straight face and acknowledged that invading a sovereign nation is a war crime, speaking about Russia’s invasion of Ukraine. What is perhaps most ridiculous is that Fox News saw nothing wrong with airing such an absurd interview to its viewers, evidently believing that they seriously wouldn’t think about the fact that Rice was partly responsible for the same crime she is condemning, which she committed in Iraq.

Then we have Hillary Clinton, who advocated for making the Russian people suffer in order to save the Ukrainian people. You cannot make this stuff up. However, when you have people like this on television advocating for the punishment of ordinary Russian civilians, it indicates that the propaganda machine believes it has hit its final stage.

When you constantly refer to NATO nations as the “free world” or the “civilized world” and openly make ridiculous comparisons between foreign world leaders and Hitler, then interchangeably using terms like “the Russians”, “the Iranians”, “the Chinese”, what you begin to foster is hatred towards an entire people. If the people can be associated with the government and the government is like the Nazis, then they all must be destroyed. It is this destructive propaganda that is constantly used to justify Western aggression through economic and military means. This is extremely dangerous, and if one is truly anti-racists this must be called out, stopping it in its tracks. Corporate media’s conspiracy theories, stereotypes, slander, and reporting of fake information is the real enemy here, not “the Russians”.

Tesla Jumps After Board Proposes For 3-For-1 Stock Split, Larry Ellison To Step-Down 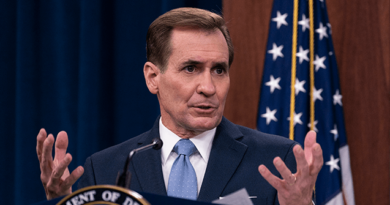 Kirby: China Needs to Step up on Russia, But Options with China Now Are ‘Diplomatic’ and ‘That’s Where They Need to Be’