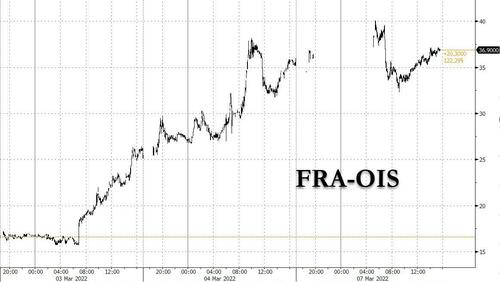 It’s not just the recent blowout in the FRA-OIS funding spread that is hinting at some major funding/liquidity dislocations beneath the market’s turbulent surface (for more details see “FRA-OIS Explodes: Here Is The Only Chart Powell Is Closely Watching, And Why It Is Soaring“).

Today another key gauge of funding stress in the credit markets started flashing red, signalling that just as Zoltan Pozsar warned last week, banks are bracing for a wave of potential funding disruptions amid the soaring geopolitical turmoil, or may already be scrambling to procure funding to meet commodity margin calls.

The cost of borrowing in 90 day commercial paper jumped by more than half a percentage point to reach 1.12% on March 4, Bloomberg reported noting that there were 12 issues of financial commercial paper with more than 81 days until maturity totaling $137 million.

The silver lining is that while commercial-paper costs reached the highest since the onset of the pandemic relative to swap rates, they still remain low relative to past crises. Of course, a big reason for that is that the Fed’s balance sheet is now a record $9 trillion while the Fed’s reverse repo facility holds a massive $1.5 trillion, although as we noted earlier, that amount has been steadily shrinking in the past week hinting that financial institutions are already reaching into the emergency liquidity stash ahead of the start of Quantitative Tightening in the next few months.

In a comment published last week by Barclays repo strategist Joseph Abate (available to pro subs), he writes that there are two reasons for the pressure on short-term unsecured bank borrowing rates.

While Abate remains complacent about the reasons behind the move, keep an eye on both CP and FRA spreads to OIS, which will be among the earliest available indicators of a major market liquidity lockdown. 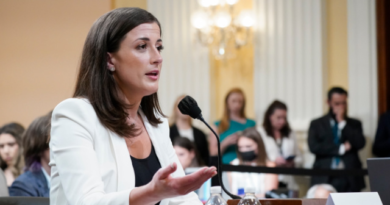 Nolte: Poll Shows No One Listening to Rigged January 6 Committee