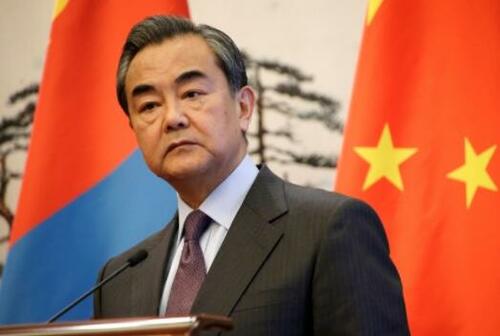 In what was by all accounts an extremely forboding briefing, Chinese Foreign Minister Wang Yi warned Monday during an annual press conference that the US shouldn’t consider building a “Pacific version of NATO to protect Taiwan, because the situations in Ukraine and Taiwan were completely different.

Wang accused the US of plotting to create an Indo-Pacific strategy designed to prevent Beijing from ever reasserting control over Taipei, Bloomberg reports.

Foreign Minister Wang Yi told his annual news briefing Monday that the “real goal” of the U.S.’s Indo-Pacific strategy was to form Asia’s answer to the North Atlantic Treaty Organization. China has often accused the U.S. of trying to form blocs to suppress its growth, a complaint that’s likely to attract greater attention after President Vladimir Putin cited similar grievances before his invasion of Ukraine.

This isn’t the first time Beijing has accused Washington of trying to form “military blocks” to suppress China’s military aspirations in the Pacific. Though, according to Bloomberg, this complaint is “likely to attract greater attention after President Vladimir Putin cited similar grievances before his invasion of Ukraine.”

Any such activity would be contrary to maintaining peace in the region, and would be “doomed to fail,” Wang sad.

“The perverse actions run counter to the common aspiration of the region for peace, development, cooperation and win-win outcomes,” Wang added. “They are doomed to fail.”

Wang’s nearly two-hour briefing – held on the sidelines of the National People’s Congress in Beijing – was peppered with complaints about the US.

Complaints about U.S. efforts to strengthen its alliance network in Asia were among several points of contention raised by Wang in the almost two-hour briefing on the sidelines of the National People’s Congress in Beijing. The senior diplomat repeatedly alluded to the U.S. as the source of problems with countries around the globe and issued some of China’s most pointed warnings yet against calls to expand U.S. ties with Taiwan.

Wang added that Taiwan will inevitably “return to the embrace of the motherland” and that any interference or meddling by the US would provoke “woeful” consequences. he also accused Americans of conflating the situation in Ukraine and the situation in Taiwan, claiming it is a “”double standard”.

“Some, while being vocal about the principle of sovereignty on the Ukrainian issue, have kept undermining China’s sovereignty and territorial integrity on the Taiwan question,” Wang says. “This is a blatant double standard.”

“This would not only push Taiwan into a precarious situation, but will also bring unbearable consequences for the U.S. side,” Wang said on the sidelines of the National People’s Congress in Beijing, later adding: “Taiwan will eventually return to the embrace of the motherland.”

China has developed an increasingly aggressive stance in the region over the past decade, perhaps in response to territorial disputes with certain other regional powers.

Several Asian nations — like their counterparts on Russia’s European frontier – have sought closer security ties with the U.S. to keep from being dominated by the region’s biggest player. China has active border disputes with neighbors including Japan, India and Vietnam and has stepped up military, diplomatic and economic pressure on Taiwan, sending warplanes on some 960 forays through the island’s air defense identification zone last year.

All of this, of course, is ultimately aimed at “the Quad” – officially the Quadrilateral Security Dialogue – the relatively novel US-led military alliance that includes some of the region’s most militarily powerful democracies: India, Australia and Japan. Cooperation among the four members began after the India Ocean tsunami in 2004, but has since expanded to include military, economic and other security-related issues, according to the Council on Foreign Relations.

“As of 2021, leaders in all four countries have become more aligned in their shared concerns about China’s increasingly assertive behavior in the region and are more willing to define a constructive agenda of cooperation.”

Is this the ‘Pacific NATO’ that Wang is talking about? While it has only four members, there’s always the possibility of expansion, as China’s neighbors become increasingly concerned about its growing military largess.