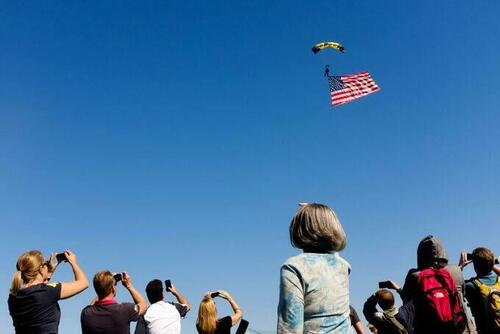 Authored by Franklin Spinney via Counterpunch.org,

While war is bad, the Russo-Ukrainian War has the champagne corks quietly popping in the Pentagon, on K Street, in the defense industry, and throughout the halls of Congress.  Taxpayers are going to be paying for their party for a long time.

It is no accident that the United States is on the cusp of the Second Cold War.

Future historians may well view the last 30 years as a case study in the institutional survival of the American Military – Industrial – Congressional Complex (MICC), together with its supporting blob now saturating the media, think tanks, academia, and the intelligence community.  Perhaps, these future historians will come also to view the Global War on Terror (GWOT) as the bridging operation that greased the transition to Cold War II by keeping defense budgets at Cold War levels after Cold War I ended.  Also, 9-11 may have re-acclimated the American people to the climate of fear now needed to sustain Cold War II for the remainder of the 21st Century.

The First Cold War’s 40-year climate of fear was something Mikhail Gorbachev tried to end.  But Presidents Clinton and Bush (the 2nd) were busy planting the seed money for a new generation of cold-war inspired weapons.  These weapons required massive future defense budgets that would require a climate of fear to sustain (especially for the across-the-board nuclear modernization program).  President Obama then locked in these programs, and won a Nobel Peace Prize to boot.  President Trump and the Dems in Congress worked overtime to ice the Pentagon’s budget cake by incestuously amplifying the growing Russophobia.

No one wants war, but rising tension and the politics of fear … and their bedfellow: demonization … had to be magnified to justify the huge bow wave of defense spending looming in the budgetary offing, particularly the trillion+ dollars to pay for the nuclear modernization program.  This “chicken” takes us back to the “egg” laid in the 1990s.

As it gradually sank in that the First Cold War had indeed ended when the Soviet threat evaporated in 1991, the titans in the defense industry understood their comfortable market for new hi-tech, high-cost weapons could dry up.  They also knew that sword makers do not have the management and engineering skills to make good affordable  plowshares.  So, they went on a Pentagon subsidized consolidation binge to gobble up access to what threatened to be a stagnating market.  Their collective logic was explained in October 1991 in a speech by William Anders, CEO of General Dynamics (see especially page 13).

At the same time, the defense industrialists recognized that market diversification was necessary.  So, it was no accident that a lobbying operation named the Committee to Expand NATO emerged in the early 1990s and was headed by a vice president of Lockheed Martin — see also Why is US Foreign Policy a Shambles?.  At the very least, in the mid-1990s, it seemed that expanding NATO implied dramatically increased requirements for what is known in NATO jargon as weapons interoperability. This promised huge new markets for American weapons, communications systems, and logistics infrastructure, as ex-Warsaw Pact countries trashed their Soviet weapons (e.g., F-16s to replace old Warsaw Pact Migs, etc.).  That this interoperability cornucopia did not materialize to the extent dreamed of is quite beside the point, when it comes to understanding the motives shaping the hopes and dreams underpinning the powerful American impulse to expand NATO — despite promises to the contrary made by leaders in the US, Germany, France, and the United Kingdom (see this page in National Security Archive).

Against the background of broken promises not to expand NATO, Mr. Putin has made several speeches explaining why NATO expansion would be a threat to Russian security.  In this sense, NATO expansion has become both the chicken and the egg when it comes to understanding the origins of the Russo-Ukrainian war, which is now on the cusp of locking in the perpetual state of fear needed to sustain a Second Cold War for the remainder of the 21st Century.

Washington observers have long argued that the Pentagon doesn’t have a strategy.  As the famous American strategic thinker, John Boyd opined repeatedly, “They are wrong,  … the strategy is simple,” (albeit focused more intensely on domestic politics than international relations).  “It is: Don’t interrupt the money flow, add to it.”

But the Pentagon’s strategy of maximizing its budget has created a growing dependency on defense spending in the American political economy.  This grotesque distortion was first recognized by President Eisenhower in 1961.  In 1987, George Kennan, forty years after he fathered the dominant US policy of “Containment” for the entire First Cold War, summed up the narcotic of defense spending, saying prophetically:

“Were the Soviet Union to sink tomorrow under the waters of the ocean, the American military-industrial complex would have to remain, substantially unchanged, until some other adversary could be invented. Anything else would be an unacceptable shock to the American economy,”

And that dear reader, is why the Russo-Ukrainian War — a predictable consequence of NATO expansion — has champagne corks popping in the Pentagon, in the defense industry, and in their wholly owned subsidiaries in Congress, think tanks, the intelligence apparat, and the press.

Understanding the internal political-economic causes of the American addiction to the narcotic of defense spending is at the heart of the problem.  This understanding is essential to reforming the foreign policy mess exacerbated by NATO expansion.

So, there is much work to be done, but a great beginning can be found in reading and updating the late Seymour Melman’s path breaking work, which began in the 1950s (e.g., see Profits Without Production, The Permanent War Economy for an introduction).

But a first step along a road to clearer thinking is for concerned American citizens to appreciate what Mr. Putin has been saying — and to understand why Mr. Putin thinks he is justified in saying it.

Franklin “Chuck” Spinney is a former military analyst for the Pentagon and a contributor to Hopeless: Barack Obama and the Politics of Illusion, published by AK Press. He be reached at chuck_spinney@mac.com

Are The FANG Stocks Dead?