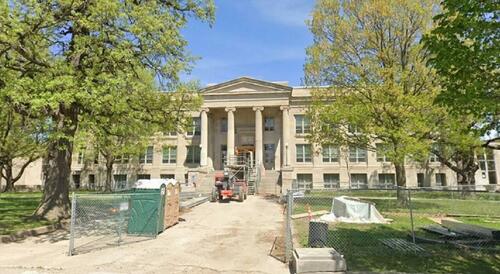 A teenage boy was killed, while two girls were wounded, during America’s latest school shooting outside an Iowa high school on Monday, authorities said.

The ages of the children who were shot were as follows: the boy was 15 years old and the two girls were ages 16 and 18. They were both hospitalized, according to fire department spokesperson Ahman Douglass, who spoke to Fox News. All threw victims were initially taken to hospitals in critical condition, he said. Authorities said that as of 1600ET, the two girls were “still alive”.

The school was placed on lockdown as authorities investigated the incident. Students were dismissed around 1:30 p.m. local time, Des Moines Public Schools tweeted. Authorities haven’t said much about the shooting; the suspect hasn’t been named, and few details about the incident have been released.

The news was originally released via a series of tweets.

There are reports of a shooting near East High School. Police are actively investigating. The district is working with staff and families. We will have more information as it becomes available.

Rand Paul: Fauci Caused 7 Million People To Die; “We’ve Caught Him Red-Handed, He Won’t Get Away”