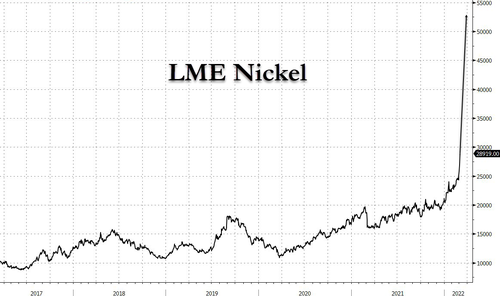 Nickel prices soared as much as 82% to $52,700 a metric ton, the highest in the 35-year history of the contract trading on the London Metal Exchange, as fears over Russian supplies triggered a historic short squeeze according to Bloomberg.

The metal added more than $22,700 to trade at a record-high $52,700 a metric ton. That builds on nickel’s 19% surge last week as banks cut exposure to Russian commodity suppliers because of Western sanctions and shippers, such as Maersk, stay clear of Russian and Ukrainian ports.

“Commodity markets are increasingly pricing in a scenario under which a significant portion of Russian supply will be excluded from the market,” Morgan Stanley wrote in a note.

“Prices are likely to remain highly volatile, until the real supply impact becomes clearer and prices can start to settle at a new equilibrium,” analysts at the bank said.

Citigroup analysts said, “the nickel market is the tightest it has been since the commodity supercycle during the 2000s.”

“Already tight markets could see even larger shortages if Russia’s mined commodity exports were to be significantly affected,” Morgan Stanley said. “Against a backdrop of generally low inventories, demand destruction would become necessary under such a scenario.”

Bloomberg data shows 70% of the global supply of nickel is used to produce stainless steel. About 7% of the metal’s supply is used in batteries for electric vehicles.

The surge in nickel prices, alongside every other major commodity, is pressuring businesses and households. Commodity prices last week had the largest weekly gain since the stagflationary period of the mid-1970s.

“The well-flagged headwind from raw material prices is accelerating as a result of the war and could potentially weigh on margins more than initially highlighted by the companies,” Deutsche Bank analysts led by Christoph Laskawi wrote last week. This could affect top carmakers, such as Tesla Inc., who uses the metal to produce its batteries.

Remember last month when Goldman’s head commodity strategist Jeff Currie warned he’s never such “shortages of everything.” Well, now the rest of the world’s is seeing it too.

“Does It Even Matter If The Fed Hikes 50 Or 75bps? It Won’t Prevent The Multiple Trainwrecks Coming Our Way” 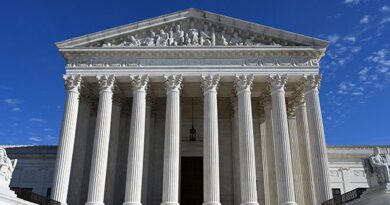 Colorado Man Dead After Lighting Himself Ablaze Outside Supreme Court