One of the most significant uncertainties of Russia’s invasion of Ukraine and the West’s potential sanctions of Russian energy imports is how it will affect the flow of oil and gas. Already, supply disruptions are materializing in Europe, where at least one oil major has begun to limit heating oil sales to wholesalers.

Europe’s largest oil company, Shell Plc, has limited sales of heating oil to wholesalers in Germany, according to Bloomberg, who spoke with two sources close to the matter.

The sources supplied Bloomberg with an email addressed to wholesalers from Shell that explained a reduction in sales guarantees it can continue meeting contractual obligations after shortages in energy markets developed following Russia’s invasion of Ukraine.

“German heating oil is a near-identical product to diesel in Europe, prices of which point to a market that’s running low on inventories. Traders are willing to pay huge premiums in order to get supplies this month rather than waiting until April. Global fuel prices are surging because of concern about petroleum supplies from Russia,” Bloomberg wrote.

On Friday, Shell bought 100,000 metric tons of flagship Urals crude from Russia for a hefty discount. The oil major wasn’t specific on which products are affected, though sources pointed out heating oil and diesel.

“One of the greatest uncertainties is if and how the escalation of economic warfare between Russia and the West will impact the flow of oil and gas,” said Victor Shum, vice president at IHS Markit, under S&P Global.

“NATO members currently buy more than half of the 7.5 million barrels a day of crude oil and refined products that Russia exports.” With European inventories already and multi-year lows, shortages appear to be already developing.

Maybe ordinary Germans are getting a whiff of what’s to come: energy shortages.

Surely many households across Europe have felt the pain of soaring natural gas prices, jumping a mindboggling 64% to 335 euros a megawatt-hour this morning — the equivalent of around $600 a barrel of oil.

“I would not advocate an embargo on Russian imports of fossil fuels. I would even oppose it,” Habeck said after meeting German business leaders. “We need these energy supplies to maintain the price stability and energy security in Germany,” Habeck added, warning that “a shortage in supply could threaten social cohesion in Germany.”

Habeck stressed Germany “must free ourselves” from imports of Russia’s gas, coal, and oil.  Though that could take years. 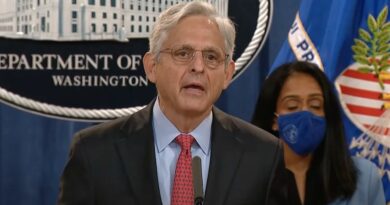 Expert: U.S. increasingly at risk of descending into chaos, anarchy as mistrust of DOJ, FBI in Biden era spreads