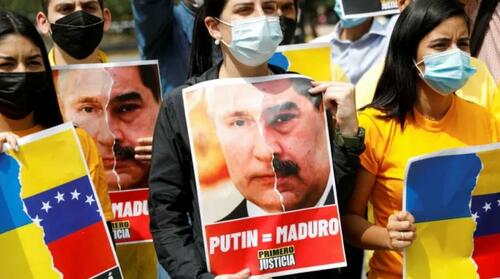 Since the start of Russia’s invasion of Ukraine, the financial press has been filled with stories about investors who are on the losing end of the historic selloff in Russian assets. There’s the Kentucky pension fund that lost millions on its position in Sberbank (Russia’s largest bank, which has decided to pull its European business due to sanctions, but was ironically excluded from the SWIFT “selective” ban), and the Russian trader who toasted to “the death of the stock market” during a Russian TV interview.

All because Russian equities have fallen by an absurd amount: the Dow Jones Russia GDR Index, an index designed to track the top Russian GDRs that trade on the LSE, plunged a mind-numbing 97% in just a few days and wiped out $572 billion.

Moscow’s stock market, of course, will remain shuttered at least until the middle of the week ahead, according to Russian authorities. But the market for Russian CDS has been a different story. Investors have seen premiums rise, but not by as much as some might have expected given the move in Russian foreign currency sovereign bonds.

As they try to account for this, some investors are aying there’s another risk to consider. And that is: what if sanctions prevent holders of CDS to collect on their winnings should a default occur?

The FT addressed several reasons why Russian CDS might not pay out even in the event of a default.

Citing a handful of traders, some anonymous, some not, the FT said CDS premiums have moved to incorporate  concerns that CDS holders might not be able to get their money if Russia defaults, which some traders believe could happen as soon as the middle of March, when the next payment by Russia is due. The big fear of course isn’t that Moscow doesn’t have the money, but that enough of its foreign currency central bank reserves have been frozen to make obtaining the euros and dollars required for settlement extremely difficult.

It’s an issue we highlighted a few days ago in a tweet:

Will Russian CDS be honored?

One EM debt trader says he has a “high conviction” that Russia won’t pay on March 16 (though Moscow made a payment just this past week on its ruble-denominated debt, which isn’t covered by the CDS).

“We have a high conviction that [Russia] will not pay,” said Marcelo Assalin, head of emerging market debt at William Blair. “But the market is totally dysfunctional. The problem we face is CDS is implying a recovery value that’s not realistic.”

Some traders are looking to the past for clues: they see Venezuela (sanctions prevented foreign buyers from purchasing its newly issued debt, just like Russia), as well as CDS “mishaps” like rental car company Europcar, in 2021, and Dutch lender SNS Reaal, in 2013. Three foreign currency bonds are subject to settlement in Russia, making the untradeable. Others have ‘fallback’ mechanisms allowing Russia to settle in rubles.

Others are worried about the possibility that the International Swaps and Derivatives Association might amend CDS contracts to reference only older bonds unaffected by the sanctions. In a statement, ISDA didn’t deny the possibility that it could mandate certain changes to these agreements.

“Members are working to comply with the sanctions, and the impact and required actions will depend on their individual circumstances,” said an ISDA spokesperson. “ISDA is in regular contact with members to identify any common, marketwide issues that may emerge, and to assist in finding mutualised solutions where appropriate.”

Most of Russia’s foreign currency bonds are still tradeable, which has allowed US megabanks like Goldman Sachs and JP Morgan to scoop up cheap debt on behalf of clients (or even perhaps for their own book, anticipating buyers down the road). But there’s always the possibility that future sanctions could freeze trading on the secondary market, creating additional risks that have contributed to the steep drop in prices.

Russian President Vladimir Putin has already taken some steps to try and avoid default on corporate and sovereign debt by issuing a decree mandating the option for payment in rubles, according to Bloomberg.

The decree establishes temporary rules for sovereign and corporate debtors to make payments to creditors from “countries that engage in hostile activities” against Russia, its companies and citizens. The government will prepare a list of such countries within two days.

Russian corporate bonds denominated in foreign currencies have plunged to deeply distressed levels in recent days as investors weighed the impact of sanctions imposed on the country in the wake of its invasion of Ukraine. The Russian government responded to the sanctions by reducing dramatically access to foreign currencies, which could restrict the ability of bondholders to receive interest and principal payments.

In the note, they upgrade a trio of Russian corporate bonds – those of Lukoil, Novolipetsk Steel and Magnitogorsk Iron & Steel to “Overweight” – which JPM sees as remaining money good (i.e., not defaulting).

The full Lukoil recovery analysis suggests that total debt coverage via international ops is at least 133% and could be as high as 212%.

There’s also the issue of optics, which of course complicates the picture of holding Russian assets in the hopes of a recovery (but probably wouldn’t have the same stigma for holders of CDS, since they’re betting on a collapse).

After all, Sen. Elizabeth Warren has already lashed out at Wall Street “opportunists”.

“Giant Wall Street banks like JPMorgan and Goldman Sachs never miss out on an opportunity to get richer even if it means capitalizing on Russia’s invasion of Ukraine and undermining sanctions placed on Russian businesses,” said Warren.

Which means politicians likely won’t have any sympathy for institutional investors who wind up burned on their Russia holdings, even if it is CDS. 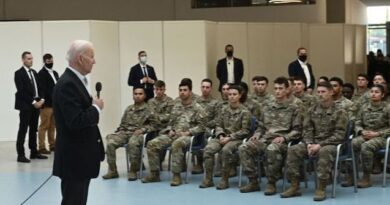 Joe Biden Tells U.S. Troops What They Will See in Ukraine ‘When You’re There’

“Its Critical”: Police Departments Across US Struggling With Staffing Shortages

“Textbook Marxism”: Amendment 1 Would Be A Dream Come True For Chicago Teachers Union To Make Its Most Radical Demands