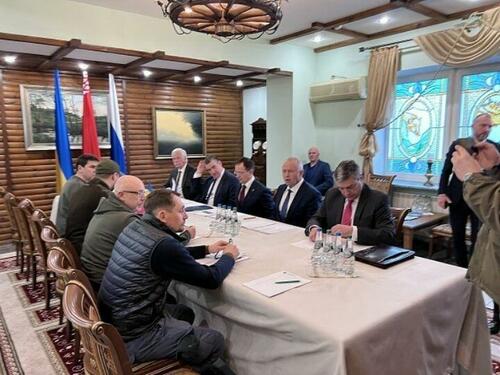 Authored by Kyle Anzalone & Will Porter via AntiWar.com,

In an early sign of compromise following Russia’s invasion of Ukraine late last month, a senior member on Kiev’s negotiation team said his country is open to remaining outside of the NATO military bloc – a key security concern raised by Moscow time and again.

Speaking to Fox News’s Nana Sajaia about the progress of the talks on Saturday, Ukraine’s chief negotiator David Arakhamia said little had been accomplished so far. With another meeting set for Monday, however, he outlined certain tradeoffs Kiev is willing to make, including its membership in the North Atlantic alliance.

“We are ready to discuss some non-NATO models. For example, there could be direct guarantees by different countries like the US, China, UK, maybe Germany and France,” Arakhamia said. “We are open to discuss such things in a broader circle, not only in bilateral discussions with Russia, but also with other partners.”

The negotiator went on to state that, currently, the bloc’s leading members are “not ready to even discuss having us in NATO, not for the closest period of five or 10 years,” despite repeated assurances that Ukraine would be admitted – a promise first made in 2008 but reiterated as recently as last summer.

While closing the door on Ukrainian NATO membership could be a step in the right direction and signal flexibility ahead of the next round of talks, it is unlikely to satisfy all of Russia’s demands. In addition to concerns over NATO expansion, Russian President Vladimir Putin has insisted that Kiev cede its claims to the Crimean Peninsula and the breakaway Donbass region, where separatist forces have been under siege by the Ukrainian military for eight years.

“I don’t think that we have a choice now to even discuss some models where we would recognize those territories [as independent],” he said. “Our position is firm. We are ready to discuss any other dynamic options, but not recognition of those territories.“

Ukraine’s chief peace negotiator says his country is open to a non-NATO model with some countries such as US and China pic.twitter.com/AsRRoJBSge

Both the Donbass and Crimea have remained outside Ukrainian rule since 2014, with the latter region – once Russian territory – annexed by Moscow soon after the Maidan coup the same year. The Donbass, meanwhile, declared independence from Kiev around the same time, breaking up into the ‘People’s Republics’ of Donetsk and Luhansk, which have since been recognized as independent by Russia

Arakhamia did note one area of progress in the latest talks, saying their “only achievement” so far was the creation of humanitarian corridors to allow civilians to flee fighting in major cities, citing the southeastern town of Mariupol as “one of the hottest spots.” However, the corridor plan in Mariupol appears to have already collapsed, with both sides blaming each other for violating the deal.

US Home Price Growth Slowed In June – Weakest In 13 Months