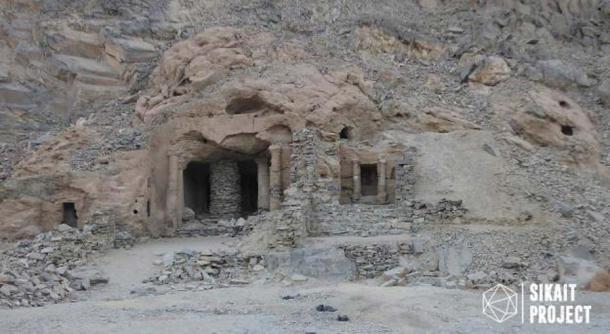 Top image: The Egyptian emeralds would have looked this these (from Brazil) when taken from the ground.

A topographic scan of emerald mines in Egypt’s Eastern Desert has revealed scores of time locked chambers, tunnels and sacred spaces dating to the Graeco-Roman and Byzantine periods.

Emerald mines produce green emeralds, the mystical transparent green variety of beryl, which was one of the ancient god stones of the ancient world associated with the transference of divine powers. While the stone was highly valued by elite Romans, it was equally as valuable to nomadic Blemmyes, according to new research.

The Blemmyes were an Eastern Desert people who existed during the 7th century BC until the 8th century AD. In the late 4th century, they occupied Lower Nubia.

The Egyptian Eastern Desert ruins of Wadi Sikait are the Roman ruins of the Sikait Roman emerald mines.

Eleven New Sites Have Been Found at the Sikait Emerald Mines

UAB lecturer professor Joan Oller Guzmán has published a new study revealing the findings of excavations conducted between 2020 and 2021 at the Roman site of Sikait, within the Wadi Sikait archaeological site in Wadi el Gemal National Park in Egypt’s Eastern Desert. The study was carried out with researchers from the Polish Centre of Mediterranean Archaeology of the University of Warsaw, Poland.

A new paper details how the research team found evidence of “funerary rites and the social organisation of local workers.” However, this all resulted from a new topographic scan of the emerald mines and a formal study of the miner’s extraction and recording methods during the Roman period. The survey scanned as deep as 40 meters (131 feet) below the surface revealing the presence of “small settlements, necropolises, ramps, paths, working areas and watchtowers.” In total, the scan revealed “eleven new archaeological areas.” Holes in the hills like this one are evidence of the extensive ancient emerald mines of Roman Sikait in Egypt.

The Roman Empire’s Only Emerald Mine

Evidence was found that suggests the impressive Tripartite Building was a residence and a warehouse for storing the emeralds. Furthermore, the Large Temple, which is the main temple of Sikait, includes two ritual spaces which were last used between 4th and 5th centuries AD during Blemmyes rule in the region.

According to Eurekalert, Joan Oller Guzmán said the new findings “confirms the relevance of religion and local rituals in this late period. Moreover, the exploitation of the mines may have fallen into the hands of the Blemmyes during this time, “before the fall of the Roman empire.” And the study shows that during the 4th to the 6th centuries AD some of the mine buildings were built by the Excavations at the Roman emerald mines at Sikait in the Eastern Desert of Egypt have revealed more about the mines and the nomadic people who took them over before the fall of the Western Roman Empire.Blemmyes people.

Excavations at the Roman emerald mines at Sikait in the Eastern Desert of Egypt have revealed more about the mines and the nomadic people who took them over before the fall of the Western Roman Empire.

First Topography of the Ancient Mines

A rare collection of ancient inscriptions provided the archaeologists with information on who worked at the mines and how the extraction processes all hung together. Oller explained that one particular inscription created by a Roman legion demonstrates that the Roman army was directly involved in the exploitation of Egypt’s emerald mines, “not only to defend them, but also probably to help in their construction.

On top of identifying dozens of new mining settlements and extraction infrastructures, the team of researchers also identified a hitherto unknown 100-tomb necropolis loaded with evidence of ancient funerary rites. The new discoveries have given archaeologists new insights into the ancient community who lived at the mining site shortly before the site was abandoned.

In January of this year the archaeological team excavated the Small Temple in which a Greek inscription in honor of the gods was discovered.

All in all, what all this new research represents is a major leap forward in the scientific understanding of how emeralds were extracted and commercialized in the Graeco-Roman and Byzantine periods.

The Left’s Big Pitch: Embrace A Worse Life In The Name Of Equality