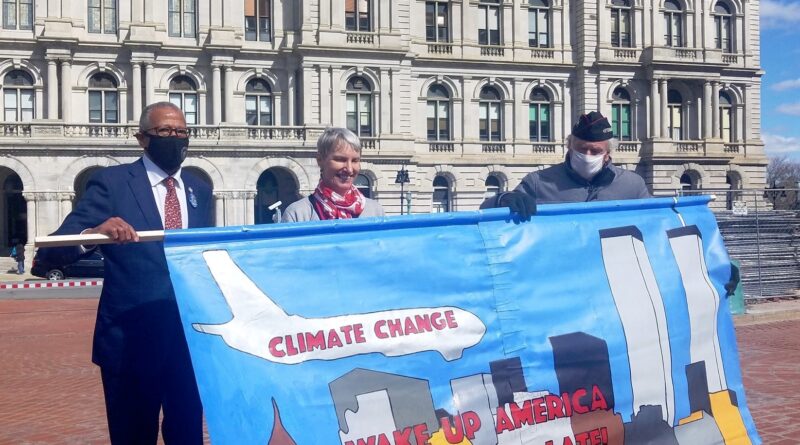 A “Climate Justice” rally hosted in Albany by the left-wing organization NY Renews on Tuesday was billed as “a day to remember” by organizers who hoped to “flood the streets of Albany to demand $15 billion for climate, jobs, and justice.” [bold, links added]

But what may be remembered, rather than what appeared to be far less than a “flood” of climate alarmists, is one sign that was present at the gathering.

Yes, that is “climate change” depicted as a plane headed for the Twin Towers of the World Trade Center, which stood in lower Manhattan until they were destroyed by Muslim extremist terrorists who flew planes into the towers on September 11, 2001. “Wake Up America,” indeed.

Several lawmakers here to speak as they await more detail in conference about what’s in their one houses… pic.twitter.com/p5WZ6TYPpt

Even worse than someone making such a banner, two of the individuals in the caught-on-camera moment are Democrat New York State Senators — who apparently have very short memories or horrible judgment, or both.

New York Senate Republican Leader Bob Ortt identified Democrat State Senators Rachel May and Robert Jackson as two of the individuals posing with the banner. In Senator May’s case, smiling, as she violated the rally organizers’ stated requirement that everyone “be fully vaccinated and masked.”

This shameful use of 9/11 imagery offends every New Yorker.

My colleagues @SRachelMay and @SenatorRJackson are using a horrific attack on our Nation to advance their political agenda.

Do these people really think one of the darkest days in the history of New York State and the United States is on the same level with climate change?

Unfortunately, many do — thanks to the nation’s leaders including jet-setting Climate Czar John Kerry, members of The Squad, and Senator Bernie Sanders and his ilk.

Warnings of just a decade left to save the planet, declarations from the highest levels of the Biden administration that climate change is the greatest national security threat America faces, and other excessive hyperbole have convinced many Democrats that climate change poses a greater threat than fanatical terrorists.

As Townhall reported on Monday, a new poll out from Gallup showed that 83 percent of Democrats surveyed reported “global warming” as the biggest critical threat to U.S. vital interests — more than who said Iran’s nukes, international terrorism, domestic terrorism, or the military of China and Russia were critical threats.

To some small credit, organizers of the rally condemned the tasteless banner (and what choice did they have?) while claiming they did not invite or sanction such imagery and asked its creator to leave.

Nevertheless, this is emblematic of the climate alarmism crowd’s detachment from reality and how far Democrat lawmakers are willing to go in their attempts to force the left’s radical climate agenda on New Yorkers and the American people.

Open Letter to the Prime Minister of New Zealand, by Peter J. Morgan: “It is no longer possible for any credible argument to be made that ‘the science is settled'” 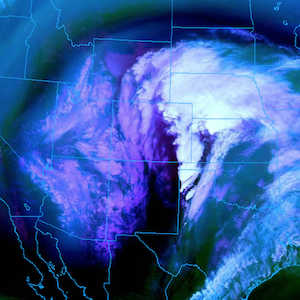