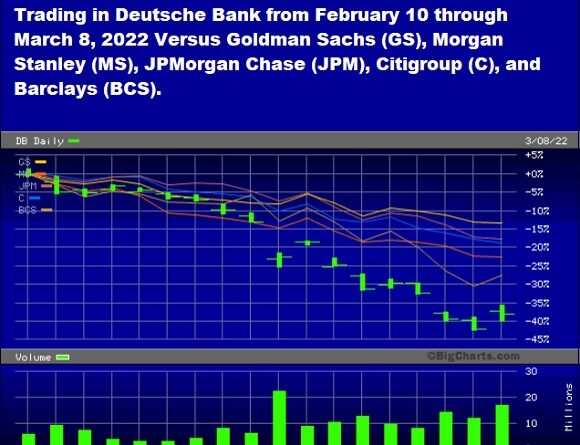 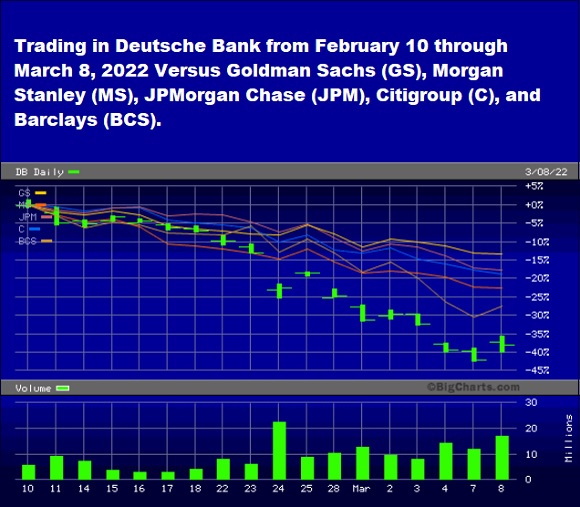 Deutsche Bank (symbol DB on the above chart) closed at $16.50 on the New York Stock Exchange on February 10 of this year. It closed at $10.23 yesterday – a decline of 38 percent in a month’s time. That’s a big problem because Deutsche Bank is heavily interconnected to Wall Street banks via derivatives. According to Deutsche Bank’s most recent annual report, as of December 31, 2020, it held $35.4 trillion in notional derivatives. (Notional means face amount. See the table on page 147 of the 2020 Deutsche Bank Annual Report here.)

Deutsche Bank, a large German bank, was among the global banks bailed out by the Fed during the financial crash of 2008 as well as during the (still unexplained) liquidity crash that saw the Fed pump trillions of dollars in cumulative loans into global banks from September 17, 2019 through July 2, 2020.

In June 2016, The International Monetary Fund (IMF) released a report with a finding that Deutsche Bank posed the greatest threat to global financial stability than any other bank because of its interconnections to Wall Street mega banks and large banks in Europe. (See graph below.) The largest bank in the United States, JPMorgan Chase, was shown as one of the banks with the largest amount of exposure.

Despite that finding by the IMF in 2016, Deutsche Bank has been allowed by regulators in Europe and the U.S. to continue engaging in high-risk Over-the-Counter derivatives. It also has an uncomfortable history of suicides and rogue behavior. See a sampling of its history since 2014 below.

Yes, President Joe Biden’s administration has a lot on its plate. But if it doesn’t get serious about reforming Wall Street and its derivative weapons of mass destruction, it will have a lot more to deal with eventually.

Systemic Risk Among Deutsche Bank and Global Systemically Important Banks (Source: IMF — “The blue, purple and green nodes denote European, US and Asian banks, respectively. The thickness of the arrows capture total linkages (both inward and outward), and the arrow captures the direction of net spillover. The size of the nodes reflects asset size.”)

January 26, 2014: William Broeksmit, 58, was found hanged in his London home. Police ruled the death “non-suspicious.” Broeksmit was a senior executive at Deutsche Bank involved in assessing risk on the bank’s balance sheet. (See Documents Emerge in Senate Hearing from William Broeksmit, Deutsche Exec Alleged to Have Hanged Himself in January.)

October 20, 2014: The body of Calogero Gambino, 41, was found by his wife hanging from a stairway banister in their Manhattan home. Gambino was a lawyer for Deutsche Bank who had been cooperating with U.S. regulators on Deutsche Bank’s involvement in the rigging of the interest rate benchmark, Libor.

April 23, 2015: Deutsche Bank pleads guilty to the U.S. Department of Justice for its role in rigging the benchmark interest rate known as Libor. It pays fines of $2.519 billion to various regulators.

January 17, 2017: Deutsche Bank reaches a settlement with the U.S. Department of Justice in which it agrees to pay $7.2 billion in fines and restitution for its improper “packaging, securitization, marketing, sale and issuance of residential mortgage-backed securities (RMBS) between 2006 and 2007.”

January 30, 2017: Deutsche Bank is fined a total of $630 million by U.S. and U.K. regulators over claims it laundered upwards of $10 billion on behalf of Russian investors.

January 29, 2018: Deutsche Bank is ordered to pay $30 million by the Commodity Futures Trading Commission for manipulating trading in the precious metals market.

May 19, 2019: The New York Times’ David Enrich writes the bombshell report describing how a Deutsche Bank whistleblower, Tammy McFadden, and four of her colleagues, had their efforts blocked by the bank when they tried to file suspicious activity reports on bank accounts affiliated with Donald Trump and his son-in-law/advisor Jared Kushner. The suspicious activity reports (SARs) should have been filed with the Federal agency known as FinCEN (Financial Crimes Enforcement Network) but were quashed by a unit of the bank that manages money for the super wealthy.

July 7, 2019: Deutsche Bank confirms plans to fire 18,000 workers and reorganize into a good bank/bad bank. The bad bank will hold assets it plans to sell.

September 24, 2019: German police raid Deutsche Bank headquarters for the second time in less than a year.

November 8, 2019: Nomura and Deutsche Bank, along with numerous employees, were convicted in a trial in Italy for helping the Tuscan bank, Monte dei Paschi di Siena, commit fraud in derivatives deals to help it hide losses.

Biden in Poland, tells US troops to prepare for Ukraine, calls for regime change in Russia. Update 1

ALERT!! Gold/Silver Ratio ROCKETS to 95-1! SWAP ALL YOUR GOLD FOR SILVER!! (Bix Weir) 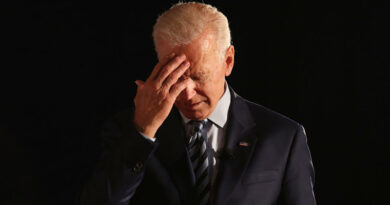 Yikes: A THIRD Of Democrat Voters Want To Impeach Biden