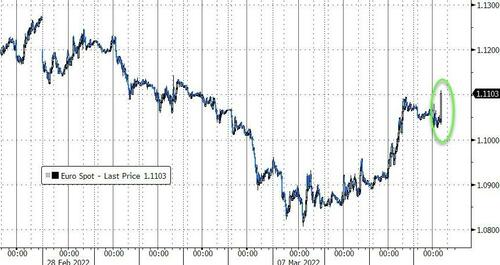 With expectations set low for any actual market-moving announcements, today’s ECB statement was expected to be more about buying time before big decisions than actual decisions, with the economic forecasts underpinning its decision-making likely to be subject to greater uncertainty than normal due to Russia sanctions fallout.

However, it appears The ECB was in more of a hurry than expected to normalize and fight inflation and did not use the escalating conflict as an excuse, rather it accelerated the end of its bond-buying program (APP).

Based on its updated assessment and taking into account the uncertain environment, the Governing Council today revised the purchase schedule for its APP for the coming months. Monthly net purchases under the APP will amount to €40 billion in April, €30 billion in May and €20 billion in June. The calibration of net purchases for the third quarter will be data-dependent and reflect its evolving assessment of the outlook

The Governing Council also dropped wording that suggested interest rates could go “lower” than the present level, and said that any changes in borrowing costs will take place “some time after” the end of net bond purchases, and will be “gradual.”

Additionally, the ECB says that it will take whatever action is needed to fulfil mandate.

This was a packed statement. Here are the main headlines:

The statement is overall on the hawkish side as it also drops wording that it could lower rates in the future.

Additionally, in response to the war, the ECB is also extending a facility to provide euros to peers outside of the euro area.

The aim is to provide a “comprehensive set of backstop facilities” to avert distress that could upset the transmission of ECB policy.

As we detailed earlier, the conflict in Ukraine had dominated the hawkish shift signaled by Lagarde in February and following Powell’s lead to some extent (where he jawboned expectations for a March hike down from 50bps to 25bps), but after the biggest surge since April 2020 yesterday, the euro was leaking lower ahead of the ECB statement and then spiked higher on the surprise acceleration in ending APP…

And sovereign yields spiked with Italian 10Y up 24bps!

The press conference will offer Lagarde more opportunity to show how ‘flexible’ the ECB will be – whether she will build on this statement’s hawkishness or try and jawbone it back.

Read the full statement below:

The Russian invasion of Ukraine is a watershed for Europe. The Governing Council expresses its full support to the people of Ukraine. It will ensure smooth liquidity conditions and implement the sanctions decided by the European Union and European governments. The Governing Council will take whatever action is needed to fulfil the ECB’s mandate to pursue price stability and to safeguard financial stability.

Based on its updated assessment and taking into account the uncertain environment, the Governing Council today revised the purchase schedule for its APP for the coming months. Monthly net purchases under the APP will amount to €40 billion in April, €30 billion in May and €20 billion in June. The calibration of net purchases for the third quarter will be data-dependent and reflect its evolving assessment of the outlook. If the incoming data support the expectation that the medium-term inflation outlook will not weaken even after the end of our net asset purchases, the Governing Council will conclude net purchases under the APP in the third quarter. If the medium term inflation outlook changes and if financing conditions become inconsistent with further progress towards our two per cent target, we stand ready to revise our schedule for net asset purchases in terms of size and/or duration.

The Governing Council also intends to continue reinvesting, in full, the principal payments from maturing securities purchased under the APP for an extended period of time past the date when it starts raising the key ECB interest rates and, in any case, for as long as necessary to maintain favourable liquidity conditions and an ample degree of monetary accommodation.

The interest rate on the main refinancing operations and the interest rates on the marginal lending facility and the deposit facility will remain unchanged at 0.00%, 0.25% and -0.50% respectively.

The Governing Council intends to reinvest the principal payments from maturing securities purchased under the PEPP until at least the end of 2024. In any case, the future roll-off of the PEPP portfolio will be managed to avoid interference with the appropriate monetary policy stance.

The pandemic has shown that, under stressed conditions, flexibility in the design and conduct of asset purchases has helped to counter the impaired transmission of monetary policy and made the Governing Council’s efforts to achieve its goal more effective. Within the Governing Council’s mandate, under stressed conditions, flexibility will remain an element of monetary policy whenever threats to monetary policy transmission jeopardise the attainment of price stability. In particular, in the event of renewed market fragmentation related to the pandemic, PEPP reinvestments can be adjusted flexibly across time, asset classes and jurisdictions at any time. This could include purchasing bonds issued by the Hellenic Republic over and above rollovers of redemptions in order to avoid an interruption of purchases in that jurisdiction, which could impair the transmission of monetary policy to the Greek economy while it is still recovering from the fallout from the pandemic. Net purchases under the PEPP could also be resumed, if necessary, to counter negative shocks related to the pandemic.

The Governing Council will continue to monitor bank funding conditions and ensure that the maturing of operations under the third series of targeted longer-term refinancing operations (TLTRO III) does not hamper the smooth transmission of its monetary policy. The Governing Council will also regularly assess how targeted lending operations are contributing to its monetary policy stance. As announced, it expects the special conditions applicable under TLTRO III to end in June this year. The Governing Council will also assess the appropriate calibration of its two-tier system for reserve remuneration so that the negative interest rate policy does not limit banks’ intermediation capacity in an environment of ample excess liquidity.

In view of the highly uncertain environment caused by the Russian invasion of Ukraine and the risk of regional spillovers that could adversely affect euro area financial markets, the Governing Council decided to extend the Eurosystem repo facility for central banks (EUREP) until 15 January 2023. EUREP will therefore continue to complement the regular euro liquidity-providing arrangements for non-euro area central banks. Together, these form a comprehensive set of backstop facilities to address possible euro liquidity needs in the event of market dysfunctions outside the euro area that could adversely affect the smooth transmission of the ECB’s monetary policy. Requests from non-euro area central banks for individual euro liquidity lines will be assessed by the Governing Council on a case-by-case basis.
***
The Governing Council stands ready to adjust all of its instruments, as appropriate, to ensure that inflation stabilises at its 2% target over the medium term.
The President of the ECB will comment on the considerations underlying these decisions at a press conference starting at 14:30 CET today. 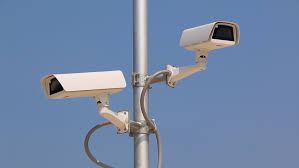