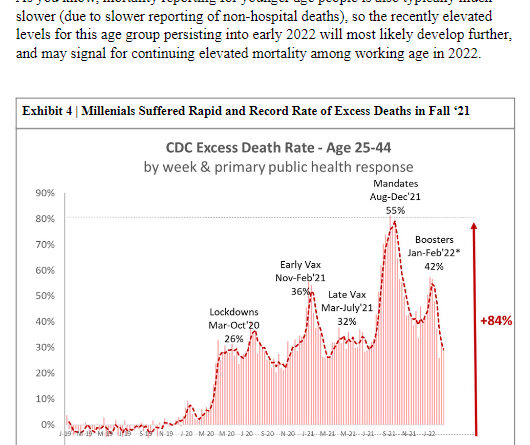 Fresh off a 7-day suspension from Twitter, BlackRock Whistleblower, Ed Dowd is back, with a horrifying report on Steve Bannon’s War Room.

Ed enlisted the help of an insurance industry expert to parse out the CDC Excess Deaths data. He says, “We were looking for other things but what we found was pretty shocking…He broke it down by age and he created a baselines for each age group to come up with excess mortality.

“And the money chart is really Chart 4, which shows that the Millennial age group, 25 to 44 experienced an 84% increase in excess mortality into the fall. It’s the worst-ever excess mortality, I think, in history.

Millennials actually saw the highest rate of excess deaths from the baseline of any group, 7 times higher than the Silent Generation, (those aged 85+), due to the mandates imposed upon them in order to keep their jobs.

“Just to give you an idea, when you look at Chart 4, you see when mandates and boosters hit, the acceleration into the fall and then it re-accelerated into the end of the year. The drop-off in that data we see there is reporting issues. It takes time for Millennial-aged deaths to be reported, because they’re usually not hospital deaths, so that data’s going to be updated and it’s probably gonna show that continued disturbing trend.

“I think this is the smoking gun: that the vaccines are causing excess mortality in all age groups and it’s no coincidence that Rochelle Walensky refuses to answer Sen. Ron Johnson’s letters. They’re hiding. Fauci’s gone. She’s gone. They’re hiding.

“So, I’m going to put a word out there. It’s an old word but it should be re-introduced into the conversation. It’s called democide: Death by government. So the government, through the mandates has killed people.”

Ed says that his insurance expert is taking this report to an investor group and through them, his identity will be made public. He also says that a senior risk officer reached out to him and he wants to compare notes, so he thinks this is only the beginning of the response from the financial community.

Dowd does not see the liability protections afforded by the US Government to vaccine manufacturers protecting them, this time.

He says, “I’ve done a lot of work into the clinical data with [Ventavia whistleblower] Brook Jackson on the prima facie evidence that the FDA wanted to hide. The data for 75 years points to clinical fraud. There’s also problems with the manufacturing process. It’s all coming out. This is the most ridiculous disaster in the history of the Nation that I’ve ever seen – with government cover-up.”

On his GETTR account, Dowd is posting the tables for the other age groups. For example, the excess mortality rate for the GenX cohort, aged 45 to 64 also shows a clear early-fall mortality spike, consistent with that of the Millennials, with 101,000 excess deaths since Aug 2021.

He was also asked about his general predictions for the economy, with Thursday’s announcement of a 7.9% rise in inflation last month. The Democrats, of course are chalking this up to “corporate greed” but Ed predicts a recession in the Third Quarter or certainly before the end of this year.

He says, “Bottom line, according to some analysis I’ve seen, the Fed is trapped. The rate hike cycle’s already over before it began. We’re at the end of the Ponzi scheme, so to speak [i.e., the Federal Reserve Note] and we’re at a very critical point in history, where a lot of the inflation over the last ten years went into assets and now, we’re going to see inflation in things we need and deflation in those assets. So, it’s a one-two punch – and that’s coming.

“We also have what I see as supply shocks that are different from monetary influences. This is the first spike in commodity prices since ’83 that we’ve seen without a corresponding rise in interest rates. So, this is supply shock-driven, so it’s gonna be a disaster over the next 12 months, in my humble opinion.”

THE LARGEST DECEPTION EVER? TRACING THE HISTORY OF THE “SAFE & EFFECTIVE” VACCINES LIE 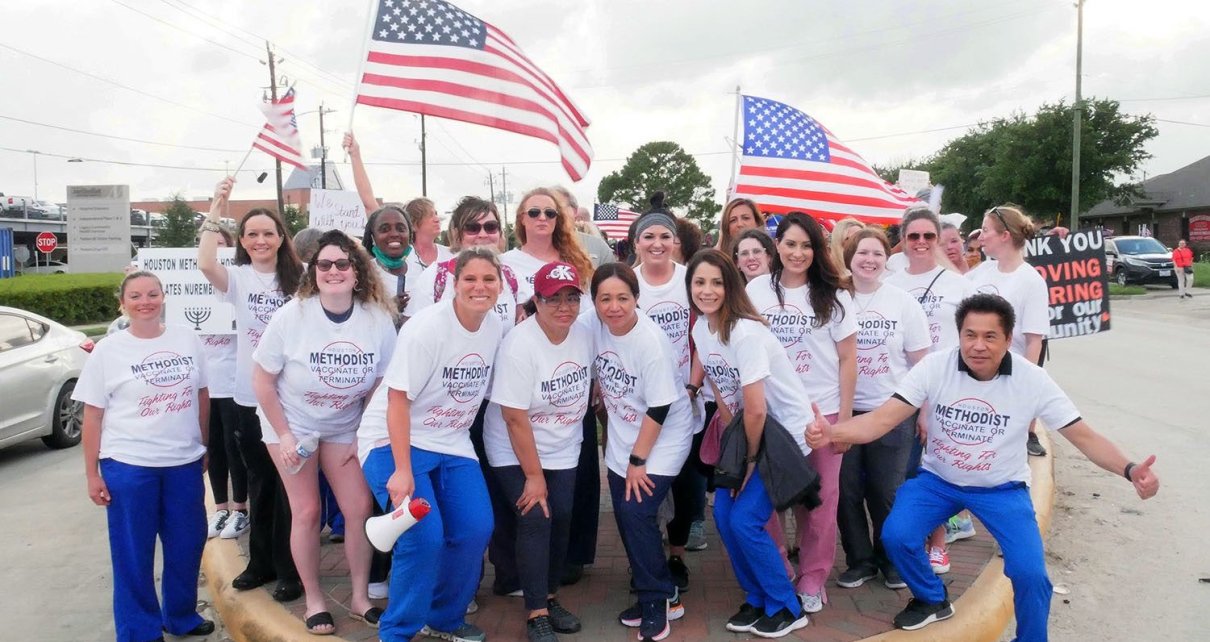