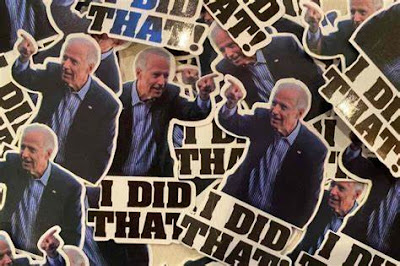 I saw “Get ready for some serious pain” warning in the comment section, and since as I was browsing news and thinking close to the same thing, I decided to use it in the headline, because what we are witnessing is but the beginning of the Biden regime lighting our nation on fire.

Food shortages during the pandemic lockdowns, with reader submitted images of bare shelves ? Pfffft, those are going to look like well stocked shelves soon in comparison to what we are going to see.

Inflation was out of control even before the Russia/Ukraine war, and now it is rising exponentially, with the Biden regime using the situation to pretend the conflict is the cause.

Apparently just because Biden cannot remember the sequence of events, the MSM and Democrats think Americans shouldn’t either.

After all, Biden is convinced that Russia invaded…… Russia? Yup, he did that.

“How did we get to the place where, you know, Putin decides he’s gonna just invade Russia? Nothing like this has happened since World War II.” – Joe Biden

Not only did he say that which caught a lot of attention, but another  example which garnered less attention is when he stated that Russia was “indiscriminately firing missiles into Russia cities.”

Listen for yourself, both clips are in the short clip below.

Gas prices and food prices, also part of that inflation, not only have seen increases for the past two years, but it is being acknowledged now by experts that they have no idea if or when the pain will lessen, with many positive that the damage will continue to get worse, at the pumps, and at the grocery stores.

A new daily index released on Tuesday by the London-based ICE Benchmark Administration (IBA) showed the expected pace of consumer price increases over the next year rising from 3.5% on Feb. 1 to 5.24% as of March 7. The index is based on trading in the roughly $300 billion monthly market for inflation-protected U.S. Treasury securities and in the $100 billion monthly market for inflation swaps contracts.

Inflation anticipated over longer 10- and six-year horizons has also turned abruptly higher since the onset of the Ukraine war, with rates as of Monday around 2.43% and 2.73%, respectively, significantly above the Fed’s 2% annual price increase target, the index shows.

BIDEN IS BLOWING UP AMERICA

Joe Biden gave a speech on Tuesday, or rather muttered a bunch of lies, about the rising gas prices being everyone’s fault except the Biden regime’s policies, when it is common knowledge that Biden himself, in less than a year, managed to turn our nation from being energy independent for the first time in  70 years, to depending on energy/oil from other nations.

FACT: Biden killed the Keystone Pipeline on day one of his White House occupation.

Joe Biden, or his handlers did that.

Then we see things like the article promo below,  showing that the average gas price is high, but as the images prove, in some places we see how much worse it can, and likely will get. 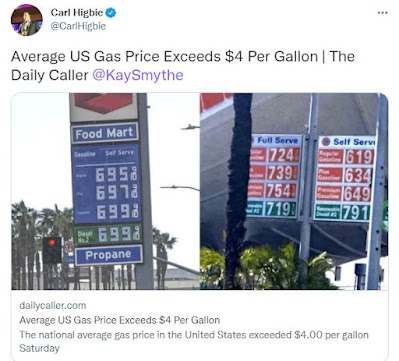 As Summit News pointed out, the prices shown above are even higher than the Zombie Apocalypse movie “I am Legend” predicted they would get right before the end of the world as we know it.

As the images hit social media, people began to point out that the prices are higher than was predicted in the 2007 disaster movie I am Legend, which suggested prices would reach almost $7 before society completely collapsed due to a rage zombie-type plague outbreak.

According to a CBS News article on March 7, 2022, the rising gas prices are already costing families $2,000 a year, and was before Biden’s March 8, 2022 speech announcing we would no longer be importing any oil from Russia.

While I see both RINOs (Republicans In Name Only) and Democrats insist on “punishing” Russia for the war in Ukraine, when America would be better off just minding  its own business, and focus on  helping Americans rather than making the inflation-related pain even worse.

The aforementioned politicians are betting that Americans will come together and willingly bear the brunt of the pain because “WAR,” what they are ignoring is that America is not at war, yet the Biden regime is trying to convince the populace that they are somehow obligated to suffer for a war we should have no part in.