The Fed took an unprecedented as well as illegal action on Russia that constitutes economic warfare and may easily start a currency crisis or something even worse.

The Fed, likely acting on orders from the Biden administration, froze the US dollar reserve assets of Russia.

Some may cheer this others not, but perhaps by the time I finish this post, those cheering now may have second thoughts.

Click on the link for the complete act. Nowhere does the act give the Fed the right or power to confiscate the reserves of sovereign nations.

But that is exactly what the Fed did.

In one quick order the Fed electronically rendered Russia’s foreign dollar reserves worthless, or at least unusable for now.

Did the Fed Do This On Its Own?

More likely, the Fed was pressured by the Biden administration because of huge holes in SWIFT.

In So Many Holes in SWIFT Sanctions on Russia, those Sanctions are Useless I inadvertently described SWIFT as an international payment system. That’s incorrect.

SWIFT does not send or process payments. Through SWIFT, one communicates money that is about to be sent, who gets credited, etc. The actual money is transferred between banks.

When the US prohibited Russia from using SWIFT there were ways around it. Banks were reluctant to use those ways out of fear of sanctions.

Then the Fed stepped in and said Hello Russia all of your $$$ assets are frozen.

Russia could not even pay creditors money it owed them. Some people cheered this event, but European and US creditors who just got defaulted on certainly didn’t.

The amount was small, but what’s the global message?

Hello China, We Can Do This To You Too!

The Fed just gave China a big advance warning about what reserves to hold.

And what about Senator Marco Rubio?

CIPS is outside of the Fed’s reach and Rubio doesn’t like it.

Now, if you were in China’s shoes do you hold dollars or gold as reserves? What about metals? 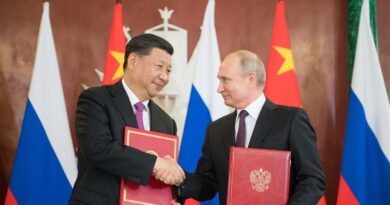