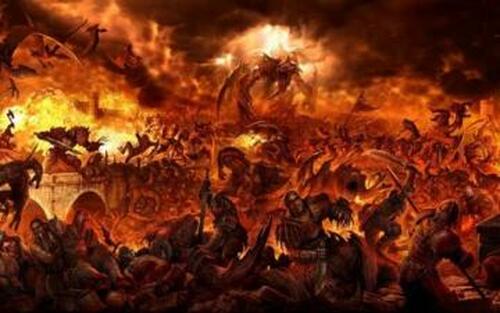 When the sh-t hits the global fan, it often does it at the optimal time for the maximum amount of damage and with the worst kind of sh-t to soil the world.

For years I have been clear that the world is reaching the end of an economic, financial and monetary era which will affect mankind catastrophically for decades.

The world will obviously blame Putin for the catastrophe which will hit every corner of our planet. But we must remember that neither Putin nor Covid is the reason for the economic cataclysm that we are now approaching.

These events are catalysts which will have a major effect because they are hitting a gigantic debt bubble of a magnitude that has never been seen before in history. And it obviously takes very little to prick this epic bubble.

What is unequivocal is that all currencies will finish the 100+ year fall to ZERO in the next few years. It is also crystal clear that all the asset bubbles – stocks, bonds and property – will implode at the same time leading to a long and deep depression.

So as is often typical for the end of an economic era, the catalyst is totally unexpected and worse than anyone could have forecast.

Yes, I and a few others have pointed out that we are in a war cycle currently, and recent events have clearly confirmed this and hit the world with a vengeance.

Just as nobody paid any serious attention to the warning that the Great Financial Crisis in 2006-9 gave the world, few people have taken Putin’s warnings seriously since the 2014 Maidan revolution in Ukraine.

When sh-t happens at the end of an excessive bubble era, it will always be the worst kind. And what can be worse than a major war that could develop into a nuclear and world war.

Sadly, wars are part of history and there is virtually no period in history without a war. Wikipedia lists around 40 ongoing wars and conflicts currently with most of them being relatively small and local. The majority are in the Middle East and Africa.

Wars are horrible at any level and Russia’s invasion of Ukraine certainly qualifies as another grim conflict that potentially could have been avoided. In the US backed Maidan Revolution in Ukraine in 2014, the Russian friendly Ukrainian President Yanukovych was pushed out. Since then, Putin has always made it clear that he could not accept being surrounded by a US and Western backed Ukraine as well as Nato members with missile systems pointing to Russia. The parallel with Cuba, Kennedy and Khrushchev in 1962 is obvious.

Whether anyone listened to Putin’s demands or not, he made it very clear that he could never let Russia be cornered in this manner. If the US and the West had focused more on critical diplomacy for the sake of global peace, things could have been different. But instead, all Western world leaders found nebulous and uncontroversial areas to agree on such as Covid, climate change, wokeism, rewriting history and creating unlimited genders.

Leaders also deliberately ignored the fact that the world was going towards an inevitable economic debt and asset collapse. Much easier to rearrange the deck chairs than to deal with real and emphatically catastrophic issues.

So Putin is now the number one enemy of the Western world since starting a war is always unacceptable whoever starts it. Lindsey Graham, a US Republican senator just suggested that Putin should be taken out! But Boris Johnson fortunately disagreed but  suggested instead that Putin should be held to account at the International (Criminal) Court.

Fair enough, war crimes are always crimes and should therefore be punished.

But what is interesting to observe is that when the US with Allies start unprovoked wars in Vietnam, Iraq, Libya or Syria with hundreds of thousands of innocent victims, destroying the fabric of these societies and also leading to anarchy, no one calls for the US president or UK prime minister to be held to account.

Obviously, the world has never been a level playing field.

THE FED CAN NEVER GET INFLATION RIGHT

Inflation leading to hyperinflation was always guaranteed in the current debt infested era, although the Fed and other Western central banks have never understood what inflation is. Just as they didn’t understand that their fake and manipulated inflation figures couldn’t even reach the Fed target of 2%. Now with real US inflation exceeding 15% (see graph below), the Fed has a new dilemma that they are totally unprepared for.

The US government conveniently changed the calculation of inflation to suit their purpose. Had they stuck to the 1980s established method, official inflation would be over 15% today and rising.

For years, the US Fed unsuccessfully tried, with all the king’s horses and all the king’s men, to get inflation up to 2%. In spite of throwing $ trillions at the problem and keeping interest rates at zero, they never understood why they failed.

In spite of printing unlimited amounts of counterfeit money, inflation for years stayed nearer 0% than 2%.

Now with official inflation at 7% and real at 15%, the Fed can’t understand what has hit them as we know from their laughable “transitory” language.

So now a quick volte face for the Fed to figure out how to reduce inflation by 5 percentage points and more likely by 13 to get inflation down to 2% instead of up to 2%.

Clearly the Fed can never get it right but many of us have known that for a very long time.

If the Fed studied and understood Austrian economics rather than defunct Keynesianism, they would know that the real inflation rate depends on growth in money supply rather than the obsolete consumer price model.

BASED ON THE GROWTH IN MONEY SUPPLY, US INFLATION IS NOW 19%

So let’s take a look at the growth in Money Supply. Since 1971, M2 has grown by 7% annually. A 7% growth means that prices double every 10 years. Thus 100% total inflation over 10 years rather than the 2% per annum that is the Fed target.

But as the chart above shows, the exponential phase started in March 2020 with M2 growing by 19% annually since then. That means a doubling of prices every 3.8 years.

Since money supply is growing at 19% annually, this means that inflation is also 19% based on our Austrian friends.

And this is what the US and the world was facing before the Ukraine crisis. But now there is a lot of explosive fuel being poured on the global inflation fire.

Russia has the biggest natural resource reserves in the world which include coal, natural gas, oil, gold, timber, rare earth metals etc. In Rubles these reserves will obviously appreciate substantially with the falling currency.

In total, the Russian natural resource reserves are estimated at $75 trillion. That is 66% higher than the second country USA and more than twice as much as Saudi Arabia and Canada.

Even if the total Russian supply is not lost to the world, it is clear that the West is determined to punish Russia to the furthest extent possible. Therefore, as we have already seen in the major escalation of oil and gas prices, the shortages will put insufferable pressure on the prices of natural resources.

The table below shows the countries in Europe that are dependent on Russian gas for more than 50% of their total consumption.

A COMMODITY BLACK SWAN IS COMING

The global market for grains, vegetable oil and fertilisers was already extremely tight before Russia’s attack.

What is happening now is a commodity black swan across both energy and agricultural resources.

The World Food Programme warned of a catastrophic scarcity for several hundred million people last November. What is happening now will make this exponentially worse.

“Everything is going up vertically. The whole production chain is under pressure from every side,” said UN’s ex-head of agricultural markets.

Energy and agricultural products are interlinked. Gas is feedstock for fertiliser production in Europe. Russia and Belarus together account for 1/3 of the world’s potash exports.

Around 33% of world exports of barley come from Russia and Ukraine together, 30% of wheat, 20% of maize and 80% of sunflower oil.

The consequences are unforeseeable.

Goldman Sachs Commodity Index is up 3X since April 2020. The exponential phase of  the move has just started.

UN’s Food and Agricultural Organisation (FOA) are reporting a 43% increase in food price since 2020. And remember, this was before the real problems had started.

A GLOBAL MONETARY AND COMMODITY INFERNO

I have for quite a few years warned about the coming inflation, leading to hyperinflation, based on unlimited money printing.

But the dynamite of a global commodity crisis and shortages thrown into the already catastrophic debt and global monetary fire will create an inferno of nuclear proportions.

If a miracle doesn’t stop this war very quickly (which is extremely unlikely), the world will soon be entering a hyperinflationary commodity explosion (think both energy, metals and food) combined with a cataclysmic deflationary asset implosion (think debt, stocks and property).

The world will be experiencing totally unknown consequences without the ability to solve any of them for a very long time.

All the above would most likely happen even without a global war. But if the war spreads outside Russia and Ukraine, then all bets are off. At this point I am not going to speculate about such an outcome since what is standing in front of us currently certainly is bad enough.

IS THERE ANY GOOD NEWS?

So is there any good news? Well, first of all as I often repeat, family and a small group of friends and colleagues will be invaluable in the coming crisis.

And since a commodity inflation is guaranteed, it is obvious that physical gold and some silver will be a life saver against the coming bubble-asset destruction (stocks, bonds, property.

As I have said many times:

In a crisis of this magnitude, I would stay away from paper assets including ETFs of any kind. It is clearly imperative to have physical metals stored outside the financial system.

Just look at what happens to gold when the currency collapses. The chart below shows gold in Rubles since 2000. Gold is up 38X in the last 21 years. Just in the last 12 months, gold is up 89% in Rubles and the problems have just began.

Russia was the world’s second largest gold producer in 2020 with 331 tonnes after China with 368 tonnes.

These two countries have officially accumulated 3,400 tonnes of gold since 2000 giving them a total of 4,200t.

Some insiders estimate that China’s gold reserves could be as high as 20,000t and Russia’s also considerably higher than the 2,300t.

So while Russia and China have increased their combined gold holdings 5X since 2000 The US allegedly has held 8,000 since 1980. But since there has been no official physical audit of the US gold since 1953, few believe that they hold this amount of unencumbered gold.

Remember: “He who holds the gold makes the rules”

Sadly it now looks like the Dark Years are starting in earnest.

Except for protecting your assets against collapsing currencies, I repeat that the circle of family and friends and helping others will be absolutely critical.

Why Won’t The Fed Be Able To Shrink Its Balance Sheet?