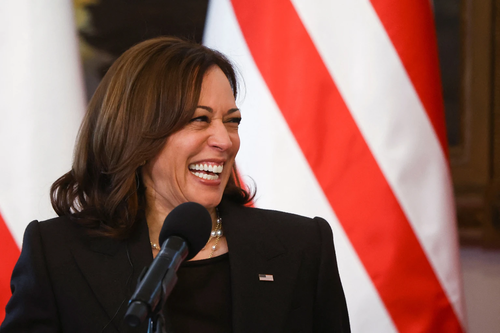 As we predicted earlier, despite Vice President Kamala Harris being dispatched to Poland to try and smooth over the MiG jets for Ukraine fiasco, she only made things more awkward during her joint press conference with Poland’s President Andrzej Duda in Warsaw.

She broke into deep laughter, which perhaps made President Duda visibly uncomfortable given how long the cackle lasted when asked a series of questions about the growing Ukrainian refugee crisis impacting the region. Watch:

The moment was prompted after a reporter posed questions for which she seemed unprepared, after which Harris and Duda looked at each other to determine who would go first.

“It’s an improvised system that can work for maybe two weeks but not indefinitely,” the reporter added before asking, “And I’m wondering what the United States is going to do more specifically to set up a permanent infrastructure and relatedly, is the United States willing to make a specific allocation for Ukrainian refugees?”

“OK,” Harris then said, and proceeded to make a joke, letting loose deep laughter that seemed to continue on for an awkward length of time. One report said it lasted up to 15 seconds.

“A friend in need is a friend indeed,” she said, laughing at her own ‘joke’. The refugee crisis which has emerged after two weeks of war in Ukraine has now been called the worst since World War 2, with the United Nations by middle of this week estimating over 2.4 million Ukrainians have fled amid the Russian invasion.

The New York Post and others assembled some quick reactions, after she was slammed by multiple pundits for the inappropriate moment, considering the gravity and dire nature of the situation:

“Only Kamala Harris would find it appropriate to laugh when talking about the topic of Ukrainian Refugees,” tweeted Benny Johnson of conservative group Turning Point USA.

“Kamala Harris has been very consistent during her live remarks with Poland’s leader,” said former Donald Trump campaign aide George Papadopoulos. “She is awkwardly laughing. Again. Discussing refugees is no laughing matter. Why she laughs at this is deranged.”

“Nothing about any of this is funny,” added Fox News senior meteorologist Janice Dean.

And as The Daily Mail noted, “The vice president’s now commonplace laughter at inappropriate moments with world leaders was met with widespread criticism.”

Fresh numbers in The Wall Street Journal indicate that about 1.4 million Ukrainian refugees are now in Poland alone, with two refugees entering the country every three seconds at this point. 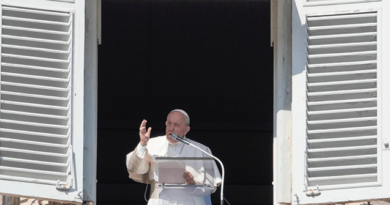