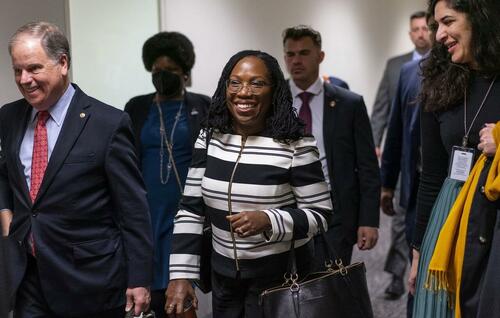 Judge Ketanji Brown Jackson, President Biden’s nominee to succeed Justice Stephen Breyer as he retires from the court, will arrive on Capitol Hill for her first confirmation hearing before the Senate Judiciary Committee starting Monday at 1100ET. Senate Judiciary must vote to confirm her before her nomination can go before the entire Senate for a vote.

In total, her confirmation hearings are expected to last four days. While most political analysts expect her to be confirmed, Republicans have recently raised issues about her judgment with cases involving child predators and pedophiles. Sen. Josh Hawley tweeted about this aspect of her judicial record late last week.

I’ve been researching the record of Judge Ketanji Brown Jackson, reading her opinions, articles, interviews & speeches. I’ve noticed an alarming pattern when it comes to Judge Jackson’s treatment of sex offenders, especially those preying on children

After the four days of hearings conclude, the Senate Judiciary Committee will meet to decide whether to recommend the nomination to the full Senate for a vote. Democrats have a majority on both the committee and in the Senate, and are expected to advance the nomination.

Thanks to the elimination of the filibuster for judicial nominees, Dems only need 51 votes to confirm Jackson. Democrats and the two independents who caucus with them currently hold 50 seats, with Vice President Kamala Harris acting as a tiebreaking vote.

Sens. Joe Manchin and Kyrsten Sinema have occasionally broken from their party on key votes, but they previously supported Judge Jackson’s nomination to the appeals court. They both issued positive statements after meeting Judge Jackson.

Judge Jackson was confirmed to the US District Court in Washington without controversy in 2013 via a voice vote. Last year she was elevated to the US Court of Appeals for the DC Circuit, with three Republicans supporting her nomination. Those three senators – Susan Collins, Lisa Murkowski and Lindsey Graham are key votes to watch. Sen. Graham in particular has spoken out against Jackson’s nomination to the Supreme Court, saying he favored a candidate from his home state of South Carolina, according to WSJ.

After the hearings, the Senate Judiciary Committee will meet to decide whether to recommend her nomination to the full Senate for a vote. The committee vote is technically only a recommendation: the full Senate could still consider a nominee who doesn’t win majority support in the committee.

Back in 1991, the Senate Judiciary Committee was deadlocked 7-7 on whether to recommend Clarence Thomas but voted 13-1 to send his nomination without a recommendation to the Senate, where he was confirmed in a 52-48 vote. Thomas, who was recently hospitalized with an infection, infamously faced allegations from law professor Anita Hill that he sexually harassed her when they worked together. He denied the allegations.

Readers can watch live below:

ShariRaye Collection: There Have Been 50 Assassination Attempts At President Trump! – Must Video 

“End Of An Era”: FedEx Founder Fred Smith To Step Down As CEO