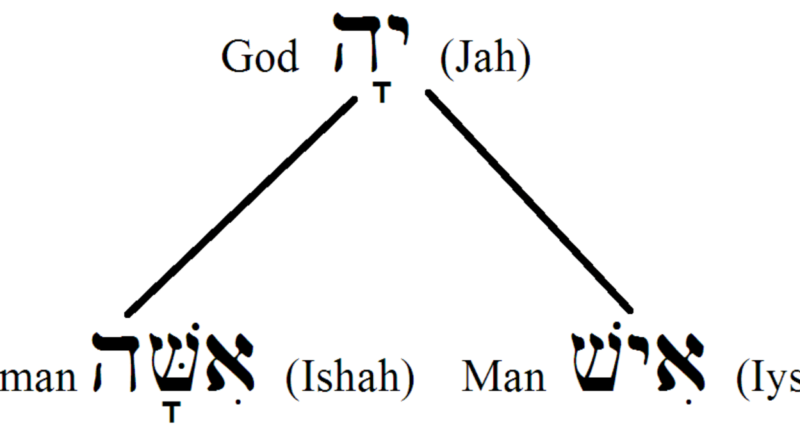 Here is an article that is long overdue. Since this is a hot topic, permit me to start by quoting the majestic words attributed to Voltaire –

‘I disagree with everything you say, but would give my life fighting for you to have the right to say it.’ – Called the Voltairean Principle by Evelyn Beatrice Hall in 1919 – who some erroneously believe invented it. Voltaire died in 1778.

By a concerned reader

He only made two genders. So to exclude God from an attack on his first words in the bible is denying the defendant a voice in his own trial. To find the truth we must consider God’s position on this issue – as unfashionable as that may seem. His position is nicely depicted by the Hebrew language itself as follows.

The Hebrew word for Man has the Yod (J or Y) from Jah and the Hebrew word for woman has the Qametz and the Hey (ah) from Jah or Yah. Other than that, both words are the same. So men have the male characteristics of God and women have the female characteristics of God, who is not genderless, but gender balanced being fully male and fully female and imparting those two complimentary characteristics into men and women. If we two can cooperate together, by combining in love, then we both can get God’s view more closely. Yet God describes himself as the father of Jesus and the father of Adam, not as their mother. So he is certainly male.

This is interesting because one of the Alphabet groups, the Pansexuals, represent that they do not see gender, but just see the spirit of the person. They attempt to be gender free. But that is actually as far away from God as it is possible to be in gender terms. One can argue that the work of a man is to learn femininity whilst retaining masculinity and the work of a woman is to learn masculinity whilst retaining femininity, not to give up on both of them and ghost or cancel gender..

What is a man and what is a woman?

21 And the LORD God caused a deep sleep to fall upon Adam, and he slept: and he took one of his ribs, and closed up the flesh instead thereof;
22 And the rib, which the LORD God had taken from man, made he a woman, and brought her unto the man.
23 And Adam said, This [is] now bone of my bones, and flesh of my flesh: she shall be called Woman, because she was taken out of Man.
24 Therefore shall a man leave his father and his mother, and shall cleave unto his wife: and they shall be one flesh. (Genesis 2 KJV)

So genetically a woman can be made from a man by copying his X chromosome. Whereas a man cannot be made from a woman because she does not have a Y chromosome. Men have all of the genetic material of women. But women do not have all of the genetic material of men. And there is one genetic rib, one Chromosome only, which makes the difference between a man and a woman genetically. This was not known to Moses of course.

So God removed the Y chromosome from Adam and closed up his flesh, in the sense that, said Y chromosome-ectomy was the end of the operation to create a woman from a man. Remove the Y Chromosome (and program the X Chromosome to double itself) and Job done. Nothing more was added to the woman, that was not already in the man. Only today, with modern genetics, can we understand what Moses wrote under inspiration 3500 years ago.

Indeed Adam called his companion Ishah: because from ish she was taken. So Ishah means “from man” or “out of man” in Hebrew. Although I have never seen any Hebrew lexicon which explicitly says so. They all just say ishah means woman, wife, etc.

So this makes it very easy to define what a woman is. She is a human without a Y chromosome. She is the result of building a human without the one genetic building block that God removed from Adam.

Things get a bit more interesting when people have Kleinfelter Syndrome (XXY, or XXXY, or XXXXY chromosomes). The incidence of XXY is 1 in 500, XXXY is 1 in 50,000, XXXXY is 1 in 85,000 to 100,000 https://www.nichd.nih.gov/health/topics/klinefelter/conditioninfo/risk

But applying the definition above, all who have Kleinfelter Syndrome are genetically men.

Can a female spirit find itself in a male body or vice versa?

This is the dilemma that Transsexuals face. In order to answer the question we first have to understand what a human is and how gender manifests itself in mankind.

Human bodies are biological hardware. The human spirit, is a DI or an NI, a Divine Intelligence (if you believe in God) or a Natural Intelligence (if you don’t). This is in contradistinction to an AI, which is an artificial intelligence, created by man. DI/NI and AI are all software operating systems which run on hardware. AI is computer code which runs on electronic computers and NI/DI is the self learning human operating system (divine code or natural code) which runs on the biological hardware of the human brain. Elon Musk is presently attempting to bridge the gap between these two forms of intelligence. That is effectively a brain hack. The result could be worse than Moderna’s gene hack vaccine.

Don’t get me wrong. I think he is a fantastic mechanical and electrical and electronic and hardware and software engineer, a superb visionary. But what the world needs now, is not engineering, it is sustainable morality. Hence this article..

A study by Nirao Shah, MBBS, PhD, professor of psychiatry and behavioural sciences and of neurobiology at Stanford, found over 1,000 gene-activation differences between female and male mice’s brains, plus more than 600 between females in different stages of their reproductive cycle – https://med.stanford.edu/news/all-news/2022/01/mice-gene-activation-brain-sex-differences.html

So male and female mammalian brain hardware have substantial differences. There are 5 main differences between the sexes that we now address.

Yes. Your spirit, your DI/NI operating system, the thing that God blew into your nostrils (in bible symbolism) mid term during your mother’s pregnancy just after the neural connections were fully established between the two halves of your brain, is gendered. and it runs on your gendered brain in your gendered body. It is this spirit that makes you human, and gives you human rights. The spirit is ‘you’.

In sci-fi films, actors portray the effect of a man’s spirit going into a woman’s body, or indeed Arnie’s spirit having a fight with Satan for his body in End of Days. So we do understand the idea that spirits run on bodies just as operating systems run on computers. Now if the hardware is gendered then the software could also be gendered. Indeed Dr John Gray’s book: Men and from Mars Women are from Venus, examines the differences in behaviour between men and women which are so substantial as to be unlikely to be entirely hardware related.

Question: Is the spirit male or female from the start? Is the DI/NI gendered before it runs or does the body make it so?
Answer: It does not matter. After a spirit has run on male hardware, since it is self learning, it will become a male spirit. All the male specific gene activations will make it so.

So there are no male spirits in female bodies. Any spirit in a female body will have learned from all the female specific gene activations that befall it and will therefore be a female spirit.

So in conclusion. If you have a Y chromosome, then your body is male. If your body is male then since humans are at least as intellectually sophisticated as mice (I mean – hopefully we are) your spirit will have learned to be male from more than 1,000 male specific gene activations in your brain.

However there are so many sex hormones in the water we drink and chemicals in the food we eat these days, that people who are genetically one sex can feel hormonally that they are the other sex. But notwithstanding those feelings, every cell in their bodies is declaring what sex they actually are.

We know that a genetic male can change the look of the flesh of his body to be female by hormone treatment (although he does not change his skeletal structure as we see with the Trans swimmers who look like giant men from a skeletal standpoint).

This is very interesting because Adam said of his woman: This is bone of my bones and flesh of my flesh.

Trans ‘female’ athletes have an unfair skeletal advantage over genetic females, whatever their hormone levels now are. We have to look at both flesh and bones here to get the whole picture – as Adam suggested.

Firstly all sexual matters concerning children (heterosexual, homosexual, transsexual or alphabetsexual) should be determined solely by the parents who love their children and brought them into the world and paid large amounts of money after tax to look after them and to bring them up. Schools should have no say at all in any form of sex ‘education’ or sex ‘counselling’ for those below the age of consent for sex. Neither should any branch of government or social services or the family courts. We do not elect politicians to tell our children anything about sex, especially when they are below the age of consent for that activity,

Children do not have a vote. But they do have a right to innocence, which means no sexual interference from the state when they are below the age of consent on any grounds.
Women do have the vote. So they should also have the right to compete on a level playing field with people who do not have male skeletons.

Thirdly, there are no trans children and no trans adults – not even one. If you have a Y chromosome you are male and you have a male spirit. If you do not, then you are female and have a female spirit. The rest is all hormonal corruption, sociological corruption, consumer desire, sexual preference, internet influencer brainwashing etc. etc.