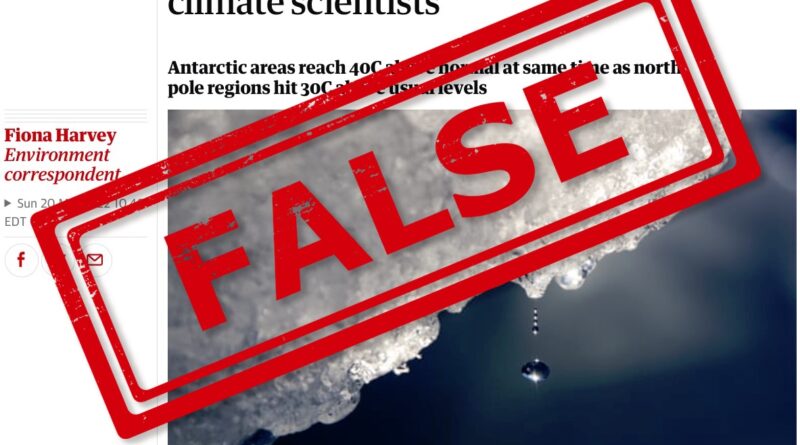 This past week two left-leaning media outlets, MSN (via The Washington Post aka WaPo), and the always alarmed UK-based The Guardian ran stories saying the Arctic and Antarctic had experienced “unprecedented” high temperatures. [bold, links added]

These claims can’t be verified since they were the results from a set of weather-model simulations, indicating variations of above-normal temperatures for the regions, not actual surface temperatures measured by ground-based weather stations.

The Guardian headline was full of worry courtesy of author Fiona Harvey:

Heatwaves at both of Earth’s poles alarm climate scientists

Startling heatwaves at both of Earth’s poles are causing alarm among climate scientists, who have warned the “unprecedented” events could signal faster and abrupt climate breakdown.

At the same time, weather stations near the north pole also showed signs of melting, with some temperatures 30C above normal, hitting levels normally attained far later in the year.

At this time of year, the Antarctic should be rapidly cooling after its summer, and the Arctic only slowly emerging from its winter, as days lengthen. For both poles to show such heating at once is unprecedented.

The key phrase here is: “weather stations near the north pole.” The northernmost weather station is Alert, Nunavut and it is 817 km (508 mi) from the North Pole.

That’s like trying to gauge the temperature in Indianapolis from a warmer temperature reading in Atlanta.

The coldest location on the planet has experienced an episode of warm weather this week unlike any ever observed, with temperatures over the eastern Antarctic ice sheet soaring 50 to 90 degrees above normal. The warmth has smashed records and shocked scientists.

“This event is completely unprecedented and upended our expectations about the Antarctic climate system,” said Jonathan Wille, a researcher studying polar meteorology at Université Grenoble Alpes in France, in an email.

“Antarctic climatology has been rewritten,” tweeted Stefano Di Battista, a researcher who has published studies on Antarctic temperatures. He added that such temperature anomalies would have been considered “impossible” and “unthinkable” before they actually occurred.

Both articles mentioned “climate” in the context of blame or contribution to these weather events.

To the uninitiated reading about these “events,” it must surely seem like evidence the planet is on its way to being wrecked from global warming, aka “climate change,” and that the polar icecaps are in danger of melting away to nothing.

The reality is entirely different.

The MSN article includes this graphic:

Figure 1 – the image that has scientists “flabbergasted.”

It always pays to read the fine print, and in this case, the MSN caption for that Figure 1 image (when you click on it at MSN to enlarge it) is telling:

Simulation of temperature differences from normal centered over Antarctica from the American (GFS) model.

That’s right, it isn’t the temperature that’s actually measured at the surface of that forlorn icecap, it’s a model simulation of temperature from a single climate model, the GFS model.

If we look at that same “model simulation” today from the same source, all of a sudden that “flabbergasting” image is gone, and temperatures are frigid again as seen in Figure 2 below.

Once again, the media proves itself incapable of differentiating between short-term model simulations of a weather event from long-term evidence of climate change.

Indeed, the “flabbergasting” spike in temperature may very well have been nothing but a glitch of mathematics in the model, and not actual weather.

Verifying actual weather is difficult. There are very few actual surface weather stations on the eastern Antarctic icecap and none at all at the North Pole. See more on this map.

In the Arctic, it is a similar story: after last week’s alarming model simulated “heatwave,” temperatures are back to their frigid normal as seen in Figure 3 below:

Surface weather stations in both the Arctic and the Antarctic are relatively recent developments in meteorology.

In the Arctic, the ice floats on the ocean. It is unstable, moves, and breaks up in the spring, making it nearly impossible to keep a weather station in one place, much less operational.

The U.S. National Oceanic and Atmospheric Administration (NOAA) started deploying floating weather stations and webcams in 2002 at the North Pole but gave up due to “funding constraints” in 2015.

In Antarctica, due to the extremely harsh conditions of temperature, blowing snow, and lack of sunlight to power solar cells, Automated Weather Stations (AWS) are few and far between.

Plus, such weather stations have only been present in Antarctica since 1978. The harsh environment often buries these weather stations in snow, leaving them with faulty temperature data, or completely inoperable due to solar panels being covered.

The AWSs have to be dug out of the snow each year.

This is why meteorologists often rely on mathematical simulations of the atmosphere to “guess” the temperatures of the air at the North and South Poles – they can’t always trust the actual data to be there or be accurate.

So, in summary, we have these points to consider about Arctic and Antarctic weather data:

Since we have at best 40 years of data and observations from the poles, is science capable of determining if weather events like the one modeled in Antarctica are “unprecedented” or not?

We simply don’t know if they are, because we haven’t been looking that long.

Indeed, science can’t say for sure if the brief spikes in temperature at the poles last week were real or simply a product of one flawed model’s simulation, a glitch in the numerical model output.

Even if it were real, one brief spike in temperature is not the same as a long-term climate change, which is defined as a trend of 30 or more years of data.

Yet somehow climate scientists are “alarmed” and “flabbergasted” at a single-day weather event simulated from a computer model.

Scientists (and journalists) that use those terms might be better off keeping a lid on their opinions until they have real data to confirm their “unprecedented” claims.

These researchers, and the corporate media outlets which uncritically parroted their claims, have presented no extraordinary evidence that either Antarctica or the Arctic experienced an unusual spike in warming.

Gratitude: No Matter How Humble, We Have More Than We Know

German U-Turn: Coal, Nuclear, LNG Back On The Energy Table