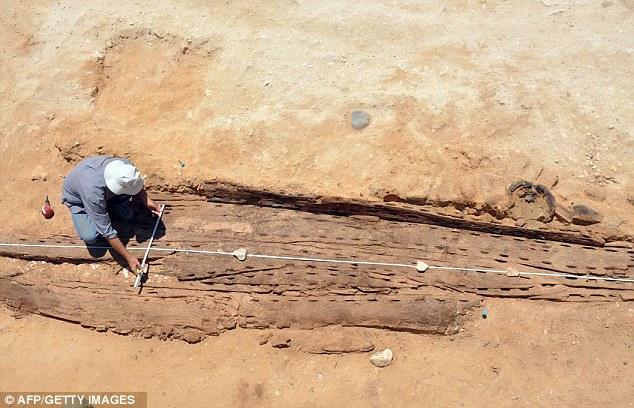 French archaeologists have discovered a 5,000-year-old wooden boat in an expedition in Egypt, it has emerged. The significant discovery was made in Abu Rawash, west of Cairo, the antiquities ministry in Egypt said.

Mohammed Ibrahim, the antiquities minister, said: ‘It goes back to the era of Pharaoh Den, one of the First Dynasty kings’.

The six-metre long and 1.5-metre wide pharaonic solar boat ‘is in good condition,’ he added.

Discovery: French archaeologists have discovered a 5,000-year-old pharaonic solar boat in an expedition in Egypt, it has emerged

Its planks are now undergoing renovation before it is put on display in a museum.

The pharaohs believed that solar boats, buried close to them at death, would transport them in the afterlife.

According to Middle East Online, the boat’s wooden sheets were transported to the planned  National Museum of Egyptian Civilisation where they will be restored.

Once the museum is finished, it is expected they will be put on display at some point next year.

The group of French archaeologists were working for the French Institute of Oriental Archaeology (IFAO). Significant: The discovery was made in Abu Rawash, west of Cairo Stunning: An archaeologist is seen working on the skeleton of the newly discovered wooden boat. The pharaohs believed that solar boats, buried close to them at death, would transport them to the afterlife

The group first started its excavation work in Abu Rawash in the early 1900s.

In 1954 an Egyptian archaeologist discovered what may be the Pharaoh Khufu’s 43-metre solar ship, made of cedar, in a Giza pyramid.

The 4,500-year-old intact vessel is on display near the pyramid.

It is one of the oldest, largest, and best-preserved vessels from antiquity and has been identified as the world’s oldest intact ship.

It is known as a ‘solar barge’, a ritual vessel to carry the resurrected king with the sun god Ra across the heavens.

PROOF OF UKRAINIAN NEO-NAZI SATANISM AND UNDERGROUND BIOLABS. IS PUTIN AT WAR WITH THE NWO?