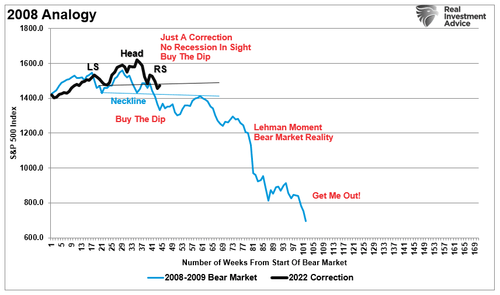 With the Fed now hiking rates, seemingly intent on doing so at every meeting in 2022, has the correction priced in the “bad news?”

The issue, of course, is that we never know for sure where we are within the current cycle until it is often far too late. An excellent example of this is 2008, as I discussed recently in “Recession Risk.”

“The problem with making an assessment about the state of the economy today, based on current data points, is that these numbers are only ‘best guesses.’ Economic data is subject to substantive negative revisions as data gets collected and adjusted over the forthcoming 12- and 36-months.

Consider for a minute that in January 2008 Chairman Bernanke stated:

‘The Federal Reserve is not currently forecasting a recession.’

In hindsight, the NBER, in December 2008, dated the start of the official recession was December 2007.”

I am NOT a fan of market analogs because it is simplistic to “cherry-pick” starting and ending dates to get periods to align. However, I am going to do it anyway to illustrate a point. The chart below aligns the current “head and shoulders” topping formation with 2008.

Notably, I am NOT suggesting we are about to enter a significant bear market.

I want to point out that in the first half of 2008, despite the collapse of Bear Stearns, the mainstream media did not foresee a recession or bear market coming. The advice was to “BTFD” as there was “no recession in sight” and “subprime debt was contained.”

Unfortunately, there was a recession, a bear market, and subprime was not contained.

The Difference Between A Correction And Bear Market

In 2008, the technical topping pattern, or a “head and shoulders” pattern, provided an early clue that the previous bull market had ended. For the non-technically adept, a review of the definition explains the chart above.

The head and shoulders pattern is believed to be one of the most reliable trend reversal patterns. It is one of several top patterns that signal, with varying degrees of accuracy, that an upward trend is nearing its end.” – Investopedia

In 2008 and 2022, we see apparent representations of this technical chart pattern. However, just because we find this chart pattern current, does it mean with absolute certainty we are about to enter into a deep bear market and recession?

That answer is “No.”

The difference between the current correction and a bear market is the presence of a recession. The chart is courtesy of @themarketear.

The chart suggests that given the initial correction depth, the market should have a reflexive rally. The difference between that rally failing and the market going lower, or rallying to new highs, is whether a recession is present.

So, the choice is simple. If you think the economy will avoid a recession, you should “BTFD.” If not, you should “STFR” and reduce your risk exposure.

Sentiment Is So Negative It’s Bullish

It is easy to become “trapped” into inaction during a market correction. For example:

If these phrases resonate with you, don’t feel alone. Such are prevalent emotions during a market correction that wears on our psyche.

There are several reasons to expect a market rally, and a potentially strong one, over the next couple of months. Such is despite the Fed hiking rates, the war in Russia, or a slowing economy.

Given the drawdown size, and if we follow the 2008 analog above, the technical price deviation from the 50- and 200-dma’s suggests a reflexive rally is likely.

Furthermore, as noted, sentiment is currently highly negative. Such historical extremes of negative sentiment, and investor positioning, are historically located near market bottoms.

While there are “no guarantees” when it comes to investing, there are periods when the data suggests the odds of success are weighted towards either “BTFD” or “STFR.”

At the moment, the odds seem to favor “BTFD.”

However, that does NOT mean that you should “BTFD” and then “Fugghettaboutit.”

As noted, we are talking about a reflexive rally. It is also one that should very likely sell into.

A Recession Is Probably Coming

As noted in last week’s post, there are many reasons to suspect the economy is either already or will be in a recession.

“In other words, the decline from the peak was “just a correction” as economic growth was still strong.

In reality, however, the market was signaling a coming recession in the months ahead. The economic data just didn’t reflect it as of yet. (The only exception was 1980 where they coincided in the same month.) The table below shows the date of the market peak and real GDP versus the start of the recession and GDP growth at that time.

The problem is in waiting for the data to catch up.”

Such is where we are currently.

We are looking at economic data in hindsight and making “guesstimates” about future outcomes without adjusting for potentially very negative revisions.

Maybe those revisions won’t be negative. It is a possibility. However, given that the Fed is tightening monetary policy, the flood of fiscal liquidity is now gone, and inflation is eclipsing wage increases, negative revisions are probable.

Furthermore, consumer confidence, which makes up roughly 80% of the Personal Consumption Expenditures (PCE) in the GDP calculation, is already in recessionary territory.

It is too early to “officially” declare a recession is imminent. No one knows with certainty. However, when it comes to portfolio management, hedging against the “risk” of an event is likely worthwhile.

Stick To Your Process

Current market conditions suggest that “BTFD” for a tradeable rally is likely. As such, there are some rules to taking advantage of it.

Just remember, if you are going to try and “BTFD,” don’t forget to “sell the rally.”

We are likely not out of the woods just yet. 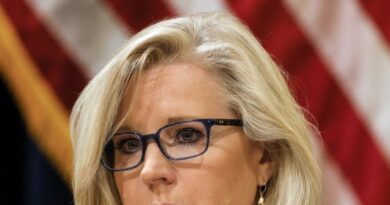