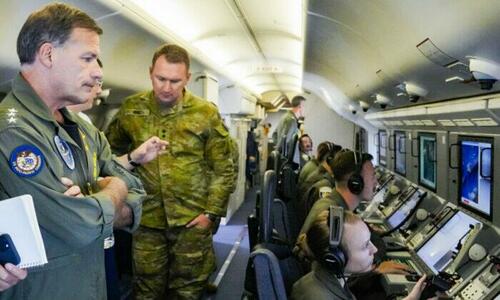 By Frank Fang of the Epoch Times

China has fully militarized at least three of the islands that the regime built in the disputed South China Sea, Adm. John Aquilino, commander of U.S. Indo-Pacific Command, said on March 20.

“I think over the past 20 years, we’ve witnessed the largest military buildup since World War II by the PRC [People’s Republic of China],” Aquilino told The Associated Press. “They have advanced all their capabilities and that buildup of weaponization is destabilizing to the region.”

“So that’s the threat that exists, that’s why it’s so concerning for the militarization of these islands,” Aquilino said. “They threaten all nations who operate in the vicinity and all the international sea and airspace.”

Currently, Aquilino said his mission is to “prevent war” through deterrence and promote peace and stability, in efforts that include working with U.S. allies and partners.

“Should deterrence fail, my second mission is to be prepared to fight and win,” Aquilino said.

As commander of U.S. forces in the Indo-Pacific, Aquilino oversees the largest combatant command, including 380,000 soldiers, sailors, Marines, airmen, guardians, Coast Guardsmen, and civilians working for the Pentagon.

China’s ruling communist regime is currently locking horns with Brunei, Malaysia, the Philippines, Vietnam, and Taiwan in a territorial dispute over reefs, islands, and atolls in the South China Sea.

While the United States isn’t a claimant to the disputed islands, it has deployed warships through the region in what it calls freedom of navigation missions.

A 2016 international ruling rejected the Chinese regime’s “nine-dash line” claim to about 85 percent of the South China Sea’s 2.2 million square miles. The ruling said that China’s claims had no historical basis and Beijing had violated the sovereignty of the Philippines by asserting territorial claims with its artificial islands built on reefs and sea rocks.

The Chinese Communist Party (CCP) has rejected the ruling. It has deployed coast guard ships and Chinese fishing boats, which sometimes have fishermen with military training aboard, to intimidate foreign vessels, block access to waterways, and seize shoals and reefs.

Aquilino applauded the Philippines for taking the territorial dispute to international arbitration, saying it was a good template to resolve the dispute peacefully.

The interview with the AP was conducted while Aquilino was aboard a U.S. Navy reconnaissance aircraft P-8A Poseidon, while the plane flew near China-held outposts in the Spratly archipelago.

China has seven outposts in the Spratly Islands and 20 in the Parcel Islands, according to the Center for Strategic and International Studies, a Washington-based think tank.

During the flight, the U.S. Navy plane was repeatedly warned by Chinese callers, telling the plane to leave what they said was China’s territory.

“China has sovereignty over the Spratly islands, as well as surrounding maritime areas. Stay away immediately to avoid misjudgment,” one of the Chinese radio messages said in a veiled threat.

In response, a U.S. pilot on the Navy plane radioed back to the Chinese, saying, “I am a sovereign immune United States naval aircraft conducting lawful military activities beyond the national airspace of any coastal state.”

“Exercising these rights is guaranteed by international law and I am operating with due regard to the rights and duties of all states.”

In January, the U.S. State Department released a study (pdf) on the legality of China’s maritime claims in the South China Sea. It concluded that the claims are “inconsistent with international law.”

“In the name of enforcing its expansive and unlawful maritime claims in the South China Sea, the PRC is interfering with rights and freedoms, including navigational rights and freedoms, that are due to all states,” said Constance Arvis, acting deputy assistant secretary for oceans, fisheries, and polar affairs, during a briefing following the publication of the study.

Erdogan Calls On Putin To “Make An Honorable Exit” From Ukraine