By Alex Kimani of OilPrice.com,

Oil and commodity markets have been taking out fresh highs after the shuttering of Ukrainian ports, sanctions against Russia, and disruption in Libyan oil production sent energy, crop, and metal buyers scrambling for replacement supplies. Russia is one of the world’s biggest exporters of key raw materials, from crude oil and gas to wheat and aluminum, and the possible exclusion of supplies from the country due to sanctions has sent traders and importers into a frenzy.

Base metals prices have been coming off recent highs (and in the case of aluminum, copper, and tin, all-time highs) set earlier in the month that were spurred by fears over the potential for disruption to Russia’s metal exports following its invasion of Ukraine. Broad-based supply concerns remain, ranging from the potential for sanctions targeting exports, to actual output disruption and logistical dislocations (see ‘Implications of the Russia-Ukraine crisis for metals’ for details).

But the Ukraine crisis is only layering onto another more powerful trend: the global transition to low-carbon energy.

The energy transition is driving the next commodity supercycle, with immense prospects for technology manufacturers, energy traders, and investors. Clean energy technologies require more metals than their fossil fuel-based counterparts, with prices of green metals projected to reach historical peaks for an unprecedented, sustained period in a net-zero emissions scenario.

But few, if any, green metals have witnessed a price explosion as epic as that of lithium.

After more than quadrupling in value last year, lithium carbonate continues to soar in 2022, according to Benchmark Mineral Intelligence. The mid-March assessment by the battery supply chain research outfit shows that battery-grade lithium carbonate (EXW China, ≥99.5% Li2CO3) is averaging $76,700 a tonne, up 10% over just two weeks and 95% since the beginning of the year. A year ago, the commodity was trading at $13,400 a tonne.

The rally in lithium hydroxide, used in high-nickel content cathode manufacture, is accelerating, up 120% so far this year, narrowing the discount to lithium carbonate, which historically is priced below hydroxide.

“Robust demand for material, and hence high prices, will be sustained in the near-term, with expectations that the seasonal recommencement of supply from domestic Qinghai brines in the coming months will provide little relief to the growing market deficit.“

Many investors who got burned by the last lithium price bust of 2018 have probably been watching on the sidelines, not sure what to make of the current mega-rally.

To be fair, China’s spot market, where small tonnages can have big price impacts, may be accentuating the scale of this mega-rally, but make no mistake about it: this is no false flag, with everything from mined spodumene to high-purity hydroxide, and every component of the lithium processing chain experiencing a wild price surge.

The price explosion tells you that lithium supply is simply nowhere near enough to feed this demand surge.

The last lithium boom five years ago was attributed to a failure by producers to anticipate the demand wave emanating from China’s subsidy-driven roll-out of EVs.

The subsequent supply response, particularly from hard-rock spodumene producers in Australia, proved to be overkill leading to the price bust of 2018-2020.

Consequently, new mines were mothballed, expansion projects were deferred, and many explorers folded operations and left to try their luck elsewhere.

Then suddenly, in a classic boom-bust-boom commodity cycle, it happened: lithium producers have been caught flat-footed again, ill-prepared to meet the current even stronger demand surge fueled by the global energy transition and EV revolution.

But the ongoing lithium boom has plenty of steam.

Many electric buses in China have switched to lithium iron phosphate (LFP) batteries. Two years ago, Tesla Inc. (NASDAQ:TSLA) introduced LFP batteries in its standard range Model 3s in China and dropped the starting price from 309,900 yuan ($48,080) to 249,900 yuan ($38,773). Last year, the EV kingpin Tesla announced that it’s switching battery chemistry for all standard-range Models 3 and Y from nickel cobalt aluminum (NCA) chemistry to an alternative, older technology that uses an LFP chemistry. CEO Elon Musk has revealed that the improving energy density of LFP batteries now makes it possible to use the cheaper, cobalt-free batteries in its lower-end vehicles so as to free up more battery supply of lithium-ion chemistry cells for Tesla’s other models.

But Chinese battery-makers are now discovering that you can play around with the metallic cathode mix as much as you want, but lithium still rules.

In a recent report, Benchmark Intelligence says that record-high Chinese lithium carbonate prices have pushed the costs of lithium iron phosphate – or LFP cells – higher than high-nickel cells on a dollar per kilowatt-hour basis, compared to a deep discount historically. Indeed, the analysts have warned that the chaos in nickel metal markets may spill over onto the metal’s use in the battery supply chain, potentially reversing the LFP trend.

We’ve Seen This Before… | ZeroHedge 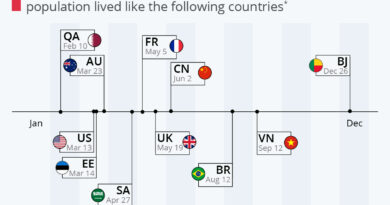 How Fast Are Countries Burning Through Natural Resources?